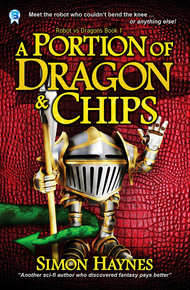 Simon Haynes was born in England and grew up in Spain. His family moved to Australia when he was 16.

Simon's goal is to write fifteen novels (quickly) before someone takes his keyboard away.

Update 2018: goal achieved and I still have my keyboard!

A Portion of Dragon & Chips by Simon Haynes

Welcome to the Old Kingdom!

Clunk, an elderly robot, just plunged into the sea off the coast of the Old Kingdom, and if he knew what was coming next he'd sit down on the ocean floor and wait for rescue.  Dragged onto the beach, coughing up seaweed, salty water and stray pieces of jellyfish, he's taken to the nearby city of Chatter's Reach, where he's given a sword and told to fight the Queen's Champion, Sur Loyne.  As if that wasn't bad enough, the locals still think the wheel is a pretty nifty idea, and Clunk's chances of finding spare parts - or his missing memory modules - are nil.  Still, Clunk is an optimist, and it's not long before he's embarking on a quest to find his way home.  Unfortunately it's going to be a very tough ask, given the lack of charging points in the medieval kingdom...  This is the first novel in a trilogy. Each book continues plot lines and character arcs from the previous title, with everything wrapping up in book three. They're not stand-alones!

Seaweed was a common sight along the beach, and was often used as a fertiliser. Unfortunately, it didn't pay well enough to drag it from the ocean and then cart up the long flight of steps to the city.

However, it wasn't the seaweed Pentonville was interested in. No, he could just make out a bronze-coloured flash of metal amongst the matted green strands. That was odd in itself, because anything metal should have sunk to the ocean floor.

The matted seaweed rode a wave, and as the angle changed, Pentonville realised the flash of bronze belonged to a figure lying on the natural raft. From the parts he could see, the figure appeared to be armoured from head to toe. Even if it wasn't wearing any valuable rings, its armour might fetch a pretty penny. More importantly, it would be one in the eye for Islington.

He was about to dash into the sea and pull the matted seaweed to the shore, thus claiming his prize. However, he was still irked at Islington, and he decided they might as well both get wet. So, he blew a piercing whistle, and when his fellow guard turned to look, Pentonville pointed at the seaweed. He saw Islington look, then look again, before hurrying into the surf. The water quickly reached his waist, and Pentonville realised any rings the figure might be wearing could vanish into Islington's pockets first. So, he threw aside his sword and charged into the water, gritting his teeth at the freezing cold.

They reached the seaweed together, and Pentonville's hopes were dashed. It wasn't an armoured figure lying face down on the raft, it was some battered old statue. Discoloured, dented and worthless, it had obviously been discarded years ago. He took one of its hands in his, raising the arm with effort, and scowled. The thing didn't even have any rings on.

"There you go," said Islington, with a laugh. "I said you could have the next find, and I'm a man of my word."

Pentonville shot him a venomous glance. The dented statue was so much junk, but he wasn't about to admit it. "Bet it's worth more than that tatty little ring you found. Hey, maybe it's got emeralds for eyes!"

Even so, Islington lent a hand, and together they rolled the statue onto its back. The eyes were yellow, and they stared at the sky with a look of resignation. They were surprisingly life-like, and they certainly weren't gems.

"I wonder who it belonged to?" said Islington.

"Who cares?" snapped Pentonville. "And who'd want it back? Look at the state of it!"

"It's a pity it wasn't rowing a boat. We could have filed our report and got back to the watch house in time for cards."

Pentonville groaned. Reports! This dented statue would take hours to write up, and then there was the question of carrying the thing all the way up the stone steps to the city. "I wish we'd never found it," he muttered.

"We could bury it," suggested Islington.