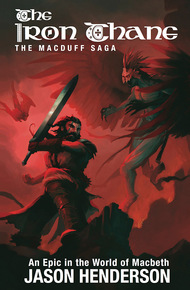 Jason Henderson is a Locus bestselling author of novels, comics and games. He's the author the hit Alex Van Helsing series, the creator of the comic Sword of Dracula and writer for the comic Ben 10 from IDW. He also hosts the weekly horror movie podcast, Castle of Horror. An attorney, Jason lives in Colorado with his wife and two daughters.

The Iron Thane by Jason Henderson

Lay on, Macduff! And damned be he who first cries Hold, Enough!

Macbeth was just the beginning.

Amid the smoke and chaos following the destruction of Scotland's mad king, the Prince of Dark Elves decides the time is ripe to unleash an assault on all of humanity. And he will begin by doing what he does best: stealing the souls of children to build his army.

The Erl-King's victory is not inevitable; he can be stopped—but those who have the power choose not to. The three immortal Sisters worry about Fate. Oberon, king of the lightning-fast little people, will not risk his legions. The Erl-King's own son, fully as powerful as his father, would fight, but his mother will not let him—and he is only five years old.

In all the world there is one who might bind together these disparate forces and lead them in battle against darkness: Macduff, Thane of Fife, a mortal who thinks he has outlived a destiny that has only begun.

Here is a test to find if your mission on earth is finished: If you're alive, it isn't.
—Richard Bach, Illusions

I have supped full with horrors; direness, familiar to my slaughterous thoughts, cannot once start me.
—William Shakespeare, Macbeth

Over the smoke of the dying campfire Macduff could see down the hill to his home. He churned the coals with a stick and watched gray and red mix. The night wind tossed his hair as it sped up the hill from the castle. I cannot sleep there.

It was a soldier that had first brought the troubles, a soldier and friend named Macbeth, who trafficked with the devil and became King of Scotland. Macbeth had fought and schemed and murdered to seize the throne. Once he had it, he fought and schemed and murdered more to keep it. And he was told by witches that no man of woman born could stop him.

Macduff watched the gray and red tumble, tasting soot, the ashes bleeding fire. He had left Scotland then, to find allies in England, to gather an army and overthrow Macbeth. It was while he was gone that Macbeth had sent his men to Dunfermline. Only Macduff's family had been there.

I am running through a hallway at Dunsinane looking for the mad king. I have returned with an army to strike at the heart of Macbeth's kingdom. As we swarm the castle, frenzied men shout to my left and right. Hired kerns are screaming and swinging their swords, blood is flying everywhere, but my sword remains sheathed. I am saving it. Once, I considered the king a good man. I am going to kill him.

He could see it all in the folding coals, could see the soldiers of the king sacking his house and cutting the throats of his children. His wife screaming his name as her own throat was ripped asunder. Cursing him as a coward. He was nowhere in—

Find the king. My God, my God, if you will lead me to the king, I will ask no more.

Through the blood I can see the master is at home.

Turn, hellhound! Turn! The bastard does not stir. Turn.

He recognizes my voice as I visualize taking off his damned head. Macbeth turns calmly to me. If I could praise him I would say he looked brave. If I gave a damn I would say he looked sad. The bastard tells me to leave. Get thee back, he says. My soul is too much charged with blood of thine already. My wife and children are screaming in agreement. I let fly my blade and his rises to meet mine. The clash of the metal is just another scream.

You cannot harm me, the king says. I bear a charmed life which must not yield to one of woman born.

Of woman born. His wife and children were still screaming in the metal as it sparked and danced in their power. Now another scream joined, in the castle and in the sword and in the churning red and gray, that of his mother, his first memory, of a woman whose child was too much to bear. The scream was muffled in sackcloth, throbbing with the swish of blood and pounding of heart surrounding him and in his brain. In the memory it is dark until it is dark, until it is dark and blood is pounding, until she is screaming, until you DIE, King! Macduff was not born. Macduff was RIPPED.

In my mind I am being held up, swathed in blood, and cannot stand on my own, and now the king's head is rolling like the ball I sewed for my son before he could walk. A doctor is holding me aloft by my right foot as I hold the king's head by its matted hair and set it fast upon a spear.

Macduff, the screams sang, in the quiet way that remembered screams do. All of the screams were there in the churning gray and red.

I am Macduff. My voice is in my sword.

The Erl-King stood still and felt the cold wind in his razor teeth. His eyes crackled bright and icy as he stared northward, to the kingdom he would soon devour. It was open to him, fresh, weak, and ripe for violation. So many. So perfect for a beginning. He threw back his glistening, silver mane. He smiled. He could taste blood.

So many. So perfect for a beginning.

And never, since the middle summer's spring,
Met we on hill, in dale, forest, or mead…
To dance our ringlets to the whistling wind,
But with thy brawls thou hast disturbed our sport.
—Shakespeare, A Midsummer Night's Dream

Dost not see the Erl-King, with crown, and with train?
My son, 'tis the mist rising over the plain…
My father, my father, he seizes me fast,
Full sorely the Erl-King has hurt me at last!
—Goethe, The Erl-King