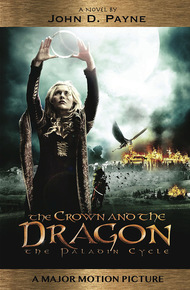 John D. Payne grew up in the American Midwest, watching the lightning flash outside his window and imagining himself as everything from a leaf in the wind to the god of thunder. Today, he lives with his wife and family in the shadow of the Organ Mountains in New Mexico, where he imagines that with enough concentration he might be able to rustle up a little cloud cover for some shade.

His debut novel, The Crown and the Dragon, is also a major motion picture produced by Arrowstorm Entertainment. His stories can also be found in magazines (Leading Edge), podcasts (The Overcast), and anthologies (All Made of Hinges: A Mormon Steampunk Anthology).

For updates, new fiction, and exclusive content, visit: https://www.patreon.com/johndpayne. And please tweet or DM @jdp_writes for a free short story ("Soul Invictus") that shows what the bad guys are up to after the 'happily ever after.'

The Crown and the Dragon by John D. Payne

In a country ruled by an occupying foreign empire, Elenn, an arrogant young noblewoman, accompanies her aunt on a mission to bring an ancient relic to the secret coronation of the rightful king of their people. When her aunt is murdered on the road by passing soldiers, Elenn hires a smuggler and criminal, Aedin, to escort her across the dangerous country so she can take her aunt's place at the coronation. But when Corvus, a rogue magister of the empire, employs a dark magic to retrieve the ancient relic for his own evil designs, Elenn must find the humility and strength within herself to fulfill her aunt's calling to unite her people before the power of the relic falls into the hands of the empire.

Aedin Jeoris was third in line to be hung. His head still rang from the sling stone that had knocked him out less than an hour ago. Vitalion justice was nothing if not swift.

The stink of burning hair and searing skin filled the air, because the Vitalion soldiers had branded them all as robbers. All but Aedin and three others. The four of them, with a brand on each arm already, had been slated for the noose.

"Know why they do it one at a time? Why we have to watch each other die?" asked the man behind Aedin, an ugly, bald brute named Leif. Getting no reply, he continued nonetheless. "Just to torture us. The Scales love to see us suffer."

"No," Aedin said with a shake of his head, "to break us. Get us to squeal on Garrick and the rebellion."

"Garrick the Dragon," spat Leif. "He's a dragon all right–raining down destruction on friend and foe alike. Him, the Scales, the Orders–they're all the same."

Aedin said nothing, distracted by the maddening sting of sweat in his eyes. He wanted desperately to wipe it away, but his wrists were bound behind his back. It wasn't fair. He had argued against the ambush. And he had bolted at the first glint of scale armor when the fat merchant caravan had turned out to be bait in a trap set by the Vitalion. But cavalry auxiliaries had chased him down and now here he stood, waiting his turn.

Twenty feet in front of him, a couple of soldiers cinched the noose tight around the neck of a man Aedin knew only as Dawes, who had been set on the back of a palfrey mare. Aedin counted more than fifty Scales milling around, some guarding the prisoners, others just spectators. There was no escape.

"Mercy!" Dawes cried, which elicited laughter from the Vitalion soldiers.

Dawes begged for his life as the soldiers threw the other end of the rope over the sturdy branch of a Renonian Oak, which grew tall up here by the Tay Barrows. A boy sitting up in the tree looped the rope around the branch a few times, tied it, and cut the slack rope free with his dagger.

Aedin's grandmother called Renonian Oaks 'pixie gallows,' because the long stems on the acorns made them look like little heads dangling from nooses. She had warned him never to close his eyes under their branches, or he would wake up in the world of spirits. Aedin had always heeded her before, but today he would have little choice.

"Almost wish I knew something to tell them," said Leif.

"Joke's on them," said Aedin. "You're too bloody stupid to be a traitor."

"Shut your flaming mouths," growled Orren, now the first in line. Like many Northerners, his dark hair and beard were braided in the fashion of the warriors of Minnaeus. "Another few minutes and you'll be meeting your ancestors. Show some respect."

A Sithian cavalryman took the reins of the mare. Dawes was now sobbing so hard that his pleas were incomprehensible, his face shining with tears and snot.

The Sithian walked the horse forward, slowly. As the mare stepped away from the tree, Dawes tried to grip it with his legs, but to no avail. He slipped off the back of the horse, swinging and spinning on the end of the rope.

"Bloody Vitalion," said Aedin, turning away. But with his arms bound, he couldn't stop up his ears, so he had to listen to the cruel jokes of the Scales as they watched Dawes kick and struggle for his last breath.

"Devil take them all," Leif said.

Dawes stopped kicking, and one of the soldiers–a sergeant, from the emblem on his helm–pointed at the man at the front of the line. Two soldiers grabbed him roughly by the arms and dragged him forward. This left Aedin next in line.

"What if there was, though?" said Leif. "I mean, what if we knew something."

"What have I got that they want?" said Aedin. "The location of a few loot caches. Think the Scales'll let me loose for that?"

"Depends," Leif said. "How much loot is in them caches?"

The scale-armored Vitalion soldiers knotted another noose, and the boy scurried out to tie the rope to another branch. As they set him on the horse, Orren was singing a patriotic hymn. So they stuffed a gag in his mouth.

"Not enough to win back my wife," said Aedin.

"That could still be a lot," said Leif.

The soldiers walked the horse away again, and as they did, Orren pushed himself up and kicked himself off the back of the horse. His neck broke immediately, provoking curses and groans of disappointment from the Scales as his body swayed gently back and forth. They cut another length of rope.

Leif was saying something, but Aedin could hear nothing but the rush of blood in his ears. No one stood now between him and his own personal pixie gallows. Soon, he would be just another acorn dangling from the branch.

The sergeant pointed his finger at Aedin, and two burly Vitalion soldiers strode forward and took hold of him. Beneath the tree, they were knotting the rope into a noose.

The Scales laughed, and dragged him roughly toward the tree. Aedin dug in his heels and struggled to free himself, but it was futile—and from their boisterous jeers, just the kind of entertainment the Vitalion had been hoping for. Even the boy sitting in the branches was smirking.

"Torture us all you like, Scales!" shouted Leif suddenly. "We'll never tell you how to find Garrick! We'll die first!"

"I don't want to die," said Aedin, his eyes open as wide as he could get them. "Don't want to wake up in the world of the spirits."

"Should have thought of that before you joined the rebels," said one of the soldiers. They lifted Aedin up on the back of the horse, and placed the noose around his neck.

"At the end of a rope, or in the dungeons at Tantillion," Leif cried, "it's all the same to the two of us. Let Corvus and his butchers have us for a week. We're warriors of Deira! Our secrets die with us!"

The sergeant held up his hand, and the soldiers stopped.

"What secrets?" said the sergeant.

"We'll see about that," said the sergeant. "Cut him down."