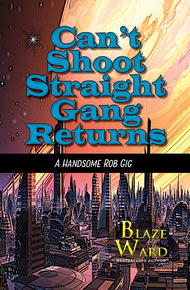 At least until the Lincolnshire government mucked everything up, reactivating his commission in the space fleet.

Time for another impossible mission: destroy a secret space station set up by a crime syndicate.

Just him. All by his lonesome. Against an entire fleet of criminal warships.

Time to get the band back together.

"Can't Shoot Straight Gang Returns"—a new novel set in the Alexandria Station Universe—pits pirates and crime bosses up against the greatest conman of all time, and a few of his friends.

He should have known it was trouble when someone knocked on the door way too early this morning. The sun was barely up. Only cops and reporters got out of bed at dawn.

Handsome Rob opened the door to his apartment by bracing his foot and his shoulder so nobody could knock him back easily. He had a pulse pistol in his hand, down by his side where it wasn't obvious.

Because whoever was out there was still banging loudly, the safety was off.

This was supposed to be his day off. Technically, his whole month off, have just completed another amazing, do-or-die mission for The Service, Lincolnshire's Guardia Civil Interior. Roberto Segura, Field Agent Extraordinaire.

As well as overly grumpy dude, mildly hung over as someone didn't have the decency to call on the comm he had silenced last night while drinking so he could sleep in.

The man outside wore a naval uniform. An officer. Never a good sign. At least he wasn't Shore Patrol.

Robb undid the series of deadbolts, chains, and doorstops so that he could open the door. The knocking ceased when the first lock clunked. Five later, Robb opened the door enough to scowl at the man in the hallway.

Unlike Rob, the man was pressed, ironed, and starched to trim perfection. Rob had shaved sometime in the last three days, if he was counting correctly.

Naval Commander, too. In full dress uniform at that. Jacket with ribbons and stuff across the front. Senior enough fellow. Way too important to be a flunky or messenger, unless there was an admiral involved.

That's what his identity papers said these days, anyway.

At least the last five were accurate enough for government work. Which was what he did.

"I have a message and papers for you, sir," the commander smiled brightly. "May I come in?"

Rob sighed. A year ago he had been a Courier for the Service. A messenger boy like this commander on his doorstep imitating a damned rooster.

Now he was a Field Agent. Decorated, even, although Jorge and friends had done most of the work. Still, it got him noticed as a man who got things done.

And apparently summoned shits like this guy to come over before lunch.

Rob stepped back quickly enough that the commander couldn't have reacted if he was going to charge. He did keep the pistol handy. And the safety off.

The commander followed him into the room at a polite march, closing the door before Rob could and coming to attention.

Rob felt tired just watching the guy. He looked like the type that had already run ten kilometers this morning, had breakfast, done a pile of paperwork, and then taken a delivery assignment to wake up a secret agent who had been asleep for about three hours at this point.

The man noticed the pulse pistol but didn't comment, which was good. Carefully, the commander reached into a pocket and pulled out a small packet that he held out carefully.

"Sit," Rob half-ordered, dropping into a chair and gesturing the man to the couch that probably still smelled like the perfume of that gorgeous redhead who had followed him home a few nights ago and had her way with him.

Oh, the sacrifices we make in the Service.

As the man finally sat, Rob cracked open the packet and pulled out the first page.

"Are you fucking kidding me?" Rob asked the man. "They've activated my reserve status and commissioned me as an officer in the Lincolnshire Navy? You people do realize who I work for, right?"

At least the commander had to courtesy to look pained at the accusation.

"It is my understanding, sir, that your previous…uhm…experience has been under a civilian rubric," he said carefully. "This operation is apparently falling under the Ministry of Naval Operations and you are being seconded by the Service to them for the time being. You will accrue retirement points and pay, sir, as the commission is being backdated to your original separation date."

Rob fixed the man with an ugly scowl. He liked being an agent of the Service.

Lincolnshire had a puddle-jumper navy, mostly composed of second-hand vessels purchased used from the Republic of Aquitaine Navy. Nothing larger than a frigate since they didn't have the local facilities to build or maintain them, but the galaxy had changed over the last few years.

However, stealing an experimental warship from Salonnia had brought him to the attention of the right people. Or the wrong people. And capturing one of Salonnia's senior captains, who had chosen to defect when the alternative was that Jorge would have just shot him out of hand.

Rob wondered if the old commodore had purchased a nicer retirement in Lincolnshire by telling more secrets after they'd dropped the man off.

Rather than answer the commander, Rob looked at the rest of the packet. It had a set of orders with his name at the top.

Investigate a supposedly-new, supposedly-secret naval base one of Salonnia's Crime Syndicates had set up near the juncture of Lincolnshire's space with Salonnia and Corynthe, the pirate kingdom currently under the sovereignty of an Aquitaine admiral named Jessica Keller.

Surveil the facility's capabilities for disrupting trade in the event of active hostilities between nations.

Eliminate said base by whatever means were necessary, while maintaining plausible deniability for Lincolnshire.

At least they weren't dreaming too small on this one. One man against an entire naval base, probably with half a dozen little warships set to blow his silly ass up when they caught him.

"Do you have oral orders to supplement these?" Rob asked wearily, standing.

A civilian agent would have been within their rights to refuse a suicide mission, which was why the first thing those bastards had done was to put him into uniform. Probably figured that would make him a good little Office of Naval Intelligence operative if he wasn't careful.

Of course, if those people hadn't failed in the first place, nobody would have been banging on Rob's door at such an ungodly hour.

"I do not, sir," the man said, also rising. "Instead, I was instructed to give you an hour to get presentable and then drive you to headquarters."

"Do they have an idea of how I'm supposed to do this?" Rob asked, waving the documents. He finally put the safety on so that he didn't shoot anyone this morning.

"No, sir," the commander grimaced. "I believe the admiral said we were in the Hail Mary stage of things. If this didn't work, we might have to beg Aquitaine for another Jessica Keller, or something."

Rob matched the man's grimace. A decade ago, she had blown up a pirate base on the surface of a planet not all that far from there by hitting it with an asteroid. En route to conquering all of Corynthe with a couple of tiny warships and a lot of audacity.

Rob smiled so suddenly that the commander took a defensive step back unconsciously.

"Audacity," Rob grinned. "That's what this is going to take."

"And?" the commander asked carefully.