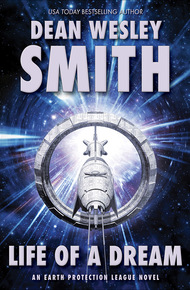 Life of a Dream by Dean Wesley Smith

Brian Saber and Dot Leeds constantly must leave their nursing home rooms and their aging bodies to fly across known space to save the Earth and the Earth Protection League.

They love the job, they love feeling needed.

But in the end, will being needed be enough?

A novel of hope and a future that will leave you smiling and wishing you could join the Earth Protection League, when you get old enough.

DOROTHY "DOT" LEEDS pulled herself slowly up to a sitting position, using the metal railing on her nursing home bed. The railing was cold in her hand and the room felt like it had a chill to it. She rubbed her old legs through her thin cotton nightgown, slowly, as if doing so would bring back some of the long, lost feeling to them. She had been dreaming again. Dreaming of dancing, as she and her husband used to do every Saturday night.

Like him, and most of the use of her legs, those days were long gone.

Yet every night, without fail, she dreamed of dancing. Usually the dream was of a small dance floor just big enough to swirl around. Often she was with her dead husband, Dave. Sometimes she was with a handsome man she couldn't exactly see clearly.

She could never really see the dancehall or who was watching around the edges. It was a dream and those people didn't matter.

Moving, dancing was all that was important. She loved the feeling of almost flying around the floor, the strong grip of her partner helping her float like a bird on a soft wind.

In this reality, at her advanced age, she was far from a bird in any form.

Around her, the Shady Valley Nursing Home was quiet.

The Christmas festive decorations filled the hall outside her open door, and later today she knew there'd be ham for Christmas Eve dinner. She had enjoyed that ham dinner for years now and actually looked forward to it, since the ham was always moist and soft and allowed her old teeth to chew it easily.

Then there would be turkey tomorrow for Christmas dinner. Sometimes they overcooked the turkey and it was tough, other times it had been moist and the dressing wonderful. The same two meals every Christmas for years now, since she had moved in here and her only son had moved from Chicago to the west coast and no longer took her out for Christmas or Christmas Eve dinners. Now he could only afford an occasional holiday call and a once-a-year summer visit.

She knew he felt bad about missing holidays, but her time was almost gone and he had a family to spend the holidays with and enjoy. He did what he could for her, she understood that. She didn't blame him at all and even had encouraged him to stay with his family at Christmas and let her enjoy her friends here.

She took a deep breath and kept rubbing her legs, slowly, trying to get any kind of feeling into them.

She could hear the faint ticking of Brian Saber's old wall clock across the hall, but nothing more.

It was now Christmas Eve day, very early in the morning actually, and for some reason, Christmas Eve always seemed to be quieter than any time of the year. Not even the snowstorm outside rattled the windows. The wind off Lake Michigan must have shifted as the weatherman on television earlier had predicted it would. It was amazing what people could do these days with science stuff.

She glanced at the blue numbers of her alarm clock. Two minutes after four in the morning.

"Oh, great, just great," she said softly to herself. It would be at least another hour before the night nurse stopped in to check on her. She was going to need to use the bathroom before then. That's what she got for having that second cup of tea. Now she was paying for it.

"Go slow," she whispered, talking to herself.

She rolled over and eased down the bar on the side of her bed, then levered herself slowly to the edge, and made sure her wheelchair was in position and the brake locked. Last thing she would need on Christmas Eve was that thing rolling away from her and her falling and breaking an old brittle bone.

Using the muscles in her stomach to control her legs, as she had taught herself to do twenty-five years ago after the car accident, she rolled on her side and moved her mostly dead legs off the edge of the bed. Then with a twist she had done hundreds of times, she half-dropped, half-lowered herself into her wheelchair.

She could still stand, still move her legs enough to shuffle, still walk in a very slow fashion with support and she did that as often as she could, but that took real focus and she felt better not trying to make it most places without sitting in the wheelchair.

The feeling of making it safely into the chair made her smile.

She often had the nurse or orderly help her out of bed just for safety, but still having the freedom to do it on her own was the most important thing she held onto.

At eighty-four years of age, freedom was everything. There sure wasn't much else.

She wheeled her chair around and headed for the bathroom.

She was halfway there when a cold draft whipped her nightgown around her legs, as if someone close by had opened a door.

Her sliding door led out to the front garden of the nursing home. It was closed and the drapes hung down limp. Her room's big metal door into the hallway was braced open as it always was at night.

She could see slightly in the faint light from the nurse's station and her nightlight in her bathroom. Nothing was out of place.

She must have imagined that or a ghost had drifted past her. So many people had died in this nursing home over the years, it wouldn't have surprised her if it was haunted.

She was about to continue on toward the restroom when she glanced out and across the hall.

There she saw a young man, shadowed and wearing some sort of dark uniform, pick eighty-five-year-old Brian Saber out of his bed and head for his room's sliding glass door. That door led outside into the cold winter night and the center courtyard of the nursing home.

There was nothing out there.

No one even went out there until the spring and summer and early fall.

At first she was stunned at what she saw.

"Get help, you idiot," she muttered. She was about to shout for the nurse when she heard Brian's distinctive laugh.

Whatever was happening, Brian was a part of it. He didn't seem to be minding at all.

Maybe it was some sort of Christmas gift from someone.

Maybe Brian's son was giving him a treat of some kind.

She knew he had one son, but they hadn't talked about him much at all, other than Brian was proud of him.

After a moment, the man carrying Brian had again opened the sliding door to Brian's room and the two of them had disappeared silently outside, leaving only a short draft of cold air behind as the door slid silently closed.

What in the world was Brian up to?

She talked with him a lot during lunches and dinners.

In fact, she considered him her best friend in the place, and if they had been younger by a few decades, she was sure they would have been having a fling, since Brian's wife had died about the same time as her husband.

Yet Brian had never mentioned doing anything like this. He seemed so down-to-earth, solid. Something crazy didn't make sense for him in her mind.

She waited, almost holding her breath in the silence of the nursing home night, then eased out into the hallway.

To her right was the bright-lit nurse's station, decorated in red ribbons and white bows. She could see the night-nurse's head sticking just above the top of the low counter. She was obviously bent over some paperwork and paying no attention at all.

Taking a deep breath, Dot silently wheeled her chair quickly the rest of the way across the hall and into Brian's room.

His bed was slept in, the blankets and sheet pushed back, his wheelchair beside his nightstand, his old wall clock ticked the seconds away.

She sat for a moment, listening to the wall clock count down the remaining time in her life.

This was so strange.

She moved to the sliding glass door that opened from his room out into a central courtyard. She pulled the curtain aside, not knowing what to expect.

There was nothing out there.

A cold Chicago night. She could almost feel the cold radiating through the glass to her thin skin. She shivered and moved closer to see where Brian had gone.

In the snow, she could see a man's tracks coming from the center of the courtyard to Brian's door, another set going back. But she couldn't see where they had gone.

Maybe through another door on the other side of the courtyard, but she had no idea why they would do that.

She had no idea why Brian would do any of this.

She eased her chair away from the window and moved it so she was sitting in the dark corner of the room.

She had a sneaking hunch Brian would be back very shortly. And she didn't plan on leaving until then, no matter how badly she needed to go to the bathroom.