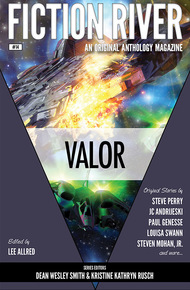 Future wars will be fought with new technologies and even on new planets, but one military constant will remain: the need for human valor.

Eleven skilled authors explore science fiction's military dimension as they rocket toward a doomed interplanetary invasion, grapple with cold-hearted aliens on the galaxy's lonely rim, and outwit space conquerors with nothing but their wits and two strong fists.

This latest volume of Fiction River celebrates the bravery and courage beating within the human heart.

As I went deeper and deeper into my Diving science fiction series, I realized that I was venturing into military science fiction. And I had not planned for it. I had no outline of the military system, no idea how the ranks worked, how the structure was set up—nothing.

Yet I needed it, and I needed to backfill it.

So I went—hat, ignorance, and miniscule data in hand—to my friend, Master Sergeant (Retired) Lee Allred. He smiled at me, then outlined things, and gave me books to read.

He knew what I needed because, in addition to his military career, Lee writes award-winning science fiction and scripts comics for Image, D.C., and Marvel. Plus, he's been a military science fiction reader as long as I've known him.

After he (kindly and gently) helped me get the details right, I got what writer Steve Perry calls a wild-hair idea. I wanted Lee to edit an issue of Fiction River. I mentioned it to the other series editor, Dean Wesley Smith, and Dean wholeheartedly agreed.

We had one condition: We wanted a story from Lee in the volume. It's the only story he didn't edit. I did. (Just so that you know, whenever an editor has a story in the issue that he edits, one of the series editors edits that story. We've done that from the beginning.)

Lee picked the topic and he picked the writers. He worked with some of the writers at a science fiction craft workshop that I ran just after we came up with the idea for this volume. He made the assignment and had some very strict rules about his military sf. He lectured the entire class in two different sessions—the first as he assigned the anthology, and the second as he discussed the stories.

I learned a lot from his lectures. And I learned what a military sf reader is looking for, which I hope will inform my military sf going forward.

Lee dug deep, asking some of his favorite writers for stories, finding excellent stories from newer writers, and coaxing great stories from writers who wouldn't normally write military sf. His own story has both valor and heart.

I'm so pleased to include Valor in the Fiction River family. This volume does exactly what Dean and I wanted when we put the series together: the volume provides a voice neither Dean nor I would have edited one half as well, if we thought of editing it at all.