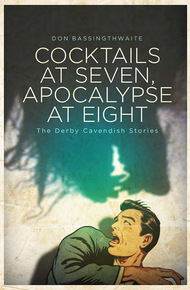 Don Bassingthwaite is the author of numerous fantasy and dark fantasy novels. His latest books are The Yellow Silk, Mistress of the Night (co-authored with Dave Gross), and the books of The Dragon Below trilogy: The Binding Stone, The Grieving Tree, and The Killing Song. Cocktails at Seven, Apocalypse at Eight is his first short story collection. Don lives with his partner in Toronto, surrounded by gadgets, spice jars, and too many books.

Cocktails at Seven, Apocalypse at Eight by Don Bassingthwaite

"I'm Derby Cavendish-that's pronounced Derby with an 'ar' sound, not an 'er': remember it for later. Ever since I was a boy, the forces of the otherworldly have been drawn to me like divas to a spotlight. But I'm ready for them. Bring it on, bitches."

He's the reason there are no zombies at Christmas, no fairy magic (the bad kind) at Gay Pride, and no werewolves (except one and he's a dear friend) at Hannukah. He's Derby Cavendish and for several years, Don Bassingthwaite has been bringing him to life at much anticipated annual readings. Now for the first time, these flamboyantly funny, supernaturally saucy stories are brought together in one fabulous collection. If you like your chills with giggles and glitter, Cocktails at Seven, Apocalypse at Eight is for you!

I knew something was wrong at the East Sykes United Christmas Bazaar when I opened my bag from the Ladies' Senior Auxiliary Grab-Your-Sack table and found a Ximec huahua fetish inside.

Fortunately, my trusted associate Matthew Plumper was with me. I grabbed him from where he was browsing the jams and jellies. "Do you know what this is?" I hissed, thrusting it under his nose.

Matt has extensive experience with things thrust-ing under his nose, but apparently a huahua fetish was new to him. His eyes crossed and bulged as he stared at the colourful ceramic stick, glazed as smooth and shining as a fresh Brazilian. "Derby Cavendish! Put that away!"

"Exactly," I said. "What is a huahua fetish doing at a church bazaar?"

I looked at the huahua, then at Matt, then back the huahua. "It's a fertility symbol."

"Ximec shamans used it to bring the dead back to life!"

Matt gave me a narrow glance. "How?" he asked.

The poor boy's eyes nearly popped out of his head. "Do you mean they—?"

I put my free hand over his mouth. "Please, Matthew. We're in a church. And it's Christmas." I held up the huahua. "We need to find out what this is doing here."

The same experience Matt has with things thrust-ing under his nose, I have with the supernatural and otherworldly intruding on my life. They seem to be drawn to me. I've had to study them for my own protection—and for the protection of those around me. A huahua floating around without proper attention is as dangerous as a man putting on a dress for the first time: It may look harmless, but you never know how freaky things might get.

My old friend Edie North was working the Grab-Your-Sack table when we stepped up to it. Edie, a lovely old dyke, is the reason I come to the bazaar every year. She's laid more carpet than Home Depot but her face still lit up when she saw the huahua in my hand. "Derby, you lucky mincer! You got Faith McGilligan's fruitcake faddler."

"Her fruitcake faddler. At least that's what she called it. She said it was the secret to her Christmas cake. Usually fruitcake batter can get too thick to mix, but her faddler made it easy. She used to say she'd never need a man around as long as she had her faddler."

I raised my eyebrow at her. "Really, Edie?"

Matt giggled. I kept my face solemn. This was a serious matter. "She'd been using it for thirty years? And nothing unusual ever happened?"

Edie shook her head. "I'll say this: whatever the thing is, it makes for a damn good fruitcake. As far as I'm concerned, Faith was welcome to call it whatever she wanted. Apparently her great-great-grandmother was a missionary somewhere in Mexico and brought it back. It became a family heirloom, passed from mother to daughter. Faith cherished it like nothing else. Mavis Anderson asked to borrow it one year and the way Faith reacted, you'd think the thing came with a scrotum and a wedding ring."

I pounced on that little clue. "If she cherished it so much, why is it up for grabs at a church bazaar?"

I may have gotten a little excited. Matt elbowed me like a bride at a wedding dress sale and Edie looked appalled. "Moved! She retired to Fort Lauderdale last summer. When she downsized, she decided it was time to pass the faddler on and gave it to her daughter-in-law, Joy. But Joy didn't want it—she donated it to the Grab-Your-Sack."

"How come you didn't take it, then?" Matt asked.

"First rule of Christmas bazaar," said Edie. "Nobody takes from the donations." She wrinkled her nose. "Plus there were too many of us who wanted it. Someone would have noticed. Derby, if you wanted to sell that ugly lump of pottery, you could get a good price for it around here."

I squeezed my fist around the huahua. "I'm attached to it like it had a scrotum, Edie. But tell me: Where can I find Joy?"

It turned out that Joy was also at the bazaar, manning the bake sale. As we hurried downstairs to find her, Matt asked me, "Derby, if Mrs. McGilligan used the hoohoo stick—"

"Whatever. If she used it to make her fruitcake for thirty years, maybe there's nothing to worry about."

That was when we turned the landing and almost tripped over a staggering man with cheap jeans and dead eyes. He might have been a husband dragged to the bazaar against his will, but there was something dark and sticky smeared around his drooling lips. Matt squeaked and pressed himself back against the wall. The man ignored him, swinging his head toward me—and the huahua stick. When I moved it, his eyes followed and he gave a low moan. I raised the stick high. He reached for it.

I kicked him neatly in the balls. I dated a soccer player for two months once and some of the things I learned then still come in handy. "Sorry," I said as he crumpled to the stairs, moaning more than before and clutching himself like he was looking for a prize. I grabbed Matt and pulled him after me.

"Oh my God!" Matt yelped. "What was wrong with him? What was that around his mouth?"

"Fruitcake," I said grimly. "We have something to worry about."

The bake sale was set up near the front door of the church, a temptation for anyone entering or leaving. We slid to a halt in the middle of it. "Joy McGilligan?" I called.

A sour-faced woman who didn't look like she'd ever had a huahua near her hoohoo glanced up. When she saw the stick in my hand, her mouth puckered even tighter. "Take that thing away! I don't want it back!"

I brandished it at her. "Did you use this to make fruitcake?"

She snorted. "Do you want some?" She reached behind the table, pulled out a basket, and set it down. It made a thud as if it were filled with foil-wrapped bricks. "Mother McGilligan swore by her faddler, but I tried using it and my batter just turned into a sticky lump around it. My husband could barely pull it out."

I had no doubt that he had trouble pushing it in, too, but aloud I said, "I understand the faddler was a McGilligan heirloom. Did your mother-in-law give you special instructions for how to use it?"

Joy looked at me like I was insane. "She said to only stir clockwise. How stupid is that? What difference would that make?"

Clockwise. From left to right. The path that the sun follows from dawn to dusk. I drew myself up. "It makes the difference between life and death. Who has eaten this fruitcake?"

Maybe some of the danger had filtered into her mind. She looked a little frightened. "No one. We kept it aside in case we ran out and still needed something to sell. No one has eaten any of it yet."

"Oh, that's not true," said a sprightly woman behind the next table. "We took some of everything for the tea room. Plenty of people will have eaten it there—everyone loves the famous McGilligan fruitcake." She smiled just a little too sharply at Joy.

Joy glared back at her. "You're still mad about the faddler, aren't you, Mavis?"

There was no time for their petty arguments. I seized the basket of fruitcake, pushed it into Matt's arms, and swept from the bake sale back through the church hall to the parlour where the tea room was located.

My timing was, as always, superb. Just as we reached the tea room doors, they flew open. Terrified parishioners came racing out. "Call 9-1-1!" someone screamed. "They've gone crazy!" screamed someone else.

A teenaged girl with more piercings, heavier make-up, and a clearer sense of reality than her elders hit the nail on the head, though. "Fucking damn it, call the army—they're fruitcake zombies!"

Indeed they were. Standing my ground, I let the frightened mob pass by, then stepped up to the doors. Inside the parlour, a dozen of East Sykes United's fine, upstanding members grunted and moaned as they shuffled around the room. Dark and fragrant fruitcake smeared their faces. Tea and punch stained their clothes. Baked goods caked their hands. And I knew in my gut that at any moment, their craving could change from Christmas sweets to sweet, sweet flesh.

"Derby!" Matt whined. "Do something!"

One works with what one has. I raised the huahua high and I said "Stop!"

The zombies stopped—and turned toward me, their deadened eyes going to the ancient fetish. For a moment, they were still, awed by the power of the huahua.

Then they gave a collective moan and lurched toward me.

I held out my free hand. "Fruitcake!" I ordered.

Bless Matt's flapping little ass, if there's one thing he does well, it's respond to commands. Instantly, a heavy package slapped into my palm. Without pausing to unwrap it, I tossed it to the zombies. They fell on it like paparazzi on a slipped nipple.

"That won't hold them for long," I said, taking the basket of cursed fruitcake from Matt. "Go back to the bake sale and bring everything you can."

I looked down at the fruitcake piled into the basket and an idea crept into my head. "Find me rum," I said. "A lot of rum. I think this cake looks a little dry."

And that was how the minister, the head of the Ladies' Senior Auxiliary, and half of the choir ended up being carried out of the tea room at the East Sykes United Church Christmas Bazaar suffering from alcohol poisoning and badly upset stomachs. One works with what one has and I had fruitcake soaked in enough rum to put the zombies down while I used the huahua to undo Joy McGilligan's unwitting curse.

Of course, no one at East Sykes will ever know that I saved the bazaar, Christmas, and possibly the world from a fruitcake zombie apocalypse. They blame it all on mass hysteria and rivals from the Anglican Advent Market armed with a tray of pot brownies. I'm happy to let them think that. There are some things better kept secret. Besides, I'm Derby Cavendish—and I know that I'm the meanest fruitcake there is.