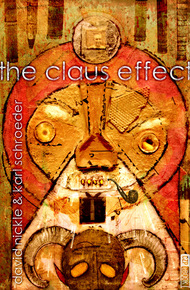 David Nickle is a Toronto-based author and journalist whose fiction has appeared in magazines and anthologies like Cemetery Dance, The Year's Best Fantasy and Horror, the Northern Frights series and the Queer Fear series. Some of it has been collected in his book of stories, Monstrous Affections. His first solo novel, Eutopia: A Novel of Terrible Optimism, led the National Post to call him "a worthy heir to the mantle of Stephen King." His novel Rasputin's Bastards was called supernatural eeriness at its best. The novel The 'Geisters was published in 2013, followed by the collection Knife Fight and Other Struggles. Volk, the sequel to Eutopia, will be released in 2017. He also works as a reporter, covering Toronto municipal politics for a chain of community newspapers.

Karl Schroeder is a professional futurist as well as a science fiction and fantasy writer, dividing his time between writing fiction and analyzing, conducting workshops and speaking on the potential impacts of science and technology on society. As the author of ten novels he's been translated into French, German, Spanish, Russian and Japanese. In addition to his more traditional fiction, he pioneered a new mode of writing that blends fiction and rigorous futures research—his influential short novels Crisis in Zefra (2005) and Crisis in Urlia (2011) are innovative "scenario fictions" commissioned by the Canadian army as study and research tools. Karl holds a Master's Degree in Strategic Foresight and Innovation from OCAD University in Toronto. As a boy Karl would stand in his back yard on -30 degree nights and watch the stars, imagining all the wonders he might see up there if those pesky northern lights weren't in the way.

The Claus Effect by David Nickle and Karl Schroeder

It's the 1990s. The Cold War is over, the Soviet Union is down for the count—and the Free World is getting ready for its first nuclear-free Christmas in decades. Only one thing in the world can ruin it.

Who can forget the horrifying events of The Toy Mill (Nickle & Schroeder's 1993 Aurora-Award-winning story), in which a malevolent, post-industrial-revolution Santa Claus granted Emily, a little girl, a Christmas wish—and her desire to be a Christmas Elf nearly destroyed the world? It's eight years later, and Christmas should be a joyful time—shouldn't it? Not with Santa on the loose! Events propel the now-teenaged Emily and West Point Cadet Neil Nyman on a breakneck journey through suburban shopping malls, Ontario cottage country, and the frigid northern wastes of the former Soviet Union—battling displaced Cossacks, blue-blooded cottagers and homicidal, downsized elves along the way. Finally, they must face down the terrifying truth: about Christmas, the New World Order—and The Claus Effect.

From orbit, the line through the ice might have been mistaken for one of the snaking gas pipelines that scar the white snows of the high arctic.

The line was about the right width, and it was nearly long enough. It must have glittered fiercely in late October or November, in the days when the sun was still setting. All such light was long gone before Cadet Lieutenant Neil Nyman stepped into the trench to trace the line's formidable length.

Breath making a frost in his throat, he paused and savoured the vision in his image-starved mind. From high orbit, he might have seen a tracery of gold across the frozen ice plains, the sunlight caught for a long, arctic instant in its cross-section, an illusory shaft of fire, nestled in the deep blues and purples of growing northern shadow. The green, shattered faces of ice on the trench's walls reflected a hint of that glory now, in the more modest glow of Neil's U.S. Navy-issue flashlight beam.

He moved south along the deepening path, which undulated with a kind of liquidity and in places even extended in murky scaffolds over his head, so that the trench nearly became a tunnel.

A tunnel melted and refrozen, marking the searing passage. . . .

The passage of what?

Neil kept his face covered against the tongue-peeling cold of the arctic night. The face-cover, like the parka, snow-pants, boots and gloves that also he wore, was white as the driven snow, and covered everything but his eyes. The cold was painfully intense, but at the moment his curiosity was even more powerful—how and when had this perfectly straight trench appeared, just fifteen kilometres south of the DEW line? It was ominous that it lay less than a half-day's march from Neil's current home, Station Black Ice.

He squinted, then his eyes widened, and he switched off the flashlight to see if what he thought he'd seen was true.

A little light winked, far down the trench where perspective made the walls converge into a dark point. As he watched the light flickered again.

Neil broke into a run. He kept the flashlight dark and at his side, so as not to lose sight of the faint spark, and his breath became stale and damp in his face-cover, and the branches of frost on his goggles mutated into vast trunk and root networks. He ran, but as he approached the end of the trench, the spark became harder to see.

By the time he finally stumbled and fell into a broader crater of ice where the trench ended, he had lost sight of it altogether.

He hauled himself up next to a triangular monolith of ice near the crater's bottom, and stared.

"Mug," he said through his face-protector. Frustration, suffocation and hypothermia had caught up with Neil, so he yanked the face-protector away. "Fu—" he began, as he pulled the goggles from his eyes. "Meevuf," he finished, as the unfiltered arctic air froze the soft tissues in his throat and mouth, and he saw with unfiltered vision the thing at the trench's end.

It was gigantic—big as a Chinook helicopter, massive as an Abrams tank, shaped a bit like both. Half the thing was melted, candle-wax in steel, and although none of it gave off any light, it did gleam a bit in the starlight. Neil could feel his eyes freezing, his tongue growing numb, but before he put the goggles back on he flicked on the flashlight. He played the beam over bent pistons; valves that temperatures and forces of unguessable magnitude had stretched and curled into screaming mouths; a great cauldron-belly of a furnace, torn along its side to reveal the edges of a dark mystery within; and the snaggle-toothed blade of a circular saw that poked above everything else, like the rising crest on a big lizard's spine. His footsteps crunched as he stepped closer, and looking down, he saw that he was standing not on ice, but on shattered glass—it flashed red and green, extending around him in a great, iridescent lawn. Here and there among the shards he saw little glass spheres, the size of golf balls.

He would have sworn they were Christmas tree ornaments.

And it's only six days before Christmas, he thought suddenly. How long had this thing been here?

He knelt and examined the drifted snow. This part of the arctic was dry; before dropping him off here, his Northern Survival instructor had shown Neil how to count time in certain kinds of arctic ice by measuring its layers, like rings in a tree. He split a small berg of hard snow that had grown over some of the glass balls, and shined the flashlight against the exposed pith of ice. He counted the thin lines of grey—pollution carried here annually all the way from Detroit, Sudbury and Archangelsk, or even farther south.

There were eight layers.

Neil sat back, stricken with memory. Eight years ago his life had changed forever.

It was six days until Christmas, the first Christmas Neil had ever spent alone. And it was exactly eight Christmases since. . . .

Neil wasn't aware of the cold as he buckled up the face-cover and lowered the blinding goggles again. Christmas of 1983. Eight years ago, but he remembered it like it was yesterday.

If he could have smiled around his frozen cheeks, laughed through the frosted cilia in his lungs, Neil would have.