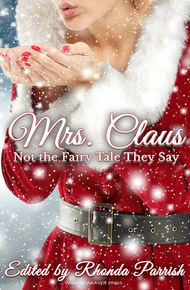 Rhonda is the editor of several anthologies including, most recently, Fire: Demons, Dragons and Djinn and Tesseracts: Nevertheless.

In addition, Rhonda is a writer whose work has been in publications such as Tesseracts 17: Speculating Canada from Coast to Coast and Imaginarium: The Best Canadian Speculative Writing (2012 & 2015). Most recently she co-authored a paranormal non-fiction book, Haunted Hospitals, with Mark Leslie and her YA Thriller, Hollow, is forthcoming from Tyche Books.

Mrs. Claus - Not the Fairy Tale They Say by Rhonda Parrish

When you think of Mrs. Claus, do you imagine a quiet North Pole homebody who finds complete fulfillment in baking cookies, petting reindeer and crafting toys alongside elves? How about a magic-wielding ice goddess, or a tough-as-nails Valkyrie? Or maybe an ancient fae of dubious intentions, or a well-meaning witch? Could Mrs. Claus be a cigar-smoking Latina, or a crash-landed alien? Within these pages Mrs. Claus is a hero, a villain, a mother, a spacefarer, a monster hunter, and more. The only thing she decidedly is not, is a sidekick.

It had been a long time since I'd attended the Council, so I suppose I should have anticipated that not everyone would recognize me. Still, I wasn't expecting to be challenged by a vampire bodyguard.

"Nobody gets close to the Skeleton King," he growled, putting an arm across the elevator door.

I didn't care if I were close to the Skeleton King—who, by the way, isn't a king at all, because Halloween isn't a kingdom and so doesn't have a monarch. He is, of course, a skeleton, but that hardly makes him special. But I did care that if I didn't take this elevator, I was going to be late.

I could have appealed to the dark-suited Skeleton King, standing in the back corner of the elevator with another vampire goon, but he was on his phone and I didn't want to bother him. Also, there's something to be said for taking care of your own problems, and I didn't want to appeal for permission to enter the elevator I'd been riding long before this vamp was undead.

I put a hand on his arm to gently but firmly lift it out of my way and started to step inside. The vampire twisted to plant a hand on my solar plexus and shoved hard. I stumbled back against the brick wall opposite the elevator door, more surprised by the audacity than hurt by the attack itself. Vampire goon came after me, kicking over one of several trash cans lined up in the ill-lit alley. It was one of the old metal kind, and it clattered over the cement and spat refuse as its lid skittered free.

The movement and noise pulled the Skeleton King from his phone call, and while it's harder to read a face with no eyebrows, his posture definitely stiffened, even for a figure made entirely of bone. "Frank," he said, taking a step out of his corner. "I think you should—that is Mrs. Claus."

"Mrs. Claus?" Frank the vampire bodyguard didn't seem to get it. "What's she doing here? She's not

I stomped on the upturned rim of the metal trash can lid, flipping it into the air, and caught the handle left-handed as it rotated toward me. I punched it solidly into his face and felt a satisfyingly solid connection.

"Shield boss, actually," I quipped, but he didn't catch my terrible pun because he was busy stumbling backward and trying to stay conscious.

The Skeleton King sighed (don't ask me how, paranormal biology is not my field of expertise, except the part about opening things up for easier examination) and made an excuse into the phone before hanging up. The second bodyguard was already protectively stepping between his employer and me, but the Skeleton King pushed past him to address the first. "Frank...."

But Frank's blood was up, or whatever you call it in vampires and, shaking off the pain and disorientation, he came at me with bared fangs and extended fingers hooked like talons. I swept his arms with a quick shield-circle which broke one of his wrists and then caught him under the chin with the heel of my right hand, lifting him from the cement as I stepped forward. I curled my fingers over his now-very-closed- mouth and threw him on his back.

But Frank wasn't the only one whose blood was up, and I was already in motion. I whirled the makeshift shield around and slammed the rim into Frank's face. They both dented.

"Sparkle that," I said. It wasn't my best line, and it was really just petty, but I was annoyed. The Skeleton King's shoulders dropped. "It was his first week." I tossed aside the misshapen trashcan lid and pointed at the damaged vampire. "He started it." "He didn't know who you were."

"Maybe you should give your goons some sort of manual when you hire them, so they can read up on what they're supposed to be doing and who they might be dealing with. Then they won't walk up and pick a fight with a valkyrja." I looked at the second bodyguard, who seemed uncertain if he should be trying to intervene himself between me and his principal. "Yes," I said, "in case you didn't do any more homework than Frank, I'm a Valkyrie. Might want to remember that the next time you think about some sort of baking joke."

Second bodyguard glanced from me to his boss and then back at me, giving a quick, jerky nod.

"Great. Now that that's finished, can we share the elevator? Council meeting isn't going to wait on account of Frank."

The King gestured. "Step in."

We left Frank to his eventual recovery and rode up eighty-seven floors to the Council's meeting place, a long expensive table in a large expensive room surrounded by expensive windows overlooking an expensive view. It was like a board meeting for the very worst of Hollywood corporate villains, except that we weren't a board.

Or villains. Some of us have better publicity or methods than others, true, but all of us have the best of intentions.

I'm probably the iffiest of the lot, because I didn't come in for a good cause, but by marriage. This was already a bit odd, as few of the other Council members are married, and if you know anything about Valkyries, you know we're not exactly an embodiment of the Christmas spirit, but Nick had enough political clout and general accrued goodwill that no one made too much of a fuss about it.

You may have heard about Santa Claus having some attributes of the Norse god Odin, the beard and the flying and the frozen North address? He got those associations through me.

The table was mostly full when the Skeleton King—excuse me, Halloween—and I entered. I took a

seat between Easter and Administrative Professionals' Day. When gathered, we are known by the holidays we represent, rather than by our own names. It saves confusion when times change and representative entities shift or are replaced. (The years of the Easter/Paschal controversy were particularly difficult.)

"Welcome, Christmas and Halloween," said this year's chair, National Tartan Day. He was nervous in his post, probably not accustomed to this much concentrated attention. He was one of the newer days of recognition rather than a proper holiday, admitted under our recent inclusion program. "Now we can begin."

I bided my time for the administrative trivia and general catching up on old business. It was about half an hour or so before we were ready for new business.

"Christmas, you have something to put forward?" "I do, Mr. Chair. Someone is making war on Christmas."