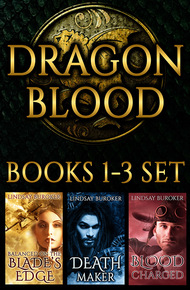 Lindsay has early memories of convincing childhood friends, pets, and stuffed animals to play the roles of characters in her worlds, so it's safe to say she's been making up stories for a long time. She published her first novel, The Emperor's Edge, in December of 2010 and has written and published more than 50 science fiction and fantasy novels since then. She's been nominated twice for the Goodreads Readers' Choice Awards.

A thousand years have passed since a dragon has been seen in the world. Science and technology have replaced magic, which has dwindled until it has become little more than an element of myth and legend.

There are those who still have dragon blood flowing through their veins, distant descendants of the mighty creatures of old. These rare humans have the power to cast magic, the power to heal, and the power to craft alchemical weapons capable of starting wars… or ending them. But they are feared for those powers, and in recent centuries, they have been hunted nearly to extinction.

The few remaining survivors must find a way to change how humanity perceives them or be lost to the world forever.

A delightfully entertaining tale drawing together the worlds of magic and steampunk into a romantic adventure. The characters pull you into their story and help you lose yourself, as you imagine watching them triumph over adversity, finding love along the way. – Terry Mixon, SFWA

Colonel Ridge Zirkander had walked the hall to General Ort's office so many times he suspected his boots were responsible for the threadbare state of the drab gray carpet runner. The two privates standing guard on either side of the door were too well trained to exchange knowing smirks, but that didn't mean gossip of this meeting wouldn't be all over the citadel by noon. It wouldn't be the first time. Fortunately, uniforms only held awards and not demerits.

"Morning, gents." Ridge stopped before the door. He eyed the privates' rifles—they had the new lever-action repeating models—but neither man looked like he had been given orders to keep visitors out. Too bad. "How's the general's mood today?"

"That applies to most days, doesn't it?" He didn't expect an answer—privates weren't encouraged to chat about officers after all, at least not where said officers might overhear—but the younger one grinned and responded.

"A week ago last Thursday, it elevated to agitated, sir."

"Glad I was in the air that day then." Ridge thumped the fellow on the shoulder and reached for the doorknob.

The private's grin widened. "We heard about the battle cruiser, sir. That was marvelous. I wish I could have seen it."

"Taking down the supply ship was more of a victory for us, but I suppose that didn't come with the added excitement of being shot at by cannons."

"I'd love to hear about it, sir." The private's eyes gleamed with hope.

"Might be at Rutty's later," Ridge said, "if the general doesn't send me down to the kitchen to chop vegetables with the recruits."

He walked in without knocking. Mounds of paperwork were heaped on General Ort's desk, but the man was gazing out the window overlooking the harbor, his weathered hands clasped behind his back. Merchant, fishing, and military vessels sailed to and from the docks, but, as always, Ridge's eye was drawn to the dragon fliers lined up on the butte on the southern end. Their sleek bronze hulls, propellers, and guns gleamed under the morning sun, beckoning him to return. His squadron was out there, overseeing maintenance and repairs, and waiting for him to bring them news. He hoped this ego-trouncing session would also include the delivery of new orders.

When the general didn't turn around right away, Ridge flopped into a plush leather chair in front of the desk, flinging his leg over the armrest.

"Morning, General. I got your message. What can I do for you this fine day?" Ridge nodded toward the blue sky above the harbor, a sky clear of enemy airships as well as clouds.

Ort turned, his customary scowl deepening as he waved at Ridge's dangling boot. "No, no, have a seat. I insist."

"Thank you, General. These chairs do lend themselves to lounging in comfort." Ridge patted the soft leather. "If anyone ever succeeds in foisting an office on me, I hope it'll be furnished just as finely."

"Seven gods, Ridge. Every time you see me, I wonder anew how you got so many bars on your collar."

Ort pushed a hand through his short gray hair, sat down, and pulled out a folder. Ridge's folder, though he had to have it memorized by now, all of its three inches of thickness. "You're forty years old, Colonel. Are you ever going to grow up?"

"I've been told it's more likely I'll be shot down first."

Ort folded his hands across the folder without opening it. "Tell me what happened."

"In regard to what, sir?" Ridge asked. He knew perfectly well, but he had long ago learned not to volunteer information that might incriminate him.

"You don't know?" Ort's ever-present scowl deepened until the corners of his mouth were in danger of falling off his chin.

"Well, my squad's been on the ground four days. Could be a lot of things."

"According to my report, you broke Diplomat Serenson's nose, bruised his ribs, and threatened to rip off his penis. Any of that sound familiar?"

"Oh," Ridge said, nodding. "Yes, it does. Although, I believe it was his flesh pole I threatened to rip off. There were ladies present, and some find anatomically correct terms too blunt for polite company."

The general's jaw ground back and forth several times before he managed a response. "Explain."

"That slimy turf kisser had cornered Lieutenant Ahn and was groping her and trying to usher her outside. She was about to slam a fist into his face herself, but I stepped in, figuring she might not appreciate your plush leather chairs the way I do." Actually, his ace lieutenant, who had nearly as many kills on the side of her flier as he did this year, had been wearing the most conflicted expression, like she might have actually let Serenson drag her outside and paw her up, since he was such an important delegate. To the hells with that—nobody's uniform required that kind of sacrifice.

"Breyatah's Breath, Ridge, couldn't you have defended your officer without starting an international incident?"

Possibly, but he wouldn't have found it nearly as satisfying. Besides… "International incident? We're already at war with the Cofah, and this was just a reminder of why we broke away from their rule in the first place. They think they can have anything they want. Well, they can't. Not my country, and not one of my people."

Ort sighed and leaned back in his chair. "It's good to know you care beneath all your irrepressible impudence, but the king was at my throat like an attack dog this morning. This is serious, Ridge. Serenson wants you sent to Magroth."

Ridge snorted. His crime hadn't been that severe. Only convicts went to the Magroth Crystal Mines, convicts who would have otherwise been marched out to the firing squad. Very few thought the sentence of life in the mines with no chance of parole was an improvement.

The general pulled a sheet of paper out of the top of Ridge's file and laid it on the desk. "You leave in the morning."

"I—what?" For the first time, real unease settled into the pit of his stomach. He had left his blessed dragon figurine dangling in the cockpit of his flier, but maybe he should have brought it along, or at least rubbed its belly for luck that morning. "That's not very damned funny, sir."

The king? The king wouldn't send him to his death. He was too valuable to the war effort. Ridge started to shake his head, but halted, realization coming as his gaze dropped to the typed sheet of paper. Orders. They weren't sending him as a criminal, but as an officer. A contingent of men guarded the secret mines, the location known only to those high up in command—and those who had been stationed there.

"You want me to guard miners, sir? That's the infantry's job and one for a bunch of enlisted men." Sure, there had to be a few officers there to run administration, but there couldn't possibly be a posting for a colonel. "Or are you demoting me along with this… reassignment?" Ridge almost gagged on the last word. Reassigned! Him? All he knew how to do was fly and shoot; that's all he had done since graduating from flight school. He was only vaguely aware of the location of the mines, but knew they were in the mountains, hundreds of miles from the coast, from the front lines.

"Demotion? No, not a demotion. Read the orders, Ridge." Ort smiled for the first time in the meeting, the kind of smile a bully wears after pummeling some scrawny kid on the brisk-ball court. "The king and I talked about this at great length this morning."

Ridge picked up the sheet and skimmed. Yes, a reassignment. To the position… He lowered the sheet. "Fortress commander?"

"I believe that's what it says, yes." Ort was still smiling. Ridge preferred his scowl.

"That's… that's a position for a general." Or at least someone with experience leading battalions of troops, not to mention the administration background a man should have. All Ridge had commanded were squadrons of smart, cocky officers not unlike him. What was he supposed to do with a bunch of infantry soldiers? Not to mention the gods knew how many murdering prisoners that roamed the tunnels?

"In times of war, it's not uncommon for less experienced officers to be forced to work in positions above their pay grade."

"What happened to the current commander?" Ridge muttered, imagining some poor general with a miner's pickaxe driven into his forehead.

"General Bockenhaimer is due to retire this winter. He'll be extremely grateful to be relieved early."

Ridge stared down at the orders, his eyes blurring. He barely managed to check the date. A one-year assignment. Who would command his team while he was gone? Who would pilot his flier? He had always thought… he had been led to assume—no, people had told him, damn it—he was indispensable out there. The war wasn't over—if anything, this year had seen more fighting than any of the previous four. How could they send him off to some remote gods-forgotten outpost in the mountains?

"I know this is hard for you to stomach, Ridge, but I actually believe it's for the best."

Ridge shook his head. It was all he could do. For once, he had no words, no quip with which to respond.

"You're an amazing pilot, Ridge. You know that. Everyone knows that. But there's more to being an officer than shooting things. This will force you to mature as a soldier and as a man." Ort hitched a shoulder. "Or it'll kill you."

Ort waved a hand. "You have your orders. Dismissed."

Ridge left the chair, giving it and the harbor out the window a long look before he headed for the door. Grounded. For a year. How was he going to survive?

"Oh, and Colonel?" the general said as Ridge walked for the door.

Ridge paused, hoping this had all been a joke designed to teach him a lesson. "Yes?"

"Pack warm clothes. Autumn is just about over in the mountains." The general's smile returned. "And Magroth is at twelve thousand feet."