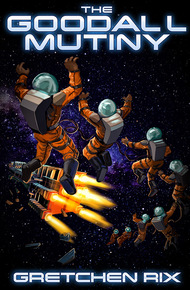 World traveler (parts of it, anyway). Climbed the West Texas Davis Mountains (hills by most standards). Scaled the heights of Scotland's Hadrian's Wall (the part that's three feet high). Sailed the seven seas (actually, only the Caribbean and only on cruise ships leaving out of Galveston). Ran through the Louvre (the tour only lasted one hour) frantically soaking up atmosphere and culture. Has been to Las Vegas, New Orleans, and Cape Hatteras. Knows what an Oxford comma is, but doesn't normally use it. Writes entertaining books.

The Goodall Mutiny by Gretchen Rix

Wary of her youngish captain. Afraid of edges, of conflict, of having to take charge, Lieutenant Joan Chikage is soon thrust into the leadership role she has so far avoided. As the highest ranking officer left on the doomed lower decks of the deep space cargo ship Goodall, it's up to Chikage to save her crew. Including the captain's cat. Their portion of the ship has been jettisoned away from the rest. And time is running out.

I came across The Goodall Mutiny by Gretchen Rix while book reviewing and it stuck with me as a great candidate for this bundle. A murder mystery in space, it's a tense, quick story of a woman pushed into leadership when disaster overtakes her ship. – Cat Rambo

Chikage could see the decision to disobey her orders as it formed in her ensign's thoughts. It showed in his eyes.

The curl of his lips betrayed his intent; even his posture, suddenly turning rigid with tension, telegraphed his decision.

Chikage knocked him flat on his back with an uppercut to his chin, the hell with regulations. With the captain sailing merrily away from her doomed crew, she was top officer.

She'd do what she needed to.

She watched as he spat a trickle of blood out of his mouth. Did it taste metallic to him, like hers always did during their boxing exercises together?

She hoped so. It would make her scratched, bruised and aching hand all the more worth it.

She grimaced in distaste. Tiberius had escaped the sack when she struck her ensign, but she saw where he slunk off to. The cat would keep. Her hand needed attention, but wouldn't get it.

"I'd think twice before doing what you're planning, Van der Ryn," Chikage said, pointing her weapon down at his chest.

One hand trembled, so she aimed at him two-handed.

Then she continued her little speech. "I know you don't think I deserve this command, but be grateful for small favors. I've got it. The responsibility's mine. You just have to follow orders."

"You'll get us killed," he snarled. He bared his teeth at her. Van der Ryn sounded like a wounded animal getting ready to strike. Smelled like one, too.

Was he fancying himself as that lion in the poster he'd put on the wall? The one with the silken lady holding onto its mane?

Or was this just more posturing.

It would be difficult disarming her from down on the floor like that. Chikage bet on the posturing.

As Van der Ryn tried to lever himself up, he glared straight into her face. Chikage deliberately turned to stare past him at the void, and at the Goodall leaving them in her wake.

If he was going to make a move on her, he'd make it then.

"We've been dead ever since the ship got hit," Chikage told him. "And you know it."

She returned her attention to him, wondering if he'd be any use to her. He certainly hadn't thought she was any use to him up till now.

Her blunt assessment of their fate brought a slump to his shoulders. Chikage heard him suppress a moan that he covered by sniffling.

She caught herself sniffling in response, and in rubbing her hand under her nose found she had indeed been dribbling. What a picture she must have made. But it was past time to be embarrassed about it. It was time to do something.

She wiped her hands on her uniform.

It was too damned cold, and getting colder by the hour. They didn't need to worry about starving to death, they'd probably freeze first.

She saw surprise in his face. Thought she also caught admiration there, at least for a split second.

Chikage holstered her weapon and then extended her hand to pull him to his feet. His hand felt clammy. Hers felt like a piece of ice. She let go as soon as she got him up.

She'd deflated him quite enough, she decided. Time to pump him back up a little bit. She didn't need him defeated, just not actively working against her.

And most of all she needed to get the both of them away from that edge. Even the elevator shaft had been better than this.

He shook his head. "Haidar can fix it," Van der Ryn told her. "And he's already up there."

He looked at Chikage as if he expected her to affirm something. "We can't do anything from this level," he explained. "You'd save time if you just called him on the communicator, lieutenant."

She feared that neither Leichter nor Haidar would answer her call, but Van der Ryn's suggestion made more sense than forcing him to climb the rungs to the next level and then check section by section for the two of them.

So she tried contacting them once again with her palm-set. They knew better than to answer the wall communication posts.

"Haidar. Leichter. This is Lieutenant Chikage. Report in. This is Chikage. Answer this communication."

Chikage heard her own voice go out over the connection, flat, defeated, un-commanding. Chikage had attacked the task as if there was no use doing it, recognizing it in her tone of voice too late to correct it. She saw Van der Ryn blanch.

"All right," she told him. "All right." There was one other thing she could try.

Chikage straightened her shoulders. She turned away from Van der Ryn and looked out into the abyss. Light shone from the Goodall, which was moving away from them with every second she wasted.