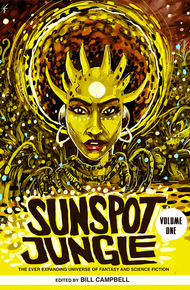 In celebration of Rosarium's fifth anniversary, publisher Bill Campbell has collected a two-volume collection of 100 science fiction, fantasy, and horror short stories from around the world. Like space and the future, Sunspot Jungle has no boundaries and celebrates the wide varieties and possibilities that this genre represents with some of the most notable names in the field.

Sunspot Jungle, edited by Bill Campbell, is jammed full of one of my favorite things to read and write: short stories. Rich in variety and pulled from around the world, the book showcases how wide-ranging speculative fiction can be. It also features some of my favorite writers, including Saladin Ahmed, Sarah Pinsker, Geoff Ryman, and Angela Slatter. The volume also celebrates Campbell's Rosarium Press, which is consistently publishing awesome stuff. – Cat Rambo

The Master who came for Enri was wearing a relatively young body. Sadie guessed it was maybe fifty years old. It was healthy and in good condition, still handsome. It could last twenty years more, easily.

Its owner noticed Sadie's stare and chuckled. "I never let them get past fifty," the Master said. "You'll understand when you get there."

It turned the body's eyes to examine Enri, who sat very still in his cell. Enri knew, Sadie could see at once. She had never told him—she never told any of the children because she was their caregiver and there was nothing of care in the truth—but Enri had always been more intuitive than most.

She cleared her throat. "Forgive me, sir, but it's best if we return to the transfer center. He'll have to be prepped—"

"Ah, yes, of course," the Master said. "Sorry, I just wanted to look him over before my claim was processed. You never know when they're going to screw up the paperwork." It smiled.

Sadie nodded and stepped back, gesturing for the Master to precede her away from the cell. As they walked to the elevator they passed two of Sadie's assistant caregivers, who were distributing the day's feed to Fourteen Male. Sadie caught Caridad's eye and signed for them to go and fetch Enri. No ceremony. A ceremony at this point would be cruel.

Caridad noticed, twitched elaborately, got control of herself and nodded. Olivia, who was deaf, did not look up to catch Sadie's signing, but Caridad brushed her arm and repeated it. Olivia's face tightened in annoyance but then smoothed into a compliant mask. Both women headed for cell 47.

"The children here all seem nicely fit," the Master commented as they stepped into the elevator. "I got my last body from Southern. Skinny as rails there."

"Exercise, sir. We provide a training regimen for those children who want it; most do. We also use a nutrient blend designed to encourage muscle growth."

"Ah, yes. Do you think that new one will get above two meters?"

"He might, sir. I can check the breeder history—"

"No, no, never mind. I like surprises." It threw her a wink over one shoulder. When it faced forward again, Sadie found her eyes drawn to the crab-like form half-buried at the nape of the body's neck. Even as Sadie watched, one of its legs shifted just under the skin, loosening its grip on the tendons there.

She averted her eyes.

Caridad and Olivia came down shortly. Enri was between the two women, dressed in the ceremonial clothing: a plain low-necked shirt and pants, both dyed deep red. His eyes locked onto Sadie, despairing, betrayed, before he disappeared through the transfer room's door.

Sadie led it into the transfer center. As they passed through the second gate, the airy echoes of the tower gave way to softer, closer acoustics. The center's receiving room had jewel-toned walls, hardwood floors, and luxuriant furniture upholstered in rich, tasteful brocades. Soft strains of music played over the speakers; incense burned in a censer on the mantle. Many Masters liked to test their new senses after a transfer.

This Master gave everything a perfunctory glance as it passed through. Off the receiving room was the transfer chamber itself: two long metal tables, a tile floor set with drains, elegant mirror-glass walls which were easy to wash and sterilize. Through the open doorway Sadie could see that Enri had already been strapped to the left table, facedown with arms outstretched. His head was buckled in place on the chin rest, but in the mirrored wall his eyes shifted to Sadie. There was nothing of anticipation in that gaze as there should have been. He knew to be afraid. Sadie looked away and bowed at the door as the Master passed.

The Master walked toward the right-hand table, removing its shirt and then paused as it noticed the room's door still open. It turned to her and lifted one of the body's eyebrows, plainly wanting privacy. Sadie swallowed, painfully aware of the passing seconds, of the danger of displeasing a Master, of Enri's terrible unwavering stare. She should stay. It was the least she could do after lying to Enri his whole life. She should stay and let his last sight through his own eyes be of someone who loved him and lamented his suffering.

"Thank you for choosing the Northeast Anthroproduction Facility," she said to the Master. "At Northeast your satisfaction is always guaranteed."

She closed the door and walked away.