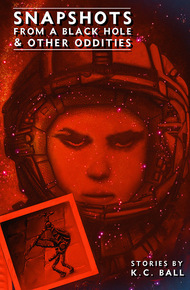 K.C. Ball (1947-2018) lived in Seattle, Washington, a stone's throw from the waters of Puget Sound. She became an addict of the written word as a child in Ohio and began writing fiction full-time in 2007.

Snapshots from a Black Hole & Other Oddities was her first short-story collection. Her short fiction appeared in various online and print publications, including Analog, Lightspeed, Flash Fiction Online, and Murky Depths (the award-winning British fantasy magazine) as well as many others.

Her novel Lifting Up Veronica was serialized online by Every Day Publishing beginning January, 2012, and was printed in book form of May of that year.

Snapshots from a Black Hole and Other Oddities by K.C. Ball

From the event horizon of a distant black hole to the junk that orbits the Earth, from a dystopic future to multiple dimensions within our own timeline, KC Ball's stories are filled with the humor and humanity that made her a Writers of the Future winner./

Snapshots from a Black Hole & Other Oddities/sends you on a whipsaw journey through mind of author K.C. Ball. A mix of flash fiction and longer work, science fiction and fantasy, humor and gravitas, the stories in Snapshots will linger long after you've set the book down.

It means a lot to me to have Snapshots from a Black Hole and Other Stories by K.C. Ball in this collection. I am intimately acquainted with its pages, having been its editor, and its author was a personal friend who died last year and is sorely missed. K.C.'s visions are funny, poignant, and full of human beings trying to do the best that they can. – Cat Rambo

Thirty years ago, this voyage would have been impossible. BH/Hawking's not very large, but its intense gravity would have torn Einstein and Wanderer apart. Now, thanks to the new tidal-gradient compensators, the mission's only dangerous as hell.

Instruments aboard Wanderer ceaselessly collect data while its massive nuclear-pulse engines struggle to maintain a stable orbit against forces that want to suck the ship into oblivion.

The engines produce a fearsome racket but inside Wanderer it's church quiet. Each of the ship's one-point-six-five-million pieces has been tuned to exact specifications. A perfect jigsaw puzzle that nullifies the noise.

Sensor arrays, drives and fuel-containment systems, tidal compensators, communications gear, and radiation shielding fill almost every square centimeter. The bit of room left for Chloé and her life-support suit accepts just that and not one single scruple more. She doesn't so much ride in the ship as wear it.

Of course, Chloé doesn't have to be on board. A level-four A.I. orchestrates the show just fine without her. But humans hate to be replaced by a machine, even when you know we can do the job better at far less risk.

So Chloé lays her life upon the line, two subjective hours out of every twenty-four, to orbit BH/Hawking, hoping to wrestle free its secrets. Two shifts left. Still so much to learn.

And twelve kilometers above Chloé, tethered to Einstein by a tractor field, Andy Mercer hunkers in a shielded observation pod too small to have a name.

Andy makes immersives—you know, grabbies. He watches Chloé's every move, hears each grunt and exhalation, captures what she tastes and smells and touches, everything except her thoughts, through long-range sensors. He's risking his life too, recording every little detail of this grand adventure for all of you back home.

You're curious, aren't you? You want to see what's in the darkness, as much as any of the twenty members ofEinstein's crew. And you want to know why the world directorate laid out one hundred, ninety seven billion for the trip.

It's your money. You paid for a ticket, you deserve to see the show. Let's be honest though. The science stuff is boring. You really want to be around in case it all goes wrong.

In the deepest, darkest, meanest corners of your hearts, all humans want that. You watch disaster from a distance and if someone dies, so much the better. You can whisper to yourself, "Thank God that wasn't me."