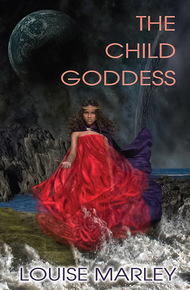 Louise Marley is an award-winning writer of fantasy, science fiction, and historical fiction. Twice the winner of the Endeavour Award, her work has been shortlisted for the Campbell Award, the Tiptree Award, and long-listed for the Nebula Award. Much of her work is influenced by her first career as a classical singer, most recently her novel Mozart's Blood. As Louisa Morgan, she is the author of the recent popular novels A Secret History of Witches andThe Witch's Kind. Louise lives on the Olympic Peninsula in the Pacific Northwest.

The Child Goddess by Louise Marley

The Child Goddess is a novel set in the same universe as The Terrorists of Irustan, with the reappearance of the enigmatic Jin-Li as a helper to Mother Isabel Burke, a Roman Catholic priest. Isabel, a medical anthropologist, is sent to the world of Virimund to investigate the history of a young child who doesn't age. The child, Oa, becomes both her ward and her guide to a strange world where a virus has created a group of ancient children. Isabel fights to protect Oa and the other children from a greedy Earth corporation eager to exploit them.

The Child Goddess by Louise Marley is a lovely novel, and last year when assembling a similar bundle, I had to choose between it and Louise's The Terrorists of Irustan. That was a tough choice indeed and so I'm very happy to include it now. Louise is one of my favorite people — besides being a talented and hard-working writer, she's an opera singer and a gracious lady. – Cat Rambo

"Isabel, come in," the Mother General said, and Isabel obeyed.

A stranger rose at her entrance. He wore a light suit with pencil lapels and a matching shirt, a fashionable look out of place among the simple wooden shelves of paper books, the racks of disks that crowded Marian's office. His smile was pleasant, but when Isabel shook his hand, a sense of emptiness, a sort of hunger, distressed her. She managed to say, "How do you do, Mr. Markham," and released his hand as quickly as she dared.

"Mother Burke," he said. "I've been hearing great things about you."

Isabel turned to Marian, one eyebrow lifted. "Yes," the Mother General said. "I've been giving Mr. Markham your resume, Isabel." She sat down behind her desk, and Isabel took a chair. Markham stood where he was, hands thrust into his pockets, smiling his bland smile.

"Would you like to explain, Mr. Markham, or shall I?" Marian said.

He pulled his hands out of his pockets and rubbed them together. "I'm happy to do it. Mother Alexander. Thank you." He smiled down at Isabel as if he were about to give her very good news. "Have you ever heard of Virimund, Mother Burke?"

Isabel linked her hands in her lap and tried not to look away from his face. "One of the expansion worlds, I think?"

"Right, right. I've been telling Mother Alexander, here, that Virimund is mostly ocean, but with a ring of equatorial islands. Moderate climate, no moon. ExtraSolar has established a branch of Offworld Port Force on one of the islands to construct a hydrogen retrieval facility—a power park. For the long-range transports, you know. Fuel cells. Electricity."

He sat down in the chair next to her, leaning forward. She inched back in her chair. "The problem is. Mother Burke," he said. "We found people there."

He nodded. His face adopted a grave expression. "It seems one of the emigrant ships of the old U.N. found this planet and landed there."

Isabel glanced at Marian. The Mother General was staring at her cluttered desk. Isabel turned back to Markham. "The discovery of a lost colony is a remarkable event, isn't it? But none of this has been in the news services."

"You're right. ESC and Port Force decided it's best to keep this under wraps for the moment. Until we can figure out what's happened.

"My superior—the General Administrator of Earth Multiplex—is hoping you can help us."

Warily, she asked, "Figure out what? Has anyone communicated with these people?"

His eyelids flickered. "Well," he said. "Not really." The bland smile returned. "That's why we need you. Mother Burke. We need an anthropologist.

"And we thought a Magdalene would be best, would be . . . would be sensitive to our needs."

Isabel folded her arms. "Who are these people?"

He cleared his throat. "Well, it seems—that is, ExtraSolar thinks they were from one of the first ships. A colony from Africa. The Sikassa."

"You're not answering my questions, Mr. Markham. What do you know about them? Their history, their culture—who led them?"

Marian put in, "I told you, Mr. Markham. Isabel is a determined woman."

"Has there been recontact?"

Markham's smile wavered slightly. "You have to understand, no one realized they were there—no city lights, no radio signals. Then when the Port Forcemen saw smoke and so forth, they did a fly-over, and found an inhabited island." He coughed again. "I only read the reports, of course. But there was an incident."

"What kind of incident?"

The Mother General said, "It was a tragedy, Isabel. We don't want it to happen again."

Markham sighed. "One of our people died, a man named Garcia. And two of the Sikassa were injured. Our guys didn't know what to do, so they carried them back to the power park, to the infirmary. One of the Sikassa recovered, but the other—ahem—expired."

"This is appalling," Isabel breathed. "How could this have happened?"

"It was most unfortunate," Markham said lamely. "But the hydro workers didn't mean to hurt anyone. They were attacked, spears and knives thrown at them by this gang of children. Caught them by surprise, so they said."

Isabel straightened, her back rigid with indignation. "Let me see if I understand, Mr. Markham. Your workers killed an indigene, a child. And ExtraSolar is keeping it quiet."

"How long since the emigration? Three centuries? I doubt very much they think of themselves as Earth citizens." Isabel spoke bitterly. There had been other offenses committed by the ExtraSolar Corporation in its rush for expansion, offenses protested by the Global Coalition, by World Health and Welfare, by the Church. She fixed Marian with a challenging gaze. "Why would the Magdalenes become involved with this disaster?"

The Mother General nodded acknowledgment of the irony. She laid her hands on her desk, palms down. "Isabel. There's more."