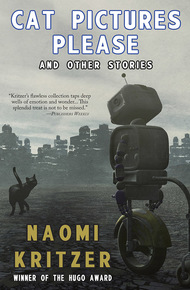 Naomi Kritzer has been writing science fiction and fantasy for twenty years. Her short story "Cat Pictures Please" won the 2016 Hugo and Locus Awards and was nominated for the Nebula Award. CAT PICTURES PLEASE AND OTHER STORIES was released in 2017, and her YA novel CATFISHING ON CATNET (based on "Cat Pictures Please") will be coming out from Tor in November 2019. She lives in St. Paul, Minnesota with her spouse, two kids, and four cats. The number of cats is subject to change without notice.

Cat Pictures Please and Other Stories by Naomi Kritzer

Acclaimed writer Naomi Kritzer's marvelous tales of science fiction and fantasy are now collected in Cat Pictures and Other Stories. Here are seventeen short stories, including her Hugo Award-winning story "Cat Pictures Please," which is about what would happen if artificial intelligence was born out of our search engine history. Two stories are previously unpublished. Kritzer has a gift for telling stories both humorous and tender. Her stories are filled with wit and intelligence, and require thoughtful reading.

Cat Pictures Please and Other Stories by Naomi Kritzer is another story collection. I loved the title story, which won Hugo and Locus awards, and which was a Nebula finalist. Therefore I was delighted to find that Fairwood Press had collected it with others of Kritzer's stories in a collection that showcases her wit and talent. – Cat Rambo