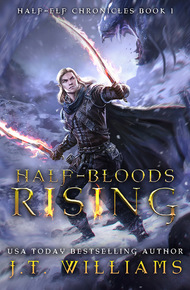 USA TODAY BESTSELLING author J.T. Williams writes both epic fantasy, inspired by the likes of Tolkien, Salvatore, and Brooks, along with darker sword and sorcery, fueled by countless hours playing Elder Scrolls, The Legend of Zelda, and many other fantasy RPG/ MMORPGs. When he isn't writing, he wages war in his backyard with his children having make-believe battles against the orcs invading from next door. He is married and has five little orc slayers.

With his father gone to war...

...Kealin must make a decision.

Should they stay and train to defend their Elven land, like their father asked, or head out into the icy waters to try to change fate?

When he realizes how much danger their parents are in, Kealin and his siblings take to the seas in a magical vessel. The voyage doesn't go as planned. They know the prophecy. Can it really be true?

Something has happened. There is a power on board, but it isn't Elven in nature. What does it all mean and how will it change Kealin?

Not all who appear to help are friends.

Who can they trust?

You'll adore this gripping story of sword and sorcery because the characters keep you hooked until the end.

They proceeded down the curved stairwell for what seemed a longer time than was necessary. It was very dark, but after several steps, the passage straightened out. They could now see the way ahead. Their path was lit every few feet by faint red glowing stones, not much light at all, but it was just enough to see the steps.

Ahead, they could hear a whistling wind, but it was not clear where it came from. They came to an area where two green torches provided plenty of light. A doorway was there, with a veil hanging down. On the veil, a silver inlay of the four points of direction and a maelstrom. Alri put her hand out and walked first, disappearing beyond the veil. The others quickly followed.

Kealin found himself in a moonlit walkway. He looked to his left and could see the sea rippling in the distance and the dark skies of night. He looked behind him and noticed that where the veil had been was now solid stone. He pushed on it with no budge from the surface.

"Where are we?" asked Calak.

Alri walked ahead of them, and Kealin ran up beside her. The stone hallway ended abruptly at a wall and turned left. Kealin touched her shoulder and then drew his blade, moving up ahead of her.

It was a temple of some kind, with rows of pews in a square room with a high arching ceiling. Windows surrounded them, and snow and ice had built up on the outside. He moved through the center of the pews; a large doorway was at the end, and he went to it, attempting to open it. He pushed. Nothing.

Taslun stayed with Alri, who walked to another hallway around a center altar that mirrored the hallway they had come from.

With Calak's help, they both pushed on the doorway. It cracked and then creaked open with a gust of wind and snow. There was a landing just outside, and as the doors were forced open, Kealin and Calak walked outside. A ruined stairwell that led downward was broken apart halfway from a stone dock, but it was a great distance to that point. The sea tore upward at them. They were on the base of the mountain in the temple, and it was clear why few had come to visit Dimn, at least, in their normal realm.

"The veil must have been like the maelstrom, a split in the realms," said Kealin.

Kealin took hold of the doors but found they had already begun to freeze in the snow. He managed to free one, but even with his brother's help, they couldn't get the second.

Calak shook his head. "Leave it. It's not like someone will be coming up those steps anytime soon. But it is a bit draftier in here now."

They walked toward the other hallway where Alri and Taslun had gone, and found that they had progressed through a large door and were now at a second door. This one was stone with a silver runic inscription. Alri was reading it to herself.

"Did you enjoy making it the temperature of the Glacial Sea in here, little brothers?"

"It is a view to see, at least." Calak laughed.

"What does this say, Alri?"

By this time, she had knelt down and was reading the last of the inscriptions. "It was a decree, by the Saints of Dimn. Most fell in battle against some beast seeking its way into the mountain to reach the god. The last few made an inscription, remembering their struggle. It reads, as best I can translate:

To those who remain in the days that follow, know that we did what our god would have us do. To join in revelry of death against the Ice Demon of the Glacial Seas, we do recount our fall to the last patrons of Dimn. The stairwell is no more, and we have shut the doors. While they are sealed, this place is protected from the beasts. We have no food, but it is in Dimn we are strong.

I will be the last of the Saints to draw breath in these hallowed walls, the sanctuary once kept warm by the prayers of the patrons of Dimn. It is beyond this wall I will seal myself away, awaiting the end, for my brothers and sisters have all become ill. The magic protecting our doorway has been made no more. I will go beyond the wall, my last act of sacrifice to Dimn. He has betrayed us to this fate."

"It seems the Saint was stalwart and then despaired," Taslun said. "So this is the second door Dimn spoke of?"

"I assume. I will attempt to open it as before."

Alri placed her hand on the door, and it began to glow; she spoke a word to herself, and the door cracked. Stepping back, Taslun stepped in front of her with his sword out.

The room was dark. A single form could be seen against the far wall and, as torchlight from the hall would provide, it was clear the Saint was true to his runes.

Sitting upon a stone bench, a recessed room of prayer had become a grave. The robed figure still clutched a staff in its hand, and there was nothing else to be found.

"Then that is the staff," said Kealin.

Alri stepped forward; placing her hand on the staff, she pulled it from the decomposed grip of its last owner. The bones of the hand cracked as she pulled it free. At once, the staff became alive with a radiant light, and she smiled.

"It is good to have a staff again," she said. Alri unrolled the parchment Dimn had given her and murmured the words to herself.

She placed the staff over herself, and it glowed slightly before a mist fell over her head and down to her shoulders. Her face brightened to that which Kealin knew before.

The parchment she was holding turned to dust.

"Then we have done what we came to do," Kealin said.

Taslun knelt down to the corpse. He placed his hand above the skeleton. "In death, you are honored, last of the Saints of Dimn. May your stand be remembered."

"To die to protect a place is strange to me," said Calak. "To defend your people, yes, but a god and his temple?"

"We honor him regardless, Calak. To die in a stand against odds beyond yourself is a glory beyond understanding, unless your sword is next to the one who does it. Such is that of the Blades of the Urlas Woodlands."

A roar shook the room they stood in, and pebbles fell from the ceiling. Kealin looked to Taslun, and they both filed to the end of the hallway, glancing into the temple hall.

Another roar rumbled through, and a blast of white shattered the windows on one side of the hall.

"Back to the other hallway," Taslun commanded.

"That door is sealed," said Kealin.

"There is some way out," said Taslun, "and it is not out the door to the seas! Alri, your staff. I am sure of it; it will open the way back to Dimn."

They both peeked around the doorway again. It looked clear for the moment. They looked at one another and ran. A blast of ice shot through the open door, spraying the back wall of the hall and turning it to ice. Another roar followed. Kealin and Taslun had made it to the second hallway.

They peeked around as Calak and Alri did the same.

The doors swung open, and a plume of snowy dust flew in. Eyes stared in. It was the ice dragon from before.

"Vankou wishes his will upon you, elves. I thank you for my freedom, and I am happy to realize you made it through the maelstrom. But now, you will freeze."

It opened its mouth, cracking the foundations of the hall, causing the front half to shatter and fall to the sea. With a blue blast summoning around its mouth, Alri rushed forward, her staff out; she summoned a blast of wind, knocking the dragon's mouth back. Calak ran behind her for the hallway, and as the dragon recoiled and spewed its icy breath, she summoned a shield of fire that turned the breath to water. The blast had been thwarted, and as the dragon took to the sky, she joined the others in the hall.

She placed her staff at the wall, and the way began to materialize before them.

There came a strange laughing growl. Kealin looked back to the double doors leading outside. A form appeared, hunched and made of bone. It was very small, perhaps only coming to his waist in height. Following it were many others just like it, tiny skeletons, at least to that of the elves' standards. They held spears and ran for them.

The brothers ran to meet them, slashing and cracking at their bony forms, turning them to no more than piles of bones. Kealin took a glance at the now-gaping opening in the hall. Alri had opened the path. He then looked out one of the windows to the sea. It seemed the dragon had made an icy bridge from the sea to the hall, and a steady flow of the skeletal warriors were upon them.

Backing into the hallway, they slashed and parried those they faced with ease, but their numbers inundated the hallway.