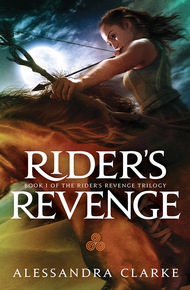 Alessandra Clarke has been losing herself in the worlds of fantasy novels since she was old enough to borrow her first book from the library. She loves the worlds of Valdemar, Darkover, and Pern, and wishes she could live a hundred lives just so she could read all the books on her to-be-read list. She is also a 2017 graduate of the Taos Toolbox writing workshop.

When K'lrsa's father is brutally murdered she sacrifices everything for the chance to avenge him, allowing herself to be taken as a slave so she can reach the man she believes is responsible.

But when she finally arrives at her destination, nothing is what she expected. Raised to be the equal of any man and a trained warrior, she finds herself in a world where she can't even look at a strange man without the risk of death.

Can she survive long enough to avenge her father? And when her chance finally comes will she still have enough of that warrior spirit left to act?

K'lrsa paced to the edge of camp and stared into the distance, looking for any sign of the Riders returning. They'd been gone a full day now.

Her stomach rumbled, but she couldn't bring herself to eat.

They should be back by now. They should've been back the day before.

She sat down in front of her tent and started to mend her oldest hunting vest, but then sprang to her feet again a moment later to once more look for the Riders.

K'lrsa clutched the moon stone around her neck. It felt almost hot. Her sense of urgency increased as she held it. "Don't you feel it, Mom? Something is wrong. I have to go find them."

Her mother frowned, her lips pursed together as she glanced to the side where M'lara watched them, her arms wrapped tight around her legs. "No, K'lrsa. You need to stay here and protect me and your sister. That was what your father ordered you to do."

K'lrsa paced in front of the tent. As a Rider she should obey his orders without question.

But something was wrong. She just knew it.

Her mother continued to pick at the seams of an old dress.

K'lrsa shook her head as she stared at the empty horizon once more. "No. I have to go. You'll be fine."

"And what of F'lia? Would you see your best friend murdered because you couldn't follow your father's orders?"

K'lrsa glanced towards F'lia's tents, picturing her bright and gentle friend trying to defend herself from attackers. She didn't want something to happen to her.

But something was wrong. She knew it.

"They should've been back by now, Mom."

Her mother shrugged, but it didn't hide the tension in her shoulders. "Maybe the raiders fled and they gave chase."

"Or maybe the raiders chased them and they're hiding somewhere right now, fighting for their lives, and I could find them and save them."

M'lara buried her face in her knees, her small shoulders shaking.

K'lrsa's mother dropped her hands into her lap. "Oh, K'lrsa, enough. You aren't the Moon Maiden reborn. You're just a young girl like I was. Good with a bow and a solid member of the tribe, but not some legendary hero. You aren't going to save anyone. Sit down and wait like the rest of us."

K'lrsa stared at her mother as tears filled her eyes.

She stared down at the ground and tried to master herself. She was a Rider and Riders didn't cry. Crying just proved her mother right.

No one else might believe it, but she knew in her heart that she could help.

Better than sitting here in camp waiting for them to finally return.

If they ever did…

She shook her head. No. She couldn't wait another moment. It might already be too late. She grabbed her gear and strode away toward Fallion.

"K'lrsa, you get back here right now," her mother called. K'lrsa kept walking.

Something was wrong. She had to find the Riders before it was too late.

She'd deal with her mother when everyone was safely back at camp.