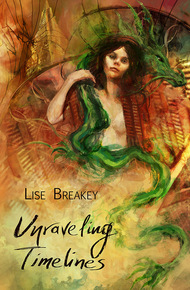 Lise started out writing fantasy role-playing game articles and books but has also written science fiction intermittently over the last 25 years. In her day job, she is an attorney, handling indigent criminal appeals and writs in the California Courts of Appeal. She also invented the traffic sign which reads "Resume Being Unprepared To Stop." She lives with her family in La Mesa, California. Her best writing occurs in various coffeehouses in La Mesa Village.

Peter Chang is an unassuming young man from San Francisco who wonders how he got the stockbroker job he is so obviously unqualified for. One night, his boss' daughter emerges from the wall in his office, pursued by killers. Smitten, Peter helps her escape — and the life he understands disappears as he is snatched from one alternate timeline to another.

Nikki Varian is a bohemian rebel whose overbearing father uses his time-traveling power to create alternate timelines and exploit them for profit. But when the old man is murdered, her quest to find his killers and preserve what is left of her family leads her to the horrifying truth: that alternate timelines can be destroyed as well as created.

When Nikki is captured by the survivors of her father's xenophobic extermination campaign, Peter must discover his own mysterious power in order to save her. Together, Nikki and Peter must find a way to make peace with her father's implacable enemies — or the timeline that they both call home will be the first of many to unravel.

Unraveling Timelines by Lise Breakey is a fresh take on "X-Men Meet Underworld"—a mythic tale of warring castes with psychic powers. Peter Chang is an unassuming young man who feels unmoored in his life. One night, his boss' daughter emerges from the wall in his office, pursued by killers. Nikki Varian is a bohemian rebel whose overbearing father creates alternate timelines and exploits them for profit. But when he's murdered, Nikki discovers that timelines can be destroyed as well as created. Peter must discover his own mysterious power, and Nikki and Peter must try to make peace with her father's implacable enemies—or the timeline they both call home will be the first of many to unravel. – Athena Andreadis

Peter clapped hands over his ears, staggered, made a convulsive movement, and went down like he'd been hit with a rock.

Nikki caught him, but couldn't keep him standing. He was limp as a wet towel. She got him down to the stones of the parapet and rolled him over. He lolled, eyes unseeing behind smudged glasses before they closed.

In a flash of eidetic memory she saw Alex with blood gushing from his neck, Edvard, bug-eyed from the buried wire—"Peter? Peter!"

She found a pulse in his throat and sagged in relief. She dragged him back from the edge, casting a fearful glance down the hill, so full of trees and hedges and shadows, and tried to rouse him with shaking and slaps. He was out cold. She waited, with his head in her lap, but minutes went by, and Lady Varian cried out again from below, and more minutes went by , and he didn't stir.

He was not going to wake up in time for his vision, if he was having one, to be any use. She would have to do something to save them herself.

Jump down to the door, she thought, to spring the ambush; and it if turned out there wasn't one, she could come back for Peter and her stepmother. That was a plan. Not a good one, but better than nothing. She stood at the wall of the parapet getting ready to fugue and searched the gardens below for any trace of X and Y—a glint of metal in the foliage, a hint of movement other than the servas or the wind stirring the branches—but there was no sign.

It was then she really looked at the hedges, tracing the maze-like paths between them near the valley floor where they crowded closer and thicker and more overgrown, unexplored and unseen…

Then she went down to Lady Varian's room. "There's something else to try."