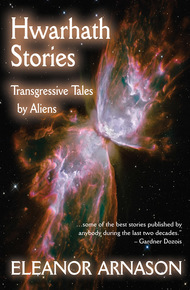 Eleanor Arnason was born in New York City in 1942. Her mother, Elizabeth Hickcox Yard, was a social worker who grew up in a missionary community in western China. Her father, Hjorvardur Harvard Arnason, was the son of Icelandic immigrants and an art historian. She grew up in New York, Chicago, London, Paris, Washington DC, Honolulu, St. Paul, and Minneapolis. She received a BA in art history from Swarthmore College and did graduate work at the University of Minnesota, before quitting to learn about life outside art museums and institutions of higher learning. She made her first professional sale in 1972 while living in the Detroit inner city. Since then she has published six novels and over fifty works of short fiction. Since 1994 she has devoted herself to short fiction.

Hwarhath Stories: Transgressive Tales by Aliens collects a dozen Hwarhath tales with commentary by their translator. As the translator notes, "Humanity has encountered only one other species able to travel among the stars. This species, who call themselves the hwarhath, or 'people,' are also the only intelligent species so far encountered. Of course, we interest and puzzle and disturb each other... The stories in this collection were written after the hwarhath learned enough about humanity to realize how similar (and different) we are. Our existence has called into question many ideas about life and morality that most hwarhath would have called certain a century ago..."

Hwarhath Stories: Transgressive Tales by Aliens by Eleanor Arnason—winner of the Tiptree, Mythopoeic Society and Spectrum awards—continues her rich, inventive tradition of speculative cultural anthropology. The Hwarhath are an alien bisexual species who engage in heterosexual sex strictly for procreation, reserving romantic passion for their own gender. Like all absolutes, this leads to all kinds of tensions and transgressions, and the mirror-imaging of standard human mores makes for fascinating comparisons and contrasts. Each of the sixteen Hwarhath tales recounted in the collection comes with the visiting Human scientist-cum-translator's commentary, wry and dry in bona-fide academic fashion. – Athena Andreadis

Humanity has encountered only one other species able to travel among the stars. This species, who call themselves the hwarhath, or "people," are also the only intelligent species so far encountered. Of course, we interest and puzzle and disturb each other.

Many human and hwarhath scientists explain this as an example of convergent evolution. Other scientists, mostly human, argue that the two species are related, although distantly. We know organic molecules appeared early in the universe's history, not on planets, which did not yet exist, but in the space around stars. As planets cooled and became solid, the molecules rained down on them, becoming the basis for life.

We know that life can travel from planet to planet, embedded in ice or as free-floating spores. Life on Earth traces its descent from Martian life forms, blown off their home planet by meteor impacts more than three billion years ago. There are still organisms on Earth, deeply buried anaerobic and thermophilic microbes that are virtually identical to what remains of Martian life.

Can microorganisms or their spores travel from star to star? It seems likely. Microscopic travelers have been found in the Oort clouds that ring many planetary systems and in interstellar space. We don't know for certain if such travelers have actually carried life from one system to another. But a number of ­scientists, mostly human, believe they have, and argue further that the microbes' genetic material was — and is — predisposed to evolve in certain ways. If the star-faring travelers ended on similar planets, these scientists say, they would evolve into similar organisms.

Opposing thinkers say it's ridiculous to suppose that the genetic material in a bacterium is preprogrammed to become (to give one example) a five-fingered animal. The fact remains that both humans and the hwarhath have four fingers and an opposing thumb.

Perhaps it's simple accident that the first species that humanity met is so similar to us. Other, stranger creatures may await us in more distant stellar systems. Maybe we have already met intelligent aliens and not recognized them.

There are hwarhath, most of them not trained in science, who argue that the similarity is due to their Goddess's sense of humor. Humanity, they argue, is a distorted reflection of the People, designed to call into question many assumptions about the nature of evolution and moral behavior. The Goddess loves to trip up, surprise, and astound. She is the great magician, pulling birds out of her sleeves, turning fish into tli.

Other hwarhath say there is more here than mere surprise and the Great Mother's love of jokes. "Surely we can learn something from a people so similar, yet different. The Goddess is full of tricks, but not (to our knowledge) malicious."

As far as can be determined, the stories in this collection were all written after the hwarhath learned enough about humanity to realize how similar (and different) we are. Our existence has called into question many ideas about life and morality that most hwarhath would have called certain a century ago. With two exceptions, the stories don't deal with humanity directly. Instead, the authors are looking at their own culture through lenses created by their knowledge of us. Reading this fiction, we can begin to learn about our neighbors in known space. We may even learn something about ourselves.

The most dramatic differences between hwarhath and human culture, the ones that bother both species, lie in the area of morality; especially as morality pertains to sex, reproduction, and violence. Early in their history, the hwarhath made a rigid division between sex for procreation, which had to be heterosexual, and sex for pleasure, which is homosexual. Humans find this division almost impossible to believe. However, the hwarhath point out, they have always found it perfectly reasonable and natural; and it eliminates accidental children. Every child is the product of an agreement between two families. Since hwarhath families vary in size between 1,000 and 100,000 members, this means a lot of people are involved in the creation and raising of each child. A child's death by neglect or abuse is a crime with several thousand perpetrators, and any family that tolerates harm to children risks its own existence. Who, ask the hwarhath, would interbreed with a family that does not care for its own?

A second benefit of hwarhath morality is that it keeps men and women apart. Traditionally, male culture is violent. The hwarhath believe this is a result of male natures and not to be condemned. One of the five traditional male virtues is violence.

Through most of their history, hwarhath men and women have had separate spheres of action. The women control the home, breeding, child-rearing, and their own lives. The men do dangerous work at the perimeter. Prior to modern times, the majority of hwarhath societies had strict rules about proper work for women and men. This has changed since the development of space travel. Most men live in space now, and the two sexes are so separate that both have to do most kinds of work, though child rearing remains female. The traditional work rules varied from one society to another, but two rules were universal: only men fought wars, and it was never permissible for a man to harm either women or children. These last two rules have not changed in modern times.

When the hwarhath began to understand humanity, they were shocked to discover that an intelligent species could produce accidental children and permit men to bring male violence into the home. They tried to deal with this disturbing information through theory and art. Most of the stories in this collection deal, in one way or another, with the morality of sex and violence.

Knowledge of humanity has led some writers to question other aspects of traditional society. Is it right to condemn heterosexuality so absolutely? Is it a good idea to place society and the family "in front" of individuals, as the hwarhath have usually done, or should individuals have some freedom? At what point does individuality become chaos? How important is love? Or loyalty? How dangerous is conservatism, a strong trait among the hwarhath, to the future of the species? Conversely, are the new ideas that come from humanity likely to destroy hwarhath culture?

All the stories in this collection were written in Eh Ahara, the traditional language of diplomacy and trade. It is no more difficult to learn than many human languages. Although highly inflected, it is surprisingly regular and logical, due to generations of work by grammarians, logicians, and ordinary people. Nonetheless, the usual problems of translation remain. No two languages have exactly comparable ideas. To give one example, the hwarhath word for piety — used by many of the home world's languages — is chulmar. This word also means having a good sense of humor. If a story says a certain person has chulmar, it may mean she is pious, or that she tells good jokes, or that she can take a joke, or all the preceding. How can this be conveyed in English? How can the translator distinguish between Gesh Hala, the hero of "The Hound of Merin," who is clearly good humored, and Eh Manhata, famous for his extreme piety, but never described as humorous or good humored?

In addition, an ordinary human reader is not going to understand many of the cultural references. Because of this, the stories cannot be translated exactly as they are written. Extra information must be added. In some cases, the information has been incorporated into the stories, a violation of the integrity of the text, perhaps; but footnotes on a story that was not originally footnoted is also a violation. In other cases, the information has been provided through a foreword or footnotes. Readers can decide for themselves which technique works best.

The collection is deliberately popular and accessible, intended for as wide a range of readers as possible. Because of this, some of the ordinary rules of scholarly translation have been ignored or modified. If we are to share the universe with other beings, we should make an effort — all of us — to understand them; and if over-careful fidelity and precision stand in the way of understanding, then they must go, at least in this book. More scholarly works will doubtless be produced.