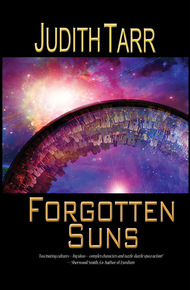 I am no one. I pass from dark into dark. I hunt a track gone cold as stone.

For five thousand Earthyears the planet called Nevermore has been abandoned. Only a handful of nomadic tribes remain, none of whom remember those who came before.

An expedition from Earth has been trying without success to solve the planet's mystery. Aisha, the daughter of the expedition's leaders, sets out to open a sealed tomb or treasury—but instead destroys it. Only one treasure survives, but it may hold the answer they have been looking for.

Captain Khalida Nasir of Military Intelligence has a quarter-million deaths on her conscience. Even in the solitude of Nevermore, her past will not let her go. The war she thought was ended still rages. Her superiors force her back into service, and dispatch her to a world that may also offer a clue to the mystery of Nevermore.

With a mysterious stranger, the sentient starship he liberates from torment and slavery, and a crew of scientists, explorers, and renegades, Aisha and Khalida set off on a journey to the end of the universe and beyond. What they find will change not only the future of Nevermore, but that of all the United Planets.

Forgotten Suns by Judith Tarr—winner of the Crawford award—takes place among the long-abandoned ruins of planet Nevermore. An expedition from Earth has been vainly trying to unlock the mysteries of the ruins, until Aisha, the daughter of the expedition's leaders, literally stumbles on a sealed tomb that contains a powerful being long in stasis. But this god-like once-king is haunted by demons, as is Captain Khalida Nasir, Aisha's aunt, who bears deep mental scars from the ongoing interplanetary wars. All three have psychic powers and must trust each other and combine their strengths to solve increasingly fraught jeopardies without succumbing to the manifold pressures of the unscrupulous Psycorps. – Athena Andreadis

Aisha had blown the top off the cliff.

It was an accident.

The parents had been excavating a circular mound on the eastern side of the old riverbed. While they argued over whether it was a palace or a temple, Shenliu wangled permission to explore across the long-dead river, where the cliff rose up sheer. He had climbed most of the way to the top, and found the opening of a cave there.

Shenliu was an artist with nuplastique. In the old days he would have fought in wars and blown up trains. Now he was a xenoarchaeologist, and he planned to blow a little hole, a tiny one, then drill down and open up whatever was below. Instruments didn't work so well on the cliff; all they could tell was that there was a larger cave inside, without any apparent way in or out.

Shenliu was set to open up the cliff before the end of the season, but then Mother and Pater found the room full of broken pottery. Shenliu had to forget about his cave and get to work cataloguing boxes of shards. He left the explosives in their locked box, away up in the cave where nobody was likely to go.

The night after he had to give up his project, Aisha had been awake long after bedtime, finishing just one more book. After she put the reader away and told the lights to go out, she heard the parents talking in their room down the hall.

Lately she'd been able to hear people through walls and even if they whispered. She had to close her eyes and listen very, very closely, but the words as often as not came through.

She might not have done it tonight, because it was late and she was sleepy, except Mother had that tone she'd had too much this year. Tight. Just a little too soft.

"I can't find any way to keep the expedition going past next season. We've put everything we have into it. Outside funding is getting leaner every Earthyear, and what sources we can scrape up are getting more and more insistent on actual, measurable, marketable results. Now Centrum's trying to gut the Department of Antiquities. We're done, Rashid. It's time we faced it."

Pater was harder to hear, but Aisha pushed herself almost to the point of headache, and his answer came clear. "We've been here twenty years. That's a good run by any standard. If we have to back off, regroup, we'll do it. The planet is a Perpetual Preserve. It will be here when we come back."

"Will we ever come back?" Mother had raised her voice. That was so rare it startled Aisha. "Once we've packed up and gone, you know what will happen. Centrum will find an excuse. The designation I fought so hard to get will evaporate. All those untouched resources, those empty continents, those seas that no one's sailed on or fished from in five thousand Earthyears—the feeding frenzy won't end till the world's stripped bare."

"We'll fight," Pater said. "The family has some power still. We'll hold off the Goths and the Vandals and even bloody Psycorps, at least for long enough to get new funding."

"If there is any," Mother said.

"Rashid," she said, flat and hard and so unlike herself that Aisha's stomach clenched into a knot. "You were raised like a prince. I wasn't. I know when doors are slamming shut. We're being pushed off this planet. There's nothing more we can do."

"There is one thing," he said. "We can find something that even the idiots in Centrum will notice."

"What? More potsherds? More scrolls and tablets in languages no one can read? Even a burial wouldn't do it by this point—if there had been one single bone left anywhere that we've ever been able to find. It would take a Rosetta Stone to even make a dent, and then we'd have to explain it to the idiots in ways they might begin to understand."

Mother didn't answer that. She'd shut herself off, turned away from him and gone inside herself where no one could reach, even Aisha.

Aisha never did sleep that night. By morning she'd made her plan. She crept out while it was still dark, sneaked into the stable and saddled her horse and led him out, to find her brother Jamal blocking the way. He had his own horse, whose empty stall she hadn't noticed in the dark, and he was looking even more like Pater than usual: scowling and trying to loom.

Since he was still half a head shorter than she was and built like a runner bean, that didn't play well. "You can't stop me," she said.

"I wouldn't waste the energy," he answered. "Whatever you're up to, promise it doesn't involve explosives."

She set her lips together.

He sighed. "Of course it does. Look, Aisha—"

"I have to do this," she said. "If there's any chance at all of saving the expedition, I've got to try."

"You know we'll be all right if we can't. Beijing Nine has been after Mother for years to take that endowed chair. We like Beijing Nine."

He didn't point out that when she was older, if she wanted those doctorates she planned to get, she'd have to live off Nevermore for years. That wasn't important, and he knew it.

He pulled himself up on Ghazal's back without another word. She mounted Jinni much more gracefully. The spotted gelding was off and cantering by the time she landed in the saddle.

Which was bad of him, but this morning she was as impatient as he was.

She'd watched Shenliu often enough that she thought she knew how to set a charge. There was treasure down below. She was so sure of it she could taste it.

She wasn't thinking about gold and jewels. She meant to find something much more important. Something that would save the expedition, and keep them from having to leave the world she'd been born on.

A Rosetta Stone, Mother had said. A key to languages that no one alive read, not even the nomads who followed the herds of giant antelope across the plains. They had no written language, no books, and precious few old stories. It was as if their whole culture had been mindwiped.

That was why Mother had named this planet of endless, empty ruins—which was designated MEP 1403 on the star maps—Nevermore. Pater held out for Lethe, but nobody else liked that. Nevermore it was.

Aisha knew that there was a key to the mystery somewhere, and she was going to find it. The cave was as good a place to start as any.

First she had to get in. It was hardly Aisha's fault that she mistook the amounts, and thought a unit of nuplastique was a whole stick. Afterwards, when the top of the cliff had fallen in and she and Jamal had barely got out before the earth swallowed them, she found out that a unit was a hundredth of a stick. Her little hole, just big enough to let a narrow-bodied girlchild through, had turned into a terribly big hole.

She was too crushed even to cry. There was a cave, but there was nothing in it. There had been a little gold and a jewel or two—mostly vaporized—but no real treasure at all. Not even a bone, or a word carved in a fragment of stone. Certainly no key to the mystery that they were all trying to solve. That they had to solve this year, or never do it at all.