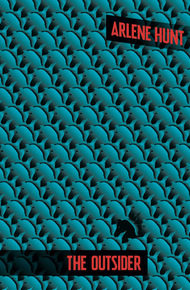 Arlene Hunt is the author of eight crime fiction novels, five of which feature the popular QuicK Investigation duo, John Quigley and Sarah Kenny. She is also the co-owner of Portnoy Publishing and regularly reviews novels for RTE's arts show, Arena.

Her novels have been translated into three languages. The Chosen, a stand alone – set in the US – was voted as TV3's Book of the Month for November 2011. An earlier novel, Undertow(2008), was short listed for best crime novel at The Irish Book Awards. Arlene has also contributed to many anthologies, including, Down These Green Streets, Requiems for the Departed, Console and Books to Die for. Her current novel, The Outsider (2013), is available in all good book shops now. Arlene is working on a new series, the first novel of which is near completion. When not writing, Arlene spends most of her free time walking a large hairy dog called Archer.

The Outsider by Arlene Hunt

From the time she was born everybody knew Emma Byrne was different. Shy and reclusive, her world revolved around animals and she shunned social conventions as much as her mother would allow. By fifteen she had successfully managed to turn her understanding of animals into a rewarding job at a local stables and was, in her own way, flourishing.

So why then did someone shoot at Emma Byrne in Crilly Woods? Who would want to harm her?

Emma's twin brother Anthony vows to get to the bottom of the case, and in course of his investigations made a terrible error: one that will change all their lives forever.

I first heard about Arlene’s work about three years ago from a writer friend of mine. I had never seen him so insistent that I read a book before. It was one of Arlene’s first, and I so very happy that my friend introduced me to her skilful, dark, wonderfully grubby worlds. – Paul O'Brien

The body lay at the bottom of a water-filled ditch. Larry Green wiped the rain from his face with his hand and took a step closer to get a better look. His breath formed a white plume in the bitterly cold air. It was December 27th, the day after St Stephen's Day.

Eddie Yates, a mountain of a man clad in a green waxed jacket and green wellingtons, shuffled up beside him. Rain spilled from the brim of his cap.

‘Ara Jaysus, sure it's no wonder we couldn't find him.'

‘Aye, he must have been lying under the snow.'

The two men stood shoulder to shoulder. The bulk of the body was submerged under the brackish water, but tufts of hair breached the surface, as did part of a shoulder and a section of a white curled finger.

Eddie's cocker spaniel Lulu – named after the singer – saw what they were looking at, raised her hackles and growled.

‘Stick her on the lead there,' Larry said. ‘We don't want her disturbing things.'

Eddie pulled out a length of twine from one of his many pockets, made a noose, and looped it over the dog's neck. Heyanked it a few times until, eventually, she sat down. ‘Is it definitely him?'

Larry glanced at Eddie to see if he was being serious or not. How many bodies did he expect to find in the hills above Killbragh? But Eddie's broad face displayed no hint of sarcasm or guile.

‘Sure who else would it be?'

Eddie shrugged, turned his head and spat. ‘Should we pull him out do you think?'

‘Aye,' Larry reached into his pockets for his cigarettes, ‘you go on. I'll stay here.'

Eddie grunted and left, dragging a reluctant Lulu behind him. Larry lit a cigarette and stood huddled against the rocks on the opposite side of the track while he waited. He was on his third cigarette by the time he heard voices.

Eddie came into view first, followed by a garda, and behind him, Arthur Donovan, looking grim-faced beneath his flat cap. Larry stamped on his cigarette butt and swore under his breath. Although he had little time for Donovan, he wouldn't have wished this moment on his worst enemy.

‘Is it him?' Donovan called, his voice taut stretched thin over the beating rain. He overtook the garda, who was slipping and sliding in the mud in his regulation shoes.

Donovan paid the garda no heed. When he reached the track where Larry stood, he looked down into the ditch. His hard, maimed face gave nothing away, but Larry wasn't fooled. He'd lost a child once too, a son, stillborn. That had hurt – it still did from time to time – he couldn't even begin to guess what Donovan was feeling.

‘Mr Donovan!' The garda was upon them. He glanced down and then quickly turned his face away again. The garda's uniform was destroyed by mud and he was breathing hard. A bloody townie, Larry thought uncharitably. He's not used to tramping around the wilds. ‘Mr Donovan, you can't...you have to leave him as he is.'

‘We can't move him until the pathologist takes a look at him. Please, I've radioed for the Inspector. He'll be here in a minute.'

He was, Larry realised, looking at him, appealing for some sort of back up. Larry looked away.

‘I'll not leave him down there,' Donovan said through clenched teeth, ‘not like that.'

Donovan tossed his coat onto the briars. The garda looked at him, helpless, in his oversized coat and sodden peaked cap. He was a kid, Larry realised, like all of them seemed to be these days. Jug-eared, freckled, not much older than the boy lying in the water below them.

A savage gust of wind drove the rain horizontally. Donovan rolled up the sleeves of his shirt and began to descend the bank. The garda made one last effort and tried to grab a hold of his arm, but Donovan shook him off easily.

‘We can't disturb the scene!'

‘Here, make yourself useful and take a hold of her.'

Lulu was none too happy with this arrangement. She barked and whined after Eddie as he scrambled down the bank behind Donovan and landed in the water with an enormous splash. Donovan plunged his arms beneath the surface and felt around.He leaned back, grunting, claiming what was his from the muck and the filth.

Larry heard the garda mutter under his breath. Eddie grappled with the legs, lost his footing, slipped and went down, soaking himself in the process. Taking this as his cue, Larry removed his own coat and went to help.

Between them they managed to haul Gully Donovan's body out of the water. They carried him up the bank and onto the track.

Larry stood up and stared at the boy's claggy eyes. He located his hip flask, opened it and took a slug, felt his guts roil as he passed it to Eddie, who took more than a mouthful.

Gully's face was bloated and mottled, marbled almost. Donovan's shoulders shook as he slid his hands under the boy's shoulders and lifted him onto his lap. The head rolled back, revealing a wound that made Larry gasp. The garda, still holding Lulu, staggered back and managed to make it to the rocks before he vomited.

Days in the water, Larry thought, taking another slug, feeling the liquid burn hot and settle his bile. Sure how could it look any different?

Donovan cradled his son's head in his lap, smoothing back strands of black hair from Gully's forehead. Without being asked, Eddie fetched his coat from the briars and draped it over Donovan's shoulders.

Larry lowered his head, embarrassed to be witness to this grief. His hands dangled uselessly by his side and no words of comfort came to him, no soothing gesture. Donovan continued to cradle his son's remains. After a while, Lulu began to whine and then to bark; she kept it up until Eddie yanked the lead from the garda's hand and gave her a quick kick in the ribs. With that, she fell silent.