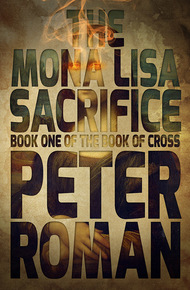 Peter Darbyshire (aka Peter Roman)'s writing has appeared in publications across North America. His novel Please won the KM Hunter Award for Best Emerging Artist and Canada's ReLit Award for Best Novel, and was featured on CTV. His novel The Warhol Gang received rave reviews across Canada and generally disturbed people. He lives in a safehouse outside Vancouver.

The Mona Lisa Sacrifice: Book 1 of the Book of Cross by Peter Roman

For thousands of years, Cross has wandered the earth, a mortal soul trapped in the undying body left behind by Christ. He's been a thief, a con man, a soldier and a drunkard. He's fought as a slave in the Colosseum and as a knight at King Arthur's side. But now he must play the part of reluctant hero, as an angel comes to him for help finding the Mona Lisa—the real Mona Lisa that inspired the painting. Cross's quest takes him into a secret world within our own, populated by characters just as strange and wondrous as he is: gorgons and dead gods hidden away in museums; faeries that live in countryside pubs, trapping and enslaving unwary travellers; and super-rich collectors who trade magical artifacts among themselves. He's haunted by memories of Penelope, the only woman he truly loved, and he wants to avenge her death at the hands of his ancient enemy, Judas, a forgotten god from an ancient time. The angel promises to deliver Judas to Cross, but nothing is ever what it seems when Judas is involved, and when a group of renegade angels looking for a new holy war show up, things truly go to hell.

When I pitch this book to potential readers at conventions, I say one of two things: 1. "Every mythology ever walks into a bar." Or 2. "A mortal soul trapped in the undying body of Christ sucks the grace out of angels and solves crime." Usually they're sold before I finish talking. I love really interesting series characters and Peter Roman's anti-hero Cross is a great one. The first book in the "Book of Cross" trilogy, this is sure to fulfill your gonzo sense of wonder. Like if Quentin Tarantino made Howl's Moving Castle. – Sandra Kasturi

In the beginning was an angel, a church and a knife.

I hunted down the angel, Remiel, in Barcelona. He was working as a living statue, one of those street performers whose job it is to separate tourists from their money before someone else does. His office was a wooden pedestal on La Rambla, the pedestrian boulevard by the harbour that every visitor has to hit before they start exploring the real city. He was tucked away among the kiosks that sold everything from postcards and magazines to live birds. A silver robot stood on a box to the left of him, while a clockwork man dressed in gears, wheels and pistons was on his right. Remiel was made up like a demon with golden skin, bat wings and two tails, holding a leather tome bound with three locks. He looked like just another out-of-work circus performer vying for tips. Apparently even angels have to make a living these days.

If you've been to Barcelona, or any other city with a tourist district, you know the scene: People with cameras and sunburns wandering around, the statues, jugglers and magicians competing with each other to earn a few of the local coins, while pickpockets go for the money the easy way.

You wouldn't notice me. I'd be just another passing face, another man from somewhere else with a hat, sunglasses and backpack. I'm a pretty convincing nobody, thanks to centuries of experience.

But Remiel turned his head and scanned the crowd as soon as I caught sight of him. Angels have a sense for each other. He was looking for me. Trying to find me like I'd found him.

The problem for him was he was looking for the wrong thing. I'm not one of them. I can never be one of them. I'll let you worry about whether that's a curse or a gift.

I ducked into a kiosk and pretended to look over a selection of fridge magnets depicting the city's famous Gaudí church—La Sagrada Familia to the purists—while keeping an eye on Remiel in the mirror on the sunglasses stand.

He fluttered his wings and lashed his tails, which prompted people in the crowd to applaud and toss money onto the mat at his feet. But he wasn't acting for them. I knew his demon form wasn't a disguise. He wasn't wearing makeup and using props like all the other performers. This wasn't even a sleight he was using to hide his real form. This was actually one of Remiel's incarnations. And he was genuinely agitated at sensing my presence but not being able to find me. I would have been amused by the situation if I weren't so damned desperate for grace.

He hopped down off the box and gathered up his mat and money in one smooth motion. He looked around some more as he put them in a shoulder bag he draped off one of those wings. Then he made his way through the crowd and into a side alley. I followed him, careful to keep clear of the people filming his exit. You never know when some enterprising law enforcement officer will think it's a good idea to look at people's cameras after a crime and then track you down at the bar or airport lounge where you happen to be enjoying a few drinks. And then you have to come up with answers to all those questions that are so difficult to answer.

After all, it was a photo that led me to Barcelona. Printed on a piece of paper and tucked inside an envelope with no return address, delivered to a hotel in Prague where I'd been staying to ride out a heroin withdrawal. I'd been trying to cultivate an addiction so I could forget about various things I no longer wanted to remember, but my body had rejected the drug. It had worked for only a few weeks, hardly enough time to forget who I was, before my body started cleaning it out of my system. Healing me like it always did. Just doing its preprogrammed job. You'll have to trust me when I say I can't recommend going through withdrawal while you're still high.