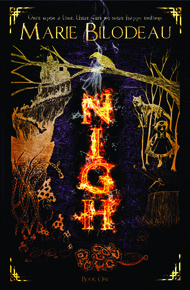 Marie Bilodeau is an Ottawa-based author and storyteller, with eight published books to her name. Her speculative fiction has won several awards and has been translated into French (Les Éditions Alire) and Chinese (SF World). Her short stories have also appeared in various anthologies. Marie is also a storyteller and has told stories across Canada in theatres, tea shops, at festivals and under disco balls. She's won story slams with personal stories, has participated in epic tellings at the National Arts Centre, and has adapted classical material.

Marie is co-host of the Archivos Podcast Network with Dave Robison, co-chair of Ottawa's speculative fiction literary convention CAN-CON with Derek Künsken, co-chair of Ottawa ChiSeries with Nicole Lavigne and Matt Moore, and is a casual blogger at Black Gate Magazine.

Nigh by Marie Bilodeau

A disappearing watch. A thief in the night. Whispers around every corner... Then a mist rolls into town and refuses to dissipate.

Alva Viola Taverner has lived in her small town all of her life, working as a car tech while saving for her little sister to go to university. But everything is about to change as the veil between our world and the world of the faeries weakens and falls.

Suddenly, even the smallest bump in the night can prove the deadliest.

Marie's one of those dreadful people who holds down a day job, writes seventeen novels before breakfast, has a brisk oral storytelling career, sits on various committees, and manages to be a nice person. And a good writer! (It's so annoying.) I just had to read the tagline on the book and I was sold: "Once upon a time, there were no more happy endings . . ." – Sandra Kasturi

The small gear popped out and tumbled to the floor, the desk lamp lighting its fall before it vanished into the darkness below the workbench.

"Damn it!" Alva flicked back a sweat-dipped strand of rust-coloured hair that escaped her braid, and crouched to find the escapee. She felt under the workbench with oil stained fingers, but calluses blocked any sensation resembling a small gear.

"Argh, under-the-workbench gross." She stood back up, disgusted, wiping her hand on the leg of her blue coveralls.

"What's that? You're gonna clean under the workbench?" Gruff's voice boomed behind her.

"Oh ya," she turned, eyebrow raised. "Next thing you'll tell me, you expect me to mop the floors, too!"

She grinned. "It IS clean. Cleanest in town! As long as you don't look under the workbenches." She sat on the stool, the innards of the watch laid bare before her. Intricate little swirls hugged gears and tumbled into small notches, so many that Alva didn't know where to start. Each tiny gear did so much, an intricate system of metal and planning that turned time itself.

She sighed and gently closed the watch. Gruff's dirty overalls blocked her peripheral vision. "I thought you were gonna save your money to get that fixed, Al." His voice was uncharacteristically soft.

"I need to save money for Pete's school. Besides, this isn't gram's watch." She showed him the scratched, tarnished cover. She'd kept her great gram's watch in perfect condition, just like her dad had before her.

She shrugged. "I didn't want to practice on the original, but I thought that if I could practice on another watch, then maybe… I don't know. I don't think my hands are young or nimble enough anymore."

Gruff guffawed, throwing his head back, his rebellious white hair swaying with his amusement. "If your hands can't handle the small stuff, we're all in trouble!" He held up his large hand, the right thumb tweaked to the side – it had never healed right after a car had slipped off its jack and snapped it.

He sobered again. "You should keep trying. Maybe you'll repair finer things than cars someday!" He turned back to finish his inventory.

"I like repairing cars!" She screamed after him, but he just waved back without answering.

The garage had already been closed for a few hours. Neither Alva nor Gruff were in any rush to get back home, him to an empty nest, her to an empty home. Pete would be back tomorrow, at least. She hoped the university visit had gone well. Her little sister wasn't one for disclosing information on the go. Probably too lost in her own thoughts to think of texting Al.

The main shop lights were off – drivers seemed drawn like moths to a flame to a lit garage. Alva relied on a small desk lamp.

"All right," she mumbled. "My dad built trains, I fix cars, and now let's go smaller and fix a watch. Let's make this happen!"

She grabbed her flashlight and crouched again. She imagined the grit under the bench would consist mostly of dirt and maybe some food. Only the small metal gear should reflect the light. Well, she hoped there weren't too many sharp and pointy things under there, anyway.

The light beamed and blinded her for a second. She placed her cheek against the cold concrete floor, following the beam. Most of it looked like small rocks, probably all the crap the city threw on the roads during ice season.

A piece reflected the light. "Gotcha," she said, reaching in to sweep forward everything in that vicinity. She reached as far as she could, practically wedging her shoulder under the bench. She extended her fingers as far as possible, but just as she lowered her hand, something sharp pricked her.

"Son of a…" she jerked back, knocking into the bench and throwing herself back. A hammer landed near her head.

"You okay?" Gruff called from the parts room.

"Ya, I'm fine," she answered absent-mindedly as she stared at the blood bubbling on her finger. She grabbed her old stained rag and wrapped it around the wound, holding it tightly to stop the bleeding. Once the throbbing had subsided, she removed the rag to have a closer look.

On the side of her finger, a perfect little set of holes lined up in two connected semi-circles. Just like a little jaw.

"Gruff! We've got rats in here!" Gruff stormed out of the parts room, light spilling in behind him, forming a perfect halo around his body. She would have laughed if she wasn't busy getting off the floor.

"Where!" He grabbed the wrench from his belt and slapped it on his left palm.

Alva nodded toward the bench. Faster than she thought the six-foot-some, two-hundred-and-eighty-at-least sixty-something-year-old mechanic could move, he was on his knees. He grabbed her flashlight and redirected it toward the offender, moving it around under the bench before standing back up with a grunt. "Damn bugger's gone."

His eyes lowered to where she still clutched the rag on her finger, the blood barely distinguishable from the oil stains. He mumbled and moved, much more slowly, to one of the workstations, switching on another lamp and pulling out their first aid kit.

"Well, this will do," he said, grabbing a bandage and a small bottle of hydrogen peroxide. Alva knew the drill pretty well. She had apprenticed under Gruff more than seven years ago, since a high school placement. He'd been bandaging her wounds ever since.

Washing her hands carefully, she then dried them gingerly on a clean towel, tossed it in the laundry basket and turned, wounded hand towards Gruff.

Blood trickled lazily from the wound. Gruff smiled. "Been a while since we've done this. Not since you got Big Bertha, anyway." Alva grinned and looked toward her tool belt, slung on a peg on the wall. Her modified wrench, almost two feet longer than a regular one, hung from it.

She hissed when he poured the hydrogen peroxide on the wound, the blood now covered in bubbling white foam. He ripped open a small alcohol covered swatch and wrapped it around the wound before Alva could complain.

He grinned. "Can never be too careful."

She glared at him as he finished up, pulling the swab off to examine the wound. His eyebrow shot up. "I ain't never seen a bite like this. You said a rat did it?"

He bandaged her finger and shook his head. "Well, rats ain't good for business, and neither are any other biting critters. We'll have to call the exterminators in for the weekend, just in case. Can't afford to close the shop for too long – don't wanna scare folk back to their swindling dealerships. Let's call it a night, Al. You close up here."

Alva knew better than to argue. Gruff was a good man, but he expected his employees, even his favourite one, to fall in line. He shambled off to the back, banging the cabinets closed and locking them. Alva turned back to her bench. Might as well put the watch away. It wasn't really worth much, with a broken face and rusted cover, which was why she'd been able to afford it to practice on. But it was priceless as a learning tool.

Something caught her eye, a dull silver glow on the ground. She leaned down and saw, near a drop of her blood, the tiny gear, in perfect view, as though it had just rolled itself out from under the bench and now waited for her.