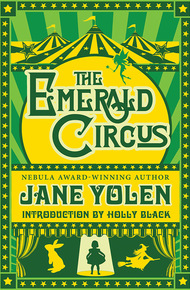 Jane Yolen has been called the Hans Christian Andersen of America and the Aesop of the twentieth century. She is the author of over three hundred and sixty five books, including children's fiction, poetry, short stories, graphic novels, nonfiction, fantasy, and science fiction. Her publications include Owl Moon, The Devil's Arithmetic, Briar Rose, Sister Emily's Starship and Sister Light, Sister Dark. Among her many honors are the Caldecott and Christopher Medals, multiple Nebula, World Fantasy, Mythopoeic, Golden Kite, and Jewish Book awards; as well as the World Fantasy Association's Lifetime Achievement Award, and the Science Fiction Poetry Grand Master Award. Yolen is also a teacher of writing and a book reviewer. She lives in Western Massachusetts and St. Andrew, Scotland.

The Emerald Circus by Jane Yolen

Where is Wendy? Leading a labor strike against the Lost Boys, of course.

A Scottish academic unearths ancient evil in a fishing village. Edgar Allan Poe's young bride is beguiled by a most unusual bird. Dorothy, lifted from Kansas, returns as a gymnastic sophisticate. Emily Dickinson dwells in possibility and sails away in a starship made of light. Alice's wicked nemesis has jaws and claws but really needs a sense of humor.

In Jane Yolen's first full collection in more than ten years discover new and uncollected tales of beloved characters, literary legends, and much more. Enter the Emerald Circus and be astonished by the transformations within.

Ah, Jane Yolen. What is there to say? A writer whose very name implies stepping into a magical house with walls built of books, and mirrors that look into other worlds . . . and maybe attached to chicken legs. Another dream come true for me to offer her book here, since I've loved her work so long. (I met her in Boston this past February and managed not to disgrace myself. I think.) Yolen's beautifully written stories will make you feel All the Things. She really is both Sister Light and Sister Dark. – Sandra Kasturi

"It isn't fair!" Darla complained to her mom for the third time during their bedtime reading. She meant it wasn't fair that Wendy only did the housework in Neverland and that Peter Pan and the boys got to fight Captain Hook.

"Well, I can't change it," Mom said in her even, lawyer voice. "That's just the way it is in the book. Your argument is with Mr. Barrie, the author, and he's long dead. Should I go on?"

"Yes. No. I don't know," Darla said, coming down on both sides of the question, as she often did.

Mom shrugged and closed the book, and that was the end of the night's reading.

Darla watched impassively as her mom got up and left the room, snapping off the bedside lamp as she went. When she closed the door there was just a rim of light from the hall showing around three sides of the door, making it look like something out of a science fiction movie. Darla pulled the covers up over her nose. Her breath made the space feel like a little oven.

"Not fair at all," Darla said to the dark, and she didn't just mean the book. She wasn't the least bit sleepy.

But the house made its comfortable night-settling noises around her: the breathy whispers of the hot air through the vents, the ticking of the grandfather clock in the hall, the sound of the maple branch scritch-scratching against the clapboard siding. They were a familiar lullaby, comforting and soothing. Darla didn't mean to go to sleep, but she did.

Either that or she stepped out of her bed and walked through the closed door into Neverland.

It didn't feel at all like a dream to Darla. The details were too exact. And she could smell things. She'd never smelled anything in a dream before. So Darla had no reason to believe that what happened to her next was anything but real.

One minute she had gotten up out of bed, heading for the bathroom, and the very next she was sliding down the trunk of a very large, smooth tree. The trunk was unlike any of the maples in her yard, being a kind of yellowish color. It felt almost slippery under her hands and smelled like bananas gone slightly bad. Her nightgown made a sound like whooosh as she slid along.

When she landed on the ground, she tripped over a large root and stubbed her toe.

"Shhh!" cautioned someone near her.

She looked up and saw two boys in matching ragged cutoffs and T-shirts staring at her. "Shhh! yourselves," she said, wondering at the same time who they were.

But it hadn't been those boys who spoke. A third boy, behind her, tapped her on the shoulder and whispered, "If you aren't quiet, He will find us."

She turned, ready to ask who He was. But the boy, dressed in green tights and a green shirt and a rather silly green hat, and smelling like fresh lavender, held a finger up to his lips. They were perfect lips, like a movie star's. Darla knew him at once.

He swept the hat off and gave her a deep bow. "Wendy," he countered.

She and her mom had read that part in the book already, where Peter got kiss and thimble mixed up, and she guessed what it was he really meant, but she wasn't about to kiss him. She was much too young to be kissing boys. Especially boys she'd just met. And he had to be more a man than a boy, anyway, no matter how young he looked. The copy of Peter Pan she and her mother had been reading had belonged to her grandmother originally. Besides, Darla wasn't sure she liked Peter. Of course, she wasn't sure she didn't like him. It was a bit confusing. Darla hated things being confusing, like her parents' divorce and her dad's new young wife and their twins who were—and who weren't exactly—her brothers.

"I don't have a thimble," she said, pretending not to understand.

"I have," he said, smiling with persuasive boyish charm. "Can I give it to you?"

But she looked down at her feet in order not to answer, which was how she mostly responded to her dad these days, and that was that. At least for the moment. She didn't want to think any further ahead, and neither, it seemed, did Peter.

He shrugged and took her hand, dragging her down a path that smelled of moldy old leaves. Darla was too surprised to protest. And besides, Peter was lots stronger than she was. The two boys followed. When they got to a large dark brown tree whose odor reminded Darla of her grandmother's wardrobe, musty and ancient, Peter stopped. He let go of her hand and jumped up on one of the twisted roots that were looped over and around one another like woody snakes. Darla was suddenly reminded of her school principal when he towered above the students at assembly. He was a tall man but the dais he stood on made him seem even taller. When you sat in the front row, you could look up his nose. She could look up Peter's nose now. Like her principal, he didn't look so grand that way. Or so threatening.

"Here's where we live," Peter said, his hand in a large sweeping motion. Throwing his head back, he crowed like a rooster; he no longer seemed afraid of making noise. Then he said, "You'll like it."

"Maybe I will. Maybe I won't," Darla answered, talking to her feet again.

Peter's perfect mouth made a small pout as if that weren't the response he'd been expecting. Then he jumped down into a dark space between the roots. The other boys followed him. Not to be left behind, in case that rooster crow really had called something awful to them, Darla went after the boys into the dark place. She found what they had actually gone through was a door that was still slightly ajar.

The door opened onto a long, even darker passage that wound into the very center of the tree; the passage smelled damp, like bathing suits left still wet in a closet. Peter and the boys seemed to know the way without any need of light. But Darla was constantly afraid of stumbling and she was glad when someone reached out and held her hand.

Then one last turn and there was suddenly plenty of light from hundreds of little candles set in holders that were screwed right into the living heart of the wood. By the candlelight she saw it was Peter who had hold of her hand.

"Welcome to Neverland," Peter said, as if this were supposed to be a big surprise.

Darla took her hand away from his. "It's smaller than I thought it would be," she said. This time she looked right at him.

Peter's perfect mouth turned down again. "It's big enough for us," he said. Then as if a sudden thought had struck him, he smiled. "But too small for Him." He put his back to Darla and shouted, "Let's have a party. We've got us a new Wendy."