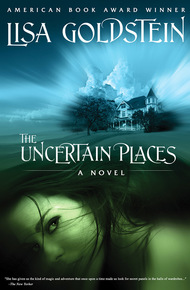 Lisa Goldstein has published nine novels and two short-story collections, including Dark Cities Underground, The Alchemist's Door, and Travellers in Magic. Her novel, The Red Magician, won the National Book Award, and she has been a finalist for the Hugo, Nebula, and World Fantasy awards. She has published dozens of short stories in such magazines as Interzone and Asimov's Science Fiction, and in anthologies, including The Norton Book of Science Fiction and The Year's Best Fantasy. Goldstein has published two fantasy novels under the name Isabel Glass and is a founding member of the women's speculative fiction co-operative the Brazen Hussies.

The Uncertain Places by Lisa Goldstein

In this long-awaited new novel from National Book Award winner Lisa Goldstein, an ages-old family secret breaches the boundaries between reality and magic, revealing the places between them.

When Berkeley student Will Taylor is introduced by his best friend, Ben, to the mysterious Feierabend sisters, Will quickly falls for enigmatic Livvy, a chemistry major and accomplished chef. But Livvy's family—vivacious actress Maddie, family historian Rose, and their mother, absent-minded Sylvia—are behaving strangely. The Feierabend women believe that luck is their handmaiden, and so it is, almost as though they are living in a fairy tale.

But the price for such gifts is extremely high. Will and Ben will unravel the riddle of a supernatural bargain, hoping to save Livvy from what appears to be an inescapable fate.

I've long been a fan of Lisa Goldstein's work, so when I was offered this book for the story bundle, I jumped at it. It has everything I like: magic, strange families, secrets, the cost of getting what you wish far . . . perfection. The book won the Mythopoeic Award, and of course Lisa has been nominated for or won every other award out there like the National Book Award, Hugo, Nebula, World Fantasy, etc, etc! – Sandra Kasturi

It was Ben Avery who introduced me to Livvy, Livvy and her haunted family. This was in 1971, when Ben and I were sophomores in college. A lifetime ago, another world, but it seems like I can still remember all of it, every motion, every color, every note of music. For one thing, it was the year that I fell in love. But for another, I don't think that anyone who experienced what I did that year could possibly forget it.

Ben had gone to Berkeley early in September, before classes started, to find an apartment for us. He'd seen Livvy's sister Maddie in a play and they'd started dating, and when I got to Berkeley he couldn't talk about anything else. Now we were going to visit her family up in Napa Valley, in the wine country, for a couple of days.

Back then Ben drove a humpbacked 1966 Volvo, a car that seemed ancient even though it was only five years old. It smelled of mold and rust and oil, and to this day, whenever I find myself in a car like that, I feel young and ready for anything, any wild scheme that Ben or I would propose. The car went through a constant cycle of electrical problems—either the generator didn't work, or the regulator, or the battery—and on this trip, as on so many others, the battery warning light flickered on and off, a dull red like the baleful eye of Mordor.

We got on the freeway and headed out of Berkeley, then passed through the neighboring suburbs. As we crossed the Carquinez Bridge Ben started telling me about the last time he'd taken the car in, and the Swedish mechanic who told him the problem was with the "yenerator." He did a goofy imitation of the mechanic, who I was sure was nothing like Ben portrayed him, but I barely paid attention. I was thinking about my upcoming classes, and about this sister of Maddie's he wanted me to meet.

"Tell me again why I'm coming with you," I said, interrupting him in the middle of the story.

"You'll like them," Ben said. "They're fun. Come on, Will, have I ever disappointed you?"

"Terrified? When were you ever terrified?"

"That time you took your mom's car out for a drive—"

"Every kid does that—"

"And you haven't gotten much better since then. Slow down. Ah, God, you're not going to try to pass that car, are you?"

The Volvo rattled over into the oncoming lane for a terrifying moment, and then Ben swore and moved back. "Where did all these cars come from all of a sudden?" he said. "It's like they grow them around here or something, along with the grapes."

"Give me a brake," he said, not missing a beat.

"Have I ever steered you wrong?"

"Yes. Yes, you have," I said, returning to my first theme. "My very first day at your house, when you gave me that chili pepper and told me it was a yellow strawberry—"

"They're fun, I told you," he said. He could usually keep up with me like this; it came of knowing each other since kindergarten. "You'll like them. And Maddie has a sister—"

"Well, I would say that, wouldn't I? Maddie's beautiful, and talented, and creative, and Livvy's..."

"No. No, they're different, that's all. Livvy's a chemistry major."

"Chemistry? What have you gotten me into here? We'll talk about the chromium molecule or something. Is chromium a molecule? I don't even know. Stick close to me, Ben."

The sun was setting, throwing long shadows across the road. We'd reached the farmlands by this time, and I could see cows grazing in the fields on either side of us, and long rows of grapevines.

We left the freeway and started up a twisting mountain road. Trees stood along either side, just starting to turn autumn red. A truck carrying a load of grapes crawled in front of us, then finally turned down a driveway and was hidden by the trees.

"Look, you'll like it," Ben said. "It's this huge farmhouse, that they've added to every generation—you get lost just looking for the bathroom. And acres of vineyards, and their own wine label...Livvy plans the dinner around the wine. Last time she made—"

"She cooks in the kitchen, right, not over her Bunsen burners? Adding chromium to the meatloaf? Because I think I have a chromium allergy or something..."

He twisted the wheel hard and we headed down an unpaved road. The road had a brief argument with the car, shaking it back and forth; then finally they seemed to resolve their differences and we continued on. A few minutes later he parked, and I looked out.

The house we'd come to looked as if Hansel and Gretel's witch had taken a correspondence course in architecture. The front was the Craftsman style so common in California, with deep eaves, a wide porch, a gabled roof, a couple of stone chimneys. Behind that, though, was another house, attached halfway along its front to the first; this one was Victorian, with curlicues and gewgaws and a round, pointed turret with a weathervane on top. Stepped back behind that was yet another front, timbered and plastered like a Tudor cottage. Balconies stuck out at weird angles, and stairs went up and down connecting them, and small windows peered out wherever there was room for them. Somewhere in the midst of all of this a cathedral tower lifted high above the other buildings, looking as bewildered and out of place as a man who had lost his glasses.

The front door opened and two dogs ran out, barking. Then a girl who looked about thirteen came out onto the porch and hurried after them.

I turned to Ben angrily, wondering if this was one of his jokes—though it seemed a lot more mean-spirited than they usually were.

"Oh no," he said. "No no no. That's Rose, the third sister. The rest of them should be around here somewhere."