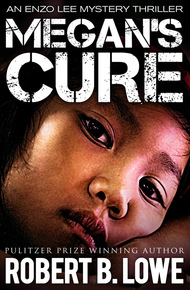 Robert B. Lowe is a Pulitzer-Prize winning author whose fiction is based in San Francisco, his adopted home.

His past experiences – a 12-year career in investigative journalism and a Harvard Law School degree – enable him to write gripping mystery thrillers in both the legal and journalistic fields. Lowe draws his inspiration from John Grisham, Dick Francis and Lee Child and adds his own San Francisco twist. Readers will enjoy his references to the city’s landmarks such as Chinatown, North Beach and Pacific Heights and the Bay area’s foodie culture.

Megan's Cure by Robert B. Lowe

When 10-year-old Megan Kim disappears from her school on the Alabama Gulf Coast, it has all the signs of a child abduction. However, a more complicated story soon emerges. The action follows Megan and a brilliant but troubled scientist across the South on a desperate mission to evade their pursuers. Big Pharma is intent on burying Megan and the secret she carries.

Meanwhile, reporter Enzo Lee is trying to save his gravely ill grandmother and embarks on a search for a cure. That quest leads him to the fugitive pair. Together, they must confront the wrath of the entire drug industry armed with the deadly tools of organized crime.

On small rural roads, in historic Savannah and on the cold Pacific waters beyond San Francisco Bay the unlikely allies fight to stay alive and bring to light the scientific breakthroughs that will cost the drug companies billions in lost profits.

Robert B. Lowe is a writer who works at several different levels. With his novel in the is bundle, Megan’s Cure, he has managed to tie many compelling strands together. There’s crime, intrigue and a fantastic thriller at play — while asking a much bigger question by the end. – Paul O'Brien

LUCY QUAN FINISHED her peanut butter and honey sandwich, licked the last of the sticky residue from her fingers and giggled across the picnic table at her best friend, Megan Kim.

When she swung her legs over the bench, stood up and gave a little wave to Megan – still eating fried rice out of the wide-mouthed thermos that came inside her battered Dora the Explorer lunchbox – Lucy didn't need to explain where she was going. After two years sharing classes, lunches and walks to school and back home again, both girls knew Lucy was making her usual quick trip to the girl's bathroom. A careful observer would have been able to set his watch by the event – 14 minutes before the bell signaling the end of lunch.

Lucy walked down the pathway between the tall chain-link fence and the 30-year-old, two-story school with beige, brick walls and oversized windows. Just before she reached the corner of the building, Lucy turned back and glanced at her friend. She saw Megan looking away from her in the opposite direction, toward the street that ran along the side of Langford Brice Elementary School. Lucy saw a white-haired man. He stood on the sidewalk with his hands resting on the waist-high fence. Megan seemed to be talking to him across the 20 or 30 yards that separated the two. It was odd enough to cause Lucy to stop, just for a second, before turning the corner with a flip of her ponytail and continuing on her mission.

She rushed her trip back, disturbed by the change in routine – the strange man – even as she tried to assure herself with innocent scenarios. Maybe he was just someone asking for the best way into the principal's office. Or wondering about the name of the school. Lucy's heart beat faster than normal when she turned the corner. At the empty table she saw Megan's lunchbox packed and sitting with the handle up. Dora's smiling face on the side seemed to be asking her, "Why did you leave?"

Lucy quickly surveyed the other half dozen tables and the yard of the school that held them. She saw that Megan wasn't among the 50 or so other children sitting with their lunches or playing kickball and four square. Lucy knew she was prone to overreacting. Of the pair, Megan was the cool and confident one who reeled Lucy back to earth when she panicked too soon or jumped to hasty conclusions. She tried to control her breathing as she slowly walked from the picnic table to the place on the sidewalk where she had seen the man.

Lucy stopped at the fence and looked all around her. She scanned the ground, the sidewalk beyond the fence and the thick grassy strip that spilled onto the sidewalk and the asphalt road beyond. Cars sat empty on the street. Nothing. The bell rang. The other kids began moving back to their classrooms. Lucy was in a daze.

"Wait...wait...wait..." She told herself. Maybe Megan had gone back to class early for some reason and just left her lunchbox. The yard was empty when she got back to the picnic table and picked up Megan's lunchbox.

In her heart, Lucy knew before she entered Mrs. White's fifth-grade classroom that Megan's seat would be empty. Her fear of overreacting was replaced now by sheer dread. She sat the lunchbox on Megan's desk, Dora's face down. She took her seat across from Megan's and placed her hands flat on her desk. Then she peeled them off the faux wood grain made sticky by the humidity, wrapped her arms tightly around herself and stared down at her lap.

Mrs. White was writing something on the chalkboard. After a minute she stopped and turned. Her eyes swept the class.

Lucy felt her chest constrict until she couldn't breathe. Her face crumpled and tears quickly ran down her cheeks to her chin. She continued to hug herself, struggling to get air into her lungs. In a moment, Mrs. White was at her side, kneeling down, enveloping the 10-year-old who wept on her shoulder.

The teacher glanced around her. Sitting near the door, Mrs. White saw the red-headed boy who was two inches taller than anyone else in the class and looked three years older, although he was only 11.

Lucy fought to get the words out.

Mrs. White looked up again. Like the rest of the class, Jack stared at them. He was frozen in place with his hand on the knob of the half-opened door. The teacher locked her eyes on those of the tall red head.