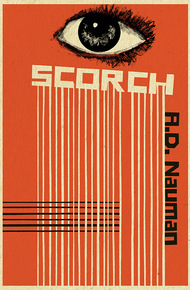 A.D. Nauman is a novelist and short story writer with a very cool day job: she is a professor of literacy education at a state university in Chicago, where she works with K-12 teachers to make the world a more literate place. A proud liberal and feminist, Nauman is a sociopolitical fiction writer who strives to illuminate how larger cultural contexts affect individuals' lives. Scorch was her debut novel, originally published in 2001 by Soft Skull Press. She is currently finishing a historical novel, set in Virginia during the Civil Rights era, about the daughter of a Klansman.

Nauman's short fiction has appeared in Necessary Fiction, TriQuarterly, The Literary Review, Roanoke Review, The Chicago Reader, Other Voices, O. Henry Festival Stories, Knee-Jerk, and many other literary journals. She is the recipient of an Illinois Arts Council Literary Award and has had work produced by Stories on Stage. Her fiction has also been nominated for a Pushcart Prize. Nauman lives in Oak Park, Illinois, with her partner and a highly pampered tuxedo cat.

In this near-future dystopia, the corporate take-over of American democracy is complete. Three huge conglomerates now run the country—everything is privatized. Wealth worship feeds income inequality; corporate propaganda determines everyone's thoughts and desires; and because everyone must work two or more jobs to survive in this economy, no one has the time, focus, or presence of mind to question what "everyone knows." No one, that is, until 30-year-old Arel Ashe begins to see things differently.

Arel works in an adstories department by day and a forgotten "public" library at night. Initially, she believes what everyone else does—that happiness comes with material success. But a disturbing event makes her begin to question her culture's common wisdoms. Pitted against the Corporacracy and a deranged self-help author turned religious zealot, Arel hatches a plan to save the world based on ideas she's discovered in a place where no one else would bother to look—old books.

Scorch, a dystopian novel in the tradition of 1984 and Brave New World, portrays life in a country free of Big Brother government, and in the hard grip of corporate greed. Revealed through the struggles of one character are the myriad ways in which extreme unregulated capitalism starves the human soul.

I acquired this novel, right out of the proverbial slush pile, for Soft Skull Press almost twenty years ago. Two decades later, Scorch isn't satire, it's the news. The person I hired to scan the text was shocked at how prescient Scorch is, and kept sending me links to articles showing that Nauman's predictions are coming true. – Nick Mamatas

Shivering, Arel rushed through the underground walkway to the old lot, then spotted her little red mock sports car—the thing she loved most in the world. A Sunco Toyota Zinger, with only nine more years of payments. She trotted toward it, reached out for it, ran her hand along its fender, stooped over the hood to sweep the day's adflyers off the windshield. Then climbed down into it and punched the ignition button. The dashboard was silent: she'd paid the extra fee to disconnect Sylexi, tired of the smooth android face continually popping up with traffic updates, weather reports, celebrity sightings, sales suggestions. Exit at Addision now for great prices on lingerie! Her old Holoco Honda would suddenly shout out. Don't miss this amazing sale at HoloMart! When Arel passed the exit, the disappointed voice would say, You missed the exit—but that's okay, and images of the sale items would appear on her dash-screen. Just touch which product you'd like to purchase, and I'll have it delivered conveniently to your door! In her new car, with the upgrade, she could control when the dash-screens came on.

On the highway, traffic crept. She got stuck behind minitrucks and megavans and a bus painted to look like a giant stick of cinnamon gum. She inched forward, inched, then stopped in the tunnel. She turned on the wheel screen and sorted her e-junk mail.

By the time she finished, she was at the other end of the tunnel, where the Chicago skyline glared in winter darkness—a carved pumpkin's mouth in neon—the green glass highrises separated by the shorter, older, rotting buildings. The old bleak brick flashed its block-letter messages: Fly FunAir, Call CopCo, Shop Drones-R-Us. The ads on the highrises were more sophisticated, in sync with the neo-post-modern style of the jeweled chrome outlining the huge windows and spikes of gold on the roofs. Poetic messages wrote themselves across the buildings in elegant script: "Zulu Beach—toast the sun"…"Devven Lee designs me." The biggest adscreen in the city, covering half of the Paterco-Willis Tower, played the same video over and over: From the mouth of a wide, diamond-studded barrel of oil rose a beautiful onyx-haired woman, nude, the thick black substance oozing down over her curves—her giant breasts, tiny waist, sleek thighs and legs, down to her ballerina-pointed toes—the slow glistening flow dripping from her toes into the barrel, until, in bold golden letters, "O-I-L" stamped itself across her face. Then, in curlicue letters across her chest: "Gorgeous." Last came the confident, matter-of-fact font across the barrel: "SunOil. All Your Power Comes From Us." A moment later, the woman plummeted back into the barrel, and her slow ascendance began again. There was nothing to do but see it, over and over and over.

Traffic crawled, crawled, stopped. Ahead, past the tunnel, rich people were flying onto the express lanes, their embossed fender emblems winking in the flood lights at the entrance between the express lane police. Arel rolled ahead another inch, another.

Then the honking began. An armless corpse dropped from the overpass onto a car roof and slid off onto the pavement between lanes, which made people honk more—now they'd have to steer around it until the Sunco body sweepers came. Buying the city streets had been Sunco's biggest mistake: there was no room to expand and people began to associate Sunco with inconvenience. Arel remembered it clearly. A tearful vice president had taken all the blame and resigned on prime-time television. Committees were formed and a PR campaign was launched pointing out the advantages of sitting in traffic for several hours a day. She remembered the jingle—"Oh it's fun to sit on the Kennedy, on the Kennedy in your car…" Commuters were shown working their screens, chatting happily on their sellfones, eating, sorting junk mail. Of course, Americans were too smart for such a ploy. Another tearful VP resigned: American consumers deserved the best, he burst out—Convenience. Then everyone felt sorry for Sunco, which seemed to be trying so hard, and was satisfied when the current CEO came up with Express-Choice—everyone knew it was only a matter of time until everyone was wealthy enough to buy their way into the express lanes.

In the meantime, traffic in the regular lanes crept, stopped. And now she had that annoying jingle in her head. The honking intensified. Three lanes over, a man jumped out of his Paterco Pontiac Predator and started shooting at the guy honking behind him. Arel didn't have the bullet-proof glass option but was too tired to duck. She could see the honker smiling, smug behind his Shooter-Safe windshield, the bullets bouncing off merrily. Finally the guy with the gun stopped shooting, ran over and kicked the other guy's hubcap, huffed back to his car. Arel was hungry.

She'd be late opening the library, but she pulled off the highway anyway, rolled past the abandoned cars smashed and burning on the roadside, and into the McDonald's drive-through. Steadily, efficiently, twenty lanes of cars rolled through the long bank of orange and yellow archways. She swiped her McCharge card and punched in her order: a McHealthy-Steak, the diet Mini-Fries, McPeas, a double-jumbo diet Coke. A real human voice, albeit recorded, came over the speaker: "Would you like to try a Chocolate McClare tonight?"

"Would you like to buy a limited-quantity nylon McJacket for spring—cobalt, daffodil, or ruby?"

"Would you like to purchase a subscription to McKids magazine, which comes with valuable coupons that will save you money at all McKids toy stores, clothing stores, daycare centers, movie theaters, and children's hospitals?"

"No!" How irritating: they'd gotten her demographics wrong.

Her food sped through the pneumatic tube and she rolled back onto the highway, eating, slurping. But still thirsty, and late opening the library again.