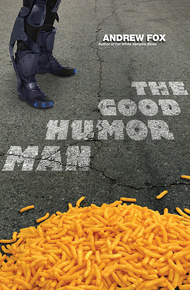 Andrew Fox is the author of the critically acclaimed novel Fat White Vampire Blues, once described as "Ann Rice meets A Confederacy of Dunces." Fox has been employed as a mime, public-safety advocate, playwright, and, after Hurricane Katrina, a part of FEMA's Gulf Coast Recovery Office. His influences include Marvel Comics, Planet of the Apes movies, and Ray Bradbury novels. Fox currently lives in Florida.

Can Elvis save the world sixty-four years after his death?

In this satiric romp inspired by Ray Bradbury's Fahrenheit 451, set in 2041, government-sanctioned vigilantes—the Good Humor Men—ruthlessly patrol the streets, immolating all fattening food products as illegal contraband. A pound of real chocolate is worth more on the black market than a kilo of cocaine. Evil "nutraceutical" company MannaSantos controls the food market with genetically modified products, such as "Leanie Lean" meats. But the craze for svelte healthfulness has reached a critical turning point, as a mysterious wasting plague threatens to starve all of humanity.

A lone ex-plastic surgeon and founding Good Humor Man, whose father performed a secret liposuction surgery on Elvis Presley, holds the key to humanity's future. In a mad dash to retrieve his family heirloom—the mortal remains of the King's belly fat—Dr. Louis Shmalzberg becomes entangled with a civil servant of questionable motives, an acquisitive assassin from a wealthy Caliphate, a power-mad preacher evangelizing anorexia, a beautiful young woman addicted to liposuction, and a homicidal clone from a MannaSantos experiment gone terribly wrong.

When junk food is outlawed, almost all of us will become outlaws. Good Humor Men patrol the streets, saving us from ourselves by incinerating anything we might actually want to eat. A bracing and hilarious look at the diet industry and the nanny state in a true day-after-tomorrow science fiction thriller. – Nick Mamatas

I remember pizza; real pizza. Deep-dish, Chicago-style, four-cheese pizza, fresh from the oven, the cheese steaming and bubbling on top like cooling lava.

We go over a sharp rut in the road. I'm in the Good Humor van, heading for Mex-Town. My balls have shrunk to the size of raisins. Whatever we're about to be faced with, it won't be a cake walk, like this morning was.

Two call-outs in one day. It's almost beyond belief. Our squad hasn't responded to more than one outbreak per quarter in nearly fifteen years. What in God's name is going on? It's almost as if an epidemic of gluttony has broken out in Southern California.

"Hey Lou, you feel comfortable handling one of these?" Mitch, my partner, my best friend, fondles a sawed-off shotgun in his lap like a favorite grandchild.

"No. I don't." The thought of using a gun terrifies me almost as much as the thought of having to make a show of force in Mex-Town.

The van is crowded with twice its normal complement. Mitch called in the San Clemente squad for backup. We've never worked with them before. I glance at their unfamiliar, nervous faces in the rear-view mirror and feel perspiration gather on my palms.

We're all old men. Alex, Jr., at forty, is the baby of the group, a quarter-century younger than most of us; he only suited up this morning because his father passed away two months ago and left us a man short. We belong out on a golf course, playing the back nine… not in the most anarchic part of the county, hunting for dangerous contraband.

Thousands of pounds of genuine American cheese, left over from before the nutrition laws, before the geneticists got their hands on the food supply, before the Second Great Depression. If they could manage to sell it, those Mex-Town thugs would end up the nation's wealthiest men. They've got a prize worth killing for.

This morning's raid was different. It felt like carnival time, like the old, good times. A couple blocks away from the community gym, our target, Mitch turned on the recorded calliope music, and I'd smiled. I appreciate tradition. We were going to make a show of it. We were going to show the young folks, the ones who'd never seen us pull off a raid, what the Good Humor Men were all about.

Mitch pulled the truck into the parking lot of the Rancho Bernardino Municipal Gymnasium. It felt bizarre that we were about to raid the gym; engaging in gluttony on these premises was like trying to snow ski on the rim of an active volcano. But it was nearly Christmas time, and the holiday season has always been when the weak-willed are most likely to take stupid risks.

We barged through the entrance, "Camptown Races" still blaring behind us. Sweaty faces of all ages turned in our direction, eyes wide. Mitch took the point. Seeing him in front of me, lugging his dragon, his miniature flamethrower, over his shoulder, thrilled me with a shower of memories. For a few seconds, I was a young man again, a commando fueled by delicious resolve. A zealot for a good cause. A believer.

Once the shock began fading from the onlooking faces, it was replaced by hesitant smiles, then a few thumbs-up signs. They were going to get to see a spectacle. Many of them had never seen us on the job; they'd only seen us driving our truck in the Thanksgiving Day parade. One young woman, dressed in gray, shapeless exercise clothes, began clapping. Her smile only accentuated the painful thinness of her face.

As we walked toward the offices in the back, the applause spread. Pour it on, I thought. This was the sound I'd been anticipating even more than the calliope music. Applause, public approbation, the affirmation of the good I do in the world.

Brad bashed in the doors that lead to the main office with the butt of his rifle. An old pro, like Mitch, he knew when to play to his audience. We crashed an old-fashioned office Christmas party. Sheet cake, red and green Christmas cookies, and some cloudy liquid substance in a punch bowl that's probably a rough analogue of eggnog. Some idiot has the rear window open and is frantically tossing potato chips, chocolate, and cartons of some sort of ice cream into the lot behind the building. As if that will do him any good.

"Brad, collect their health insurance cards," I said. It felt like reciting words from a script, playing a character. This isn't really me, I wanted to explain to the dozen county employees in the room. Soon to be ex-employees.

One man stared at Brad and me with pleading eyes. "I — I didn't get a chance to eat any of this stuff. I just got here. Ask them —" he gestured to his coworkers "— ask any one of them. They'll tell you. I didn't eat none of this stuff. Can't you, maybe, let me off easy?"

"You know we can't," I said. I despised him, as if he were a cockroach scurrying across the toe of my shoe. Someone always thinks they deserve special treatment. "Down the gullet or not, just being in the same room with this contraband makes you an accessory."

"Stay clean and you'll get it back in five years."

When the man refused to hand over his wallet, Brad dug it out of his pocket. It was as though he'd plucked out the man's heart. "But you don't understand — I get these seizures, and I need my pills — you gotta understand, there's no way I can afford the pills without my health card —"

My contemptuous feelings toward him evaporated. I'd prayed I could dodge the gut blow this one time, but I couldn't. Every damn raid within the past five years, I've hit this damn wall. I'm a physician. A healer. How could I deny a man his meds? But if I weakened, the whole edifice would collapse.

Mitch came to my rescue, as he always does. "Mister, you should've thought of that before you dug your fingers into the sheet cake."