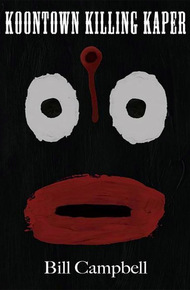 All the rappers in Koontown are being killed, and everybody thinks it is vampire crack babies who are doing the killing. Desperate, the police reach out to Genevieve "Jon Vee" Noire, a former supermodel and homicide detective now working as a private eye, to save the day.

Together with her former partner, Genevieve must navigate the dangerous world of gangsta rappers, shady record executives, corrupt cops and politicians, '80s pimps, welfare queens, secret sistah societies, Ubernoggin, and the National Guard. Can the ex-supermodel survive the chaos and insanity to save her beloved Koontown while it explodes all around her?

In what has been called "the Invisible Man of the Hip-Hop Generation," Campbell conducts a gleeful evisceration of the social tropes, stereotypes, and conspiracy theories running rampant in today's popular culture. Koontown Killing Kaper is one of the most outrageous, most hilarious, most controversial satires of our time that will make you question the very notion of "keeping it real."

Author/publisher Bill Campbell warned me against including his book in this bundle. It's a little…rough. It's been taught in university classrooms, and got Campbell from a local book festival. It helped launch African-American publishing company Rosarium, and led to several bookstores cancelling author events. Be careful! – Nick Mamatas

I LOOK GOOD. I know I do. I'm not bragging, not boasting. I'm not even trying to be conceited—I fear that comes naturally. It's definitely not a case of wishful thinking or self-deception. I'm not bouncing around like a Sky Cap with extra baggage for five people talking about how fine I am in the hopes that you may one day believe me.

I don't need any of that. My ego is utterly and completely comfortable with the truth—sometimes they even go out and have a drink together. It can stand tall all on its own and has not needed a man to lift it up in a very long time. After all, when the clock strikes twelve and the last beer is drained, who won't a man talk up? And when that foolhardy negro swaggers up to me with his "winning," Hennessy smile, and Barry Whites, "Damn, baby, you'd look good in a burlap bag," I just say, "I know," and sashay away. Because it's a fact. I did look good in that burlap. I still have the stills from that shoot. Benetton '91. I have that sack, too. It still fits.

My beauty is well-documented. You know it. You know me. Genevieve Noire. "Jon Vee." International supermodel—back in the day when that meant something. Cindy Crawford, Christie Brinkley, Iman, and me, Jon Vee. But what does any of that mean? I just know it was important to a lot of people. I can't even tell you why. My vamping for Versace never brought peace to the Middle East. Maybe hands to some perverts' members. But that was about it. I just know that no matter what I've done since—and I've done a lot—and no matter how important my work is now—and that can be a matter of life and death—I will never be as "important" nor as influential as I was when I was "one of the most beautiful girls in the world."

Those days are far behind me now. And though they were great for my bank account and definitely helped make me the woman I am today, I mostly look upon them as a silly blur. Paris, Milan, New York. Versace, Vuitton, Vanderbilt. A completely self-important world of absolutely no consequence.

And my place in it? My beautification of it? Utterly meaningless. After all, what is a pretty face worth? It can easily be replaced. Mine was. So yes, I look good. After all these years and all this added muscle, I am still a beautiful woman. It hasn't always been that way, and part of me wishes it had never been. Yet, another part of me, that part that can walk away from those Hennessy smiles and their mountain-sized promises in molehill packages, that part can still get a little thrill when I can look into its eyes, and still say, "Yes, I look good." After all, the eyes never lie.