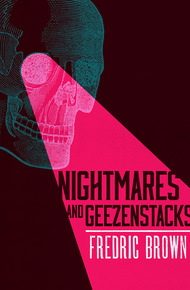 Born in 1906, Fredric Brown sold his first detective story in 1937, and by the early 1940s he was selling hundreds of stories to the detective and science fiction pulp magazines. His first novel, The Fabulous Clipjoint, was a substantial success, winning the Edgar Award for best first novel. Several other successes followed: What Mad Universe (1949), a classic of science fiction, The Screaming Mimi (1949), which was adapted as a film starring Anita Ekberg, and Here Comes a Candle (1950), an experimental novel told in a variety of alternating media formats. Brown would continue to write prolifically throughout the 1950s, primarily in the mystery and science fiction genres. He died in 1972.

Nightmares and Geezenstacks by Fredric Brown

One of the great pulp writers, Fredric Brown (1906-1972) combined a flair for the horrific, a quirky sense of humor, and a wild imagination, and published many classic novels in the mystery and science fiction genres. But he was also a master of the "short-short story," tales only a page or two in length, but hard-hitting and with a wicked twist at the end. Nightmares and Geezenstacks (1961) collects 47 short gems by Brown, ranging from science fiction to noir crime to horror, including the chilling and unforgettable "The Geezenstacks". Long unobtainable, Brown's classic collection returns to print for the first time in almost 40 years and is sure to please both longtime fans and those who are discovering this brilliant writer for the first time.

Nearly fifty stories in fewer than 150 pages, hitting any number of genres and always nailing a twist ending, learn why Frederic Brown was the master of microfiction, and one of the funniest authors on the planet. And also other planets. – Nick Mamatas

Walter Beauregard had been an accomplished and enthusiastic lecher for almost fifty years. Now, at the age of sixty-five, he was in danger of losing his qualifications for membership in the lechers' union. In danger of losing? Nay, let us be honest; he had lost. For three years now he had been to doctor after doctor, quack after quack, had tried nostrum after nostrum. All utterly to no avail.

Finally he remembered his books on magic and necromancy. They were books he had enjoyed collecting and reading as part of his extensive library, but he had never taken them seriously. Until now. What did he have to lose?

In a musty, evil-smelling but rare volume he found what he wanted. As it instructed, he drew the pentagram, copied the cabalistic markings, lighted the candles and read aloud the incantation.

There was a flash of light and a puff of smoke. And the demon. I won't describe the demon except to assure you that you wouldn't have liked him.

"What is your name?" Beauregard asked. He tried to make his voice steady but it trembled a little.

The demon made a sound somewhere between a shriek and a whistle, with overtones of a bull fiddle being played with a crosscut saw. Then he said, "But you won't be able to pronounce that. In your dull language it would translate as Nasty. Just call me Nasty. I suppose you want the usual thing."

"A wish, of course. All right, you can have it. But not three wishes; that business about three wishes is sheer superstition. One is all you get. And you won't like it."

"One is all I want. And I can't imagine not liking it."

"You'll find out. All right, I know what your wish is. And here is the answer to it." Nasty reached into thin air and his hand vanished and came back holding a pair of silvery-­looking swimming trunks. He held them out to Beauregard. "Wear them in good health," he said.

"What do they look like? Swimming trunks. But they're special. The material is out of the future, a few millenniums from now. It's indestructible; they'll never wear out or tear or snag. Nice stuff. But the spell on them is a plenty old one. Try them on and find out."

Walter Beauregard quickly stripped and put on the beautiful silvery swimming trunks. Immediately he felt wonderful. Virility coursed through him. He felt as though he were a young man again, just starting his lecherous career.

Quickly he put on a robe and slippers. (Have I mentioned that he was a rich man? And that his home was a penthouse atop the swankiest hotel in Atlantic City? He was, and it was.) He went downstairs in his private elevator and outside to the hotel's luxurious swimming pool. It was, as usual, surrounded by gorgeous Bikini-clad beauties showing off their wares under the pretense of acquiring sun tans, while they waited for propositions from wealthy men like Beauregard.

He took time choosing. But not too much time.

Two hours later, still clad in the wonderful magic trunks, he sat on the edge of his bed and stared at and sighed for the beautiful blonde who lay stretched out on the bed beside him, Bikiniless​—and sound asleep.

Nasty had been so right. And so well named. The miraculous trunks, the indestructible, untearable trunks worked perfectly. But if he took them off, or even let them down . . .