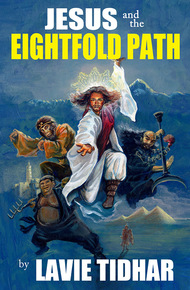 Lavie Tidhar is the author of the Jerwood Fiction Uncovered Prize winning and Premio Roma nominee A Man Lies Dreaming (2014), the World Fantasy Award winning Osama (2011) and of the Campbell Award winning and Locus and Clarke Award nominated Central Station (2016). His latest novels are Locus Award nominee Unholy Land (2018) and first children's novel Candy (2018). He is the author of many other novels, novellas and short stories.

Jesus and the Eightfold Path by Lavie Tidhar

Guided by a star, three strange companions from the East arrive in the barbarous land of Judea to seek a newborn child–a possible messiah to some, and the reincarnation of the Buddha to others.

Once a general in the Judean army, now a Roman agent, Josephus Flavius is sent by Caesar back to his home land to observe and report on the actions of the troubling young man now preaching sedition in the Galilee – a boy with the unsettling powers of kung-fu. . .

Their lives would collide in a cataclysmic confrontation between Romans and Jews, between empire and rebels–and change the world forever. . .

Are you ready for a Kung-Fu Christ completing A Journey to the West? Of course you are not. But then again, who could ever be? A hilarious but oddly reverent and touching satire of the world's great religious traditions, plus fighting! – Nick Mamatas

'Barbarous country,' Sūn Wùkōng said. He was tall and thin and had the wizened face of a monkey. He raised a hand and touched the gold band around his head. 'I could be back in the Bloom Mountains, or better yet, making play for the Jade Emperor's daughter.'

The fat companion beside him roared with laughter and said, 'Really, Monkey! The girls in these parts are not too bad. You are too aloof! Too selective! You are a connoisseur, whereas I –' he took two enormous fingers and pinched a lavish section of the pink ample skin of his belly – 'I am a democrat, a man of the people! I like to try everything!'

'Like the Princesses of the Moon?' the third companion, a quiet, narrow-shouldered man said. His name was Shā Wùjìng, and it was Monkey's turn to laugh as the fat man scowled and said, 'That was uncalled for, Sandy.'

'It was your own fault, Pigsy,' Sandy said. 'If only you learnt to keep your hands to yourself...'

'Like last night,' Monkey said, and Pigsy opened a snout-like mouth wide and grinned and said, 'I tell you again, Monkey, the lasses here are none too bad, and willing, for an exotic stranger and a charmer too.'

'Charmer!' Sandy said! 'The girls here must be barbarous indeed!'

'Never!' Sandy said, but Monkey smiled and said, 'You'll find a nice girl and settle down one day, Sandy,' and the monk blushed. He was not like the other two. He was more refined, and delicate.

Pigsy was back to his exploits of the night before. 'Such arms!' he said. 'Such belly! Such... such thighs!' His hands drew vulgar shapes in the air. 'She sounds like an elephant!' Monkey said, and Pigsy, not listening, said, 'I tell you again, Monkey, the girls here may be farmer-girls and chunky, but they know how to rut.'

'Enough!' Monkey said. He touched again the golden crown on his head. 'Time is growing short, and the stars will soon be in alignment. We should be there soon.'

'Sooner we get there, the sooner we can go back,' Sandy said. Monkey smiled; it was a small, strange smile, like that of a man who knows, or guesses, more than his companions; but he said nothing.

They had travelled far. Many weary days they spent, crossing the great sullen mountains beyond the Emperor's realm, hiking through treacherous snow and beside deep gorges. Many were the snow-demons they had fought, and many were the deep and ancient cave-dwellers, things of darkness and fear, that tried to waylay them on their way. A giant bird had taken Pigsy for a meal and carried him by its talons, to its high eyrie at the top of the world, and it took all of Monkey's power to rescue him. He had summoned a cloud, and he and Sandy rode it to the top, where the giant bird, its feathers the colour of blood and the sun, its scales glittering like jewels, was already pecking at Pigsy's pink, succulent flesh. Oh, how the once-Commander of the Heavenly Naval Forces shrieked! Oh how he cried! Eight babies did the monster bird have, eight sharp-beaked monstrosities clamouring for Pigsy's flesh!

The battle was lengthy and worthy of song. Sandy used his fighting spade against the bird, but it was of little use against her giant beak. Monkey plucked hairs from his body and blew on them, until soon there were many Monkeys flying around, fighting the bird, while all the while Pigsy screamed and screamed like a pig about to be devoured. Oh, they had laughed! It took Pigsy almost a week to get over his ordeal. Luckily they had found that hidden city high up in the Himalayas, where lights came from shining crystals and the women were fair and wore shimmering robes...

They had almost lost Sandy there, to the charms and grace of the beautiful Princess of the Pale Water, she who was like a mountain spring... they were two beings of water, she and the once-water ogre, and it was only the importance of the journey – and the wiles of Monkey, who had set out to seduce the princess – that saved the day. Long and hard the journey had been! Across the mountains, at last, and down into the hot lands below, and across, a vast distance of danger and temptation. There were nomads on the plains, strong harsh men who tried to attack the three travellers, and there were wizards too, of a new ilk not seen in the Middle Kingdom, preying on travellers, man-eaters and uncouth. There had been many fights, but always the three travellers were triumphant.

The lands gradually changed. The air became hot, and humid. The barrenness of the plains turned lush, and there were many trees, and their fruits were exotic and new, and Pigsy lusted after the fruits of the land, and the fruits of men's loins, too. At last there was a great crossing of a sea, by ship sturdy and taut of sail. 'A good craft,' Monkey said thoughtfully as he patted the beams of cedar, but Pigsy leered and said, 'Fishermen's tubs, Monkey! One Imperial ship would sink a whole fleet of them.'

'Perhaps,' Monkey said, and his wise monkey's eyes were thoughtful.

At last they had come to the barbarous land called Judea. They went as men, here, and old men at that. On the first night coming off the ship brigands tried to rob them. After that there had been no more attempts.