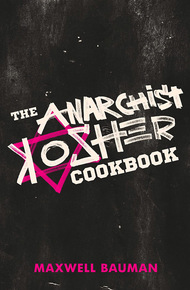 Maxwell Bauman is a halfway-decent Jewish boy from the Bronx. He is Editor-In-Chief of Door Is A Jar Literary Magazine.

Drop your dreidel and feast your eyes on The Anarchist Kosher Cookbook! Maxwell Bauman's debut collection of strange Jewish-themed stories will shock and entertain with a modern twist on burning bushes, virgin ghosts, leviathans, Baphomitzvahs, and how to create your own golem to fight off Neo Nazis. These stories transcend the mundane mashugana of life through page turning plots and memorable mensch and schmuck characters.

Straight out of the underground, and purchased with your Bar Mitzvah money, The Anarchist Kosher Cookbook gives you everything you ever wanted, or wanted to make fun of—such as a different kind of burning bush, and a golem brought to life to smash the Nazi menace. – Nick Mamatas

1.This recipe was passed down from my Bubbe for when law and order goes out the window. Can you hear the mob of skinheads getting closer? Their fiery, nationalist chants echo in the streets. What's there left for you to do? Get cooking of course.

2.This isn't the time to fry up some latkes, but inside this cookbook are the secrets for those hungry for revolution. These are the secrets to craft a protector for yourself in the same ancient way that God used to craft Adam. This guardian is known as the golem.

3.The first thing you'll need for your golem is clay. Go down to the riverbank and with your bare hands scoop up a bucket full of virgin soil. Be careful to sort out any pebbles or rocks. At sunset, submerge the dirt into a pot of boiling water and stir. Pour the mud onto a plate that has never been touched by meat and dairy at the same time. Take seven tablespoons of Kosher salt, one for the tears shed over each day of creation, and kneed it into the dirt.

4.You won't be using this clay to make a golem from scratch. You can use the remains of an old, shattered golem instead. You can find the parts of old golems in the attic of any synagogue. It'll be in the box labeled "Xmas Decorations."