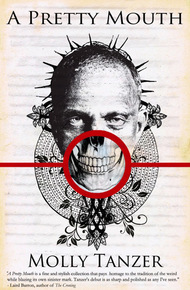 Molly Tanzer is the author of the novels Vermilion (NPR and io9.com Best Book of 2015), and the Diabolist's Library trilogy of literary fantasy novels—Creatures of Will and Temper, the Locus Award-nominated Creatures of Want and Ruin, and the forthcoming Creatures of Charm and Hunger. Her collection A Pretty Mouth was nominated for both the British Fantasy and Wonderland Book awards.

For more information about her short fiction and her eclectic editorial projects, follow her on Twitter @molly_the_tanz or on Instagram at @molly_tanzer. She lives in Colorado with her cat, Toad.

A Pretty Mouth by Molly Tanzer

Henry Milliner thinks his days of being the school pariah are over forever when he attracts the attention of Wadham College's coolest Fellow Commoner, St John Clement, the Lord Calipash. St John is everything Henry isn't: Brilliant, graceful, rich, universally respected. And as if that wasn't enough, St John is also the leader of the Blithe Company, the clique of Natural Philosophy majors who rule Wadham with style. But when being St John's protégé ends up becoming a weirder experience than Henry anticipated—and the Blithe Company doesn't quite turn out to be the decadent, debauched crew he dreamed of—Henry has some big decisions to make. Should he beg the forgiveness of his only friend, naive underclassman John Wilmot, 2nd Earl of Rochester, or should he ride it out with St John and try to come out on top?

Tangling with a Calipash is an invariably risky endeavor. From antiquity to the modern era, few who have encountered members of that family have benefited from the acquaintance. If only Henry knew the that Calipashes are notorious for their history of sinister schemes, lewd larks, and eldritch experiments, he would realize there are way worse things than being unpopular...

In four short stories and the title novella A Pretty Mouth, Molly Tanzer takes you on a darkly comical journey through history, literature, society, and genre fiction itself.

An amazing series of linked stories lampooning everything from the sexual mores of the aristocracy to the novels of P.G. Wodehouse all while tracing the genealogy of an extremely debauched yet fascinating family across the centuries. An award nominee on two continents, this book satirizes everything it touches, and it touches many things. – Nick Mamatas

"The Infernal History of the Ivybridge Twins"—from A Pretty Mouth

Concerning the life and death of St. John Fitzroy, Lord Calipash—the suffering of the Lady Calipash—the unsavory endeavors of Lord Calipash's cousin Mr. Villein—as well as an account of the curious circumstances surrounding the birth of the future Lord Calipash and his twin sister

In the county of Devonshire, in the parish of Ivybridge, stood the ancestral home of the Lords Calipash. Calipash Manor was large, built sturdily of the local limestone, and had stood for many years without fire or other catastrophe marring its expanse. No one could impugn the size and antiquity of the house, yet often one or another of those among Lord Calipash's acquaintance might be heard to comment that the Manor had a rather rambling, hodgepodge look to it, and this could not be easily refuted without the peril of speaking a falsehood. The reason for this was that the Lords Calipash had always been the very essence of English patriotism, and rather than ever tearing down any part of the house and building anew, each Lord Calipash had chosen to make additions and improvements to older structures. Thus, though the prospect was somewhat sprawling, it served as a pleasant enough reminder of the various styles of Devonian architecture, and became something of a local attraction.

St. John Fitzroy, Lord Calipash, was a handsome man, tall, fair-haired, and blue-eyed. He had been bred up as any gentleman of rank and fortune might be, and therefore the manner of his death was more singular than any aspect of his life. Now, given that this is, indeed, an Infernal History, the sad circumstances surrounding this good man's unexpected and early demise demand attention by the author, and they are inextricably linked with the Lord Calipash's cousin, a young scholar called Mr. Villein, who will figure more prominently in this narrative than his nobler relation.

Mr. Villein came to stay at Calipash Manor during the Seven Years' War, in order to prevent his being conscripted into the French army. Though indifference had previously characterized the relationship between Lord Calipash and Mr. Villein (Mr. Villein belonging to a significantly lower branch of the family tree), when Mr. Villein wrote to Lord Calipash to beg sanctuary, the good Lord would not deny his own flesh and blood. This was not to say, however, that Lord Calipash was above subtly encouraging his own flesh and blood to make his stay a short one, and to that end, he gave Mr. Villein the tower bedroom that had been built by one of the more eccentric Lords some generations prior to our tale, who so enjoyed pretending to be the Lady Jane Grey that he had the edifice constructed so his wife could dress up as member of the Privy Council and keep him locked up there for as long as nine days at a stretch. But that was not the reason Lord Calipash bade his cousin reside there—the tower was a drafty place, and given to damp, and thus seemed certain of securing Mr. Villein's speedy departure. As it turns out, however, the two men were so unlike one another, that what Lord Calipash thought was an insulting situation, Mr. Villein found entirely salubrious, and so, happily, out of a case of simple misunderstanding grew an affection, founded on deepest admiration for Mr. Villein's part, and for Lord Calipash's, enjoyment of toadying.

All the long years of the international conflict Mr. Villein remained at Calipash Manor, and with the passing of each and every day he came more into the confidence of Lord Calipash, until it was not an uncommon occurrence to hear members of Lord Calipash's circle using words like inseparable to describe their relationship. Then, only six months before the signing of the Treaty of Paris, the possibility of continued fellowship between Lord Calipash and Mr. Villein was quite suddenly extinguished. A Mr. Fellingworth moved into the neighborhood with his family, among them his daughter of fifteen years, Miss Alys Fellingworth. Dark of hair and eye but pale of cheek, her beauty did not go long unnoticed by the local swains. She had many suitors and many offers, but from among a nosegay of sparks she chose as her favorite blossom the Lord Calipash.

Mr. Villein had also been among Miss Fellingworth's admirers, and her decision wounded him—not so much that he refused to come to the wedding (he was very fond of cake), but certainly enough that all the love Mr. Villein had felt for Lord Calipash was instantly converted, as if by alchemy, to pure hatred. In his dolor, Mr. Villein managed to convince himself that Miss Fellingworth's father had pressured her to accept Lord Calipash's offer for the sake of his rank and income, against her true inclinations; that had she been allowed to pick her heart's choice, she certainly would have accepted Mr. Villein's suit rather than his cousin's. Such notions occupied Mr. Villein's thoughts whenever he saw the happy couple together, and every day his mind became more and more inhospitable to any pleasure he might have otherwise felt on account of his friend's newfound felicity.

A reader of this history might well wonder why Mr. Villein did not quit Calipash Manor, given that his situation, previously so agreeable, he now found intolerable. Mr. Villein was, however, loath to leave England. He had received a letter from his sister informing him that during his absence, his modest home had been commandeered by the army, and thus his furniture was in want of replacing, his lands trampled without hope of harvest, his stores pilfered, and, perhaps worst of all, his wretched sister was with child by an Austrian soldier who had, it seemed, lied about his interest in playing the rôle of father beyond the few minutes required to grant him that status. It seemed prudent to Mr. Villein to keep apart from such appalling circumstances for as long as possible.