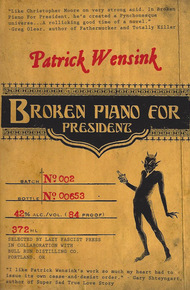 Patrick Wensink is the author of five books for grownups, including the bestseller, Broken Piano for President. NPR named his most recent novel, Fake Fruit Factory, one of the best books of 2015. His journalism appears in the New York Times, Esquire, Salon, Men's Health, Oxford American and others. In 2017, HarperCollins published his first children's book, Go! Go! Gorillas!. The sequel, Gorillas Go Bananas will hit shelves in 2018. He lives in Portland, OR with his wife and son and fragile ego.

Ever drank too much and forgot what happened? Don't be embarrassed. Deshler Dean faces this problem every day of his life.

Dean is far more brilliant and productive when he's blackout drunk. In the last few months alone, he has invented a hamburger more addictive than crystal meth, scored a six-figure record contract for his terrible art rock band, and started dating a woman he doesn't even recognize. Worse yet, he has become entangled in the biggest war since the Allies took on Germany.

When rival fast food chains duke it out for control over Dean's burger-inventing genius, Dean and his band mates plunge into the absurd world of corporate paranoia and greed. As the violence of the burger wars spills out onto the streets, it's up to them to win over the hearts (and stomachs) of the American people and save the country from the equivalent of a deep-fried nuclear warhead.

With the humor of Christopher Moore and the madcap sprawl of Thomas Pynchon, Broken Piano for President is a comic masterpiece about the fast food industry, booze, and the necessity to choose happiness over work and security.

This novel has everything, except the one thing that made it a best-seller: the original cover that parodied the iconic Jack Daniels label. Corporate paranoia, the world's tastiest hamburger, astronauts in peril, and the world's most forgetful and famous black-out drunk. Don't worry, a piano doesn't run for President, but one probably should at this point. – Nick Mamatas

Hangovers are nothing new for our iron-livered friend, but that doesn't mean they're not annoying. Hangovers are some black hair floating in life's martini. Worse yet, Dean would still be sleeping if not for this headache—a jagged rotation of skull- crushing bee stings and waves of calm.

The whole routine is so familiar. Familiar, except for this back seat.

Outside the car, birds start talking, morning sunshine grows full and windshield frost melts by the minute. That thin sheet of ice gets watery at the edges, white crystals evolving to something invisible.

Inside, he lifts from a leg-curled knot, yawns, rubs at stubble and glimpses around. The upholstery is white leather and smooth. The dash is wood-grained like antique tables.

A golden hamburger swings from a thin chain around the rearview and captures Dean's attention. The perfectly carved medallion seems heavy, freckled by solid gold sesame seeds. It locks his eyes for a few moments. He's seen this thing before, but it's still so foreign.

The morning takes further shape like so many before it: with Broken Piano for President scratching around the tape deck in his head.

Dry lips mouthing the words to his favorite song, Dean is maybe even a little proud for not sleeping outside again after such a boozy night. This isn't Hell, he thinks, frisking his zipper. For one, I wouldn't have dry pants in Hell. He smiles until both temples summon a lightning bolt of agony.

Even with heartburn sending lava up his chest, Dean's anxious to tell friends about this caper.

Waking up in an expensive car. Wow. This could be—he pauses until the swelling skull softens—Hall of Fame material. This hangover morning is fast turning fine and rosy, filling with

Pints of coffee. With a sprinkle of sugar. No cream. A hot gulp so bitter it'll shock away any headache for miles. Coffee sounds like magic as he admires his breath forming in the frigid air.

Dangling, that hamburger blinks golden Morse code. It's all so familiar. Maybe. Concerns of automobile jewelry and familiarity flash away when Deshler makes a serious mistake. Dean commits an error that might just punch a one-way ticket to federal prison. It's a gaffe he doesn't even know he's committed until it's over: Deshler Dean simply looks at the front passenger seat.

There, he sees it.

Dean's not sure how to classify this.

He rubs both eyes like a mirage, but this isn't the desert.

First off, it's bone-breaking cold. Secondly, there's just no escaping this disaster in the car's white leather bucket seat.

He rips a long, fake cough. A bronchitis bark. Nothing moves but the burger around the mirror.

That settles things. He is not alone. Or, technically, he is.

Broken Piano crashes back through Dean's mind. The tune helps him focus and can't be unstuck. The drums are roadside bombs and the guitar squeals like 747 tires touching down.

Most people say it's the worst song ever written.

Dean takes that as a compliment.

Sunshine warms a hole in the iced windshield. It highlights Dean's hands—fisted tight this whole time. His fingers sting and he is positive this morning isn't Hall of Fame worthy.

• One year ago: Dunkin' Donuts.

Normally, this wouldn't have been a problem. However, he woke up to a stunned morning manager kicking his feet. In a fit of drunken grace, apparently, Deshler broke into the locked shop without tripping an alarm and passed out on some sacks of flour. He escaped handcuffs by a cruller-width.

Deshler had no idea why he was standing in front of the class, but realized everyone was staring. His panic kicked in when Professor Adlaf spoke up, "That was an excellent presentation, Mister Dean, truly original. But now I'd like to ask you a few questions about Guerrilla Marketing if I may."