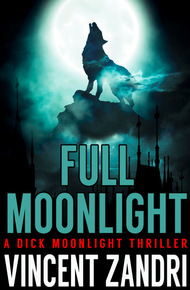 Vincent Zandri is the New York Times and USA Today bestselling author of The Innocent, Godchild, The Remains, Moonlight Falls, The Concrete Pearl, Moonlight Rises, Scream Catcher, Blue Moonlight, Murder By Moonlight, The Guilty, Moonlight Sonata, Moonlight Weeps, Full Moonlight, The Shroud Key, and the forthcoming, The Breakup. He is also the author of numerous Amazon bestselling digital shorts including Pathological, True Stories and Moonlight Mafia, as well as the coauthor of Deadly Dozen which sold more than 90,000 copies in its first two months of publication. Harlan Coben has described The Innocent (formerly As Catch Can) as "...gritty, fast-paced, lyrical and haunting," while the New York Post called it "Sensational...Masterful...Brilliant!"

Zandri's list of domestic publishers include Delacorte, Dell, Down and Out Books, and Thomas & Mercer, while his foreign publisher is Meme Publishers of Milan and Paris. An MFA in Writing graduate of Vermont College, Zandri's work is translated, or soon to be translated, into many languages including the Dutch, Russian, French, Italian, German, and Japanese. A freelance photo-journalist for Living Ready Magazine, RT, Globalspec, inTravel Magazine, along with several other global news agencies and publications, Zandri lives in New York and Florence, Italy. For more go to vincentzandri.com

Some things are not as they appear. Especially if you're Dick Moonlight—a P.I. with a piece of .22 caliber hollow-point bullet hopelessly lodged inside his brain, making his sudden death at any given time a real possibility. When he's hired to look into some mysterious carcass mutilations taking place at the historic Albany Rural Cemetery, Moonlight encounters a nightmare worse than death. A nightmare that haunts him like the bone-shattering howl of a werewolf, and that takes place under the cover of a full moon...From USA TODAY Bestselling author, Vincent Zandri, comes a 42 page dark, paranormal, action-packed novella for those who love suspense and who wish to dive into the entire bestselling Dick Moonlight PI series, starting with Moonlight Falls and then proceeding to Moonlight Rises, Blue Moonlight, Murder By Moonlight, Moonlight Sonata and coming soon, Moonlight Weeps!

We’ve actually did the deal with Vincent whilst he was in a jungle in India. That kinda fitted for me perfectly what I thought Vincent would be when we finally made contact. His novella, Full Moonlight is a perfect pull for readers who want a new PI series to get their teeth into! This one is fast, lyrical and leaves you wanting more. – Paul O'Brien

Heart's not responding to all the crazy shit the EMTs have been throwing at him for going on ten minutes now. Man's shirt has been torn open, his trouser belt unbuckled, jeans unbuttoned, unzipped, naked chest exposed to the cold, dark, overcast October elements inside the ancient Albany Rural Cemetery.

The team of EMTs are aghast. They've never encountered something like this before.

Man's arrested heart isn't the only problem here. Not by a long shot. Man's skin's been shredded, as though ripped open by claws. His face looks like so much hamburger, the crest of his nose split open so wide, if it were not for the blood, you would see right down into his brains. His left eye has been torn out, the eyeball now resting on his right cheek by a strand of purple muscle tissue that throbs like an electric wire still connected to a high voltage current. His shaved scalp is scraped to the bone, and the small, dime-sized scar located beside his right earlobe has also been ripped right down its center, making scar tissue out of scar tissue.

Man's lost a lot of blood.

Pints of the stuff.

So much blood that moving him right now would be like slamming the lid closed, nailing the coffin shut. EMT team's got no choice but to try an on-site transfusion with the O Positive blood supply they keep on hand for just such an emergency. But then, they've never faced just such an emergency. Not like this. This is nothing they've ever witnessed before. They've come across dog bites, snake bites, even bites from horses on the few farms left scattered across what remains of Albany County's countryside.

A mauling that's occurred in Albany's oldest cemetery at or around eleven thirty at night under what would have been a full moon. A blue moon. That is, had the weather cooperated. It's a miracle anyone even found the body in the cloud-covered darkness and the rain. But then, as luck would have it, the cemetery's caretaker suffers from an incurable insomnia. What's a cemetery caretaker do when he can't sleep at night? He walks the cemetery, searching for ghosts. Instead, he discovers the body of a P.I. who's been torn to shreds.

Crew is reverentially down on its knees, working hard on the man's torn open chest. But it's no use. They're not getting a pulse. He's bleeding out so fast, the transfusions can't keep up.

Head EMT leans up straight, wipes blood onto the blue pants that cover his thighs. He's not sure if the beads of water dripping off his face are sweat or rain water. When it pours over his lips, he realizes it's both. He angles his wrist to get a view of his watch face, thumbs the little button that lights the face up in a blue, iridescent glow. He makes out the time at 11:59 and 40 seconds.

"Let's call it people," he says with an exasperated sigh.

The others remove their hands from the now dead man, lean back on their heels, the disappointment painting their faces like the blood that smears their hands.

"Who the fuck could have done this to him?" the second man says.

"It had to be an animal of some kind," says the third and final medical tech. A woman. "A big dog or something."

"Not even a dog could do this," says Head EMT. "It would have to be as big and strong as a fucking raptor. And they been dead for eons."

"Since the Jurassic," says Second Man, trying for a smile. "I got Jurassic Park on the Blue Ray."

"Can it," says the woman, standing, going for a fresh body bag stored in the back of the van. "What's the official time?"

Head EMT stands, only now feeling the soreness in his knees. He looks at his watch once more.

"Let's make it easy, Kelly, and call it at midnight. Kind of poetic after all."

"Agreed, Steve," says the woman, pulling out a bag, tossing it to the grass-covered floor. "You agree, Ted?"

Ted pulls a wallet from the back pocket of the dead man. Pulls out a laminated ID of some kind, holds it up to the light of the black mini Maglite LED he's now got jammed between his teeth like a cigar.

"Whatever," he mumbles. Then, "Moonlight. Poor guy's name was Moonlight. And he was a private detective. Can you believe it? That's hot shit."

"Sure, what's so hard to believe?" says Steve, staring down at his watch one last time.

The shift occurs then. The kind of atmospheric shift that can be both seen and felt inside your body. A shift in the weather. The rains stops. And the clouds open up, like Christ Himself is about to make a surprise appearance from the heavens.

"Midnight on the dime," says Steve.

"Got it," says Kelly, recording the data on the electronic form on the laptop computer.

Then comes a cough. Followed by a cry. Followed by another cough, and the spitting up of blood. The chest on the body of the dead man heaves. Limbs tremble. He suddenly sits up straight, like his backbone were made not of bone but of heavy springs. His mouth now wide open, he issues a howling scream, loud and piercing enough to crack the enamel on a man's teeth.

Ted lunges back, the Maglite falling out of his mouth.

"What the fuck!" he screams.

Kelly begins to cry and weep. She wants to scream but can't work up the necessary air.

The man's blood is disappearing, as if a ghost were wiping him clean. His shredded skin and flesh are disappearing. The wounds that scarred his head are now healed. Only his shredded clothing remains as proof of his having been mauled. He picks himself up from off the ground, stands, wide-eyed and disbelieving.

"Hey, where'd you guys come from?" he smiles.