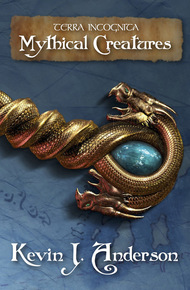 An original, standalone story in the Terra Incognita universe: A prester in search of penance accepts an assignment to the rugged Soeland Islands, but he must confront his faith after he is cast overboard and then rescued by a mythical creature that the Scriptures tell him cannot exist. BONUS: Also contains the complete story and lyrics (written by Kevin J. Anderson & Rebecca Moesta) for the two Terra Incognita crossover rock CDs performed by Roswell Six.

The prow of the Compass cut the rough gray waters like a knife carving a Landing Day roast. Prester Ormun closed his eyes and pushed away all his pleasant memories of the traditional holiday . . . or any other family memories, for that matter. Those were behind him now; only bleak settlements on the scattered Soeland Islands lay ahead. The prester had a difficult path to follow, even if he did not understand God's reasoning behind it.

The ship's timbers creaked, its damp sails sighed, and he felt spray on his face, blown by the coming storm. Dobri, the bright-eyed cabin boy, came up beside him, leaning over the bow to peer down into the choppy waves. "Are you looking for sylkas, Prester? They say sometimes you can see them in the whitecaps just before a squall."

"I do not believe in sylkas. And neither should you." Prester Ormun knew that for a young man like this, the world was filled with mysteries and wonders, as well as ignorance. It was his appointed task to enlighten the people of the islands.

The cabin boy squinted at the sea, which looked leaden under the threatening sky. "They're real, Prester—beautiful women with golden hair or seaweed all over their bodies. Other sailors have seen them."

"I don't care what other sailors say. Sylkas do not exist. It is written in the Book of Aiden that God created the peoples of the land, but only fish, seals, whales, and sea serpents inhabit the sea—no intelligent creatures. I can show you the Scriptures, if you like." Since Ormun knew the cabin boy couldn't read, the proof would be lost on him.

Dobri was both disappointed and skeptical about the prester's pronouncement. He had grown up in a small fishing village, and this was his first voyage away from home; he wanted to believe all the wondrous, imaginative stories, whether or not they were true. Now the boy gazed ahead, intent on spotting one of the imaginary sylkas so he could point out the creature to Ormun.

With a pang, the prester realized that his own son Aleo would have been about Dobri's age now. . . .

A large wave gushed over the Compass's bow, and the cabin boy scuttled away, but the prester did not try to avoid the splash; instead, he let it wash away his past again. His family was gone, and nothing remained for him in the city of Calay. That was why he'd been sent across the rough waters to the Soeland Islands. A new chance . . . a last chance.

The church's prester-marshall had sent Ormun to preach among the roughshod and hardy islanders; he would bring the Book of Aiden to comfort the people in their storms and cold northerly winds. Ormun accepted his first mission with neither enthusiasm nor complaint. He was humble enough not to expect redemption, but he did hope to achieve something positive with whatever remained of his life. That he was all he asked God for. . . .

Back in Calay, before he became a prester, Ormun had been a shoemaker with a wife and two children, a home, friends—a lifetime ago, or a year ago, depending on whether he measured time by a calendar or by the gulf in his heart.

The gray plague had swept through the Craftsmen's District, as it did every few years. Shops closed their doors and latched the window shutters. But Ormun had his family to feed: his son, his daughter, and his wife, a dark-haired, tan-skinned beauty named Risula. And so he kept working, while others hid.

He never knew which customer exposed him to the plague. Ormun lay shivering in bed for days while his family tended him: Aleo, only twelve years old, acting as the man of the house, Risula giving him salty broth to drink; even little Essa brought him flowers that she'd picked outside.

Ormun gained strength at first, but suffered a relapse, falling into a deep fever, sleeping like the dead, drenching the bedclothes in cold sweat. His last murky memory was of Risula leading shushing their daughter and leading her away, telling her to let her father sleep. And then his wife had started coughing. . . .

When his fever broke, Ormun emerged from his coma, feeling weak barely able to open his crusted eyes. His throat was parched, and he called out for water, but heard nothing. The house seemed quiet, much too quiet. After he recovered enough strength to crawl out of bed, he found his family huddled together, dead, victims of the fever that he had somehow survived.

Ormun had walked away from his home to wander the streets in a daze, until he finally came upon the kirk. He stumbled inside, and the local prester cared for him, read to him from the Book of Aiden. It was then Ormun decided what his mission in life must be. The gray plague had left him with only the shell of a heart, devoid of laughter and love. Clutching at the idea of service to the church as if it were an anchor of hope, he read the Book several times through, and debated with great fervor. When the kindly local prester could no longer answer his questions, he sent the gaunt and intense Ormun to the main kirk in Calay, where he met with the prester-marshall himself.

Cast adrift in life, Ormun begged the church leader for a new course to set. The prester-marshall did not try to explain God's personal message for Ormun, didn't pretend to reveal the purpose behind all the pain he had suffered. "I know a place where you can be of service. The Soelanders need you, and I think you belong there." He anointed Ormun a prester and presented him with the Book of their faith and the fishhook pendant that was its symbol.

No one described Soeland as a pleasant place to live, but that mattered not a whit to Ormun. He took his Book and his letters of passage, and requested a bunk on the Compass, which was ready to sail back for the islands. . . .

Now the sea grew rough, and waves rocked the vessel. Captain Endre Stillen came to join the prester, looking troubled. He was a red-bearded man with a muscular chest and a potbelly as hard as a wine cask. "Your cabin would be more comfortable, Prester. No sense staying out here in the storm—the weather is going to get worse."

Stillen shot an uncertain glance to the anxious cabin boy who hovered nearby. "Dobri says that you don't believe in the mysteries of the sea." He raised his bushy eyebrows.

"The ocean is vast and uncharted, and we've all seen things we can't explain. I'm as inclined to believe in sylkas as in any other creature. If nothing else, it gives me hope to know that those dark waters might contain benevolent souls, should anything happen to my ship."

"I don't need mythical creatures to give me hope, Captain. The Book of Aiden says that sylkas don't exist. Therefore they don't exist. It doesn't matter what foolish tales you've heard or what you think you've seen."

The conversation reminded Ormun of a recent outspoken stargazer who had adapted a seaman's spyglass in order to stare at the stars and planets in the night sky. The astronomer convinced himself that he saw tiny satellites circling one of the planets—an impossible idea. To prove his assertion, the stargazer had asked the prester-marshall to observe for himself; but the church leader refused to raise the spyglass to his eye. "The Book of Aiden tells us that God made the world as the center of all things. Therefore other satellites cannot circle one of the tiny planets in the sky. I have no need to look, when I already know." He had handed the telescope back to the baffled astronomer. Ormun had considered it an amazingly profound demonstration of the prester-marshall's unshakable faith. He only hoped he could be as worthy someday.

Seeing that the prester's mind was set, Captain Stillen chose not to pursue the argument. "Those legends are a vital part of Soelander life and folklore, Prester. You'll be in for some lively discussions when you get to the fishing towns, that's for certain."

"I'm not afraid of debate."

The captain ordered the sails trimmed against the squall. As the winds picked up, waves hammered the side of the ship. Most of the crew hurried belowdecks before the rain started to sheet down.

Dobri yelped, pointing off to starboard. "I saw one! Look, Prester—it's a sylka!"

Ormun froze, wanting not to look, almost strong enough to refuse, but he couldn't help himself. He turned to where the boy pointed—and that was his weakness, his failure.

While he looked in the other direction, a rogue wave swamped the bow and gushed across the deck with enough force to knock him overboard. He reached out, grabbed for anything. His fingers caught the slick wood, but couldn't get a grip. The rush of curling foam carried him overboard into the wide gulf of the sea.