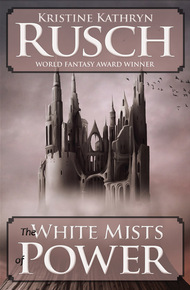 The White Mists of Power by Kristine Kathryn Rusch

An innocent excited boy, a prince and heir, takes his first journey to the city. The streets teem with merchants in velvet robes, magicians, half-mad preachers, with life and color, poverty and noise. He doesn't want to miss any of it.

But this is the last journey in his life as a prince. Soon he will be abandoned and declared dead. Soon he will be utterly alone, faced only with survival and what will become the driving force of his life: the quest to recover his stolen inheritance, his usurped throne. His home.

A story of cities and palaces, of power-hungry lords and ladies scheming inside a magically threatened land. Intricate, compelling, The White Mists of Power is the debut novel of a woman who has gone on to have a seismic impact on the science fiction and fantasy field.

THE WIND BLEW cold off the hills, rustling branches and making the whistle-wood trees moan. Adric shuddered and wrapped his cloak tightly around his shoulders. He glanced back at the great stone palace and, beyond it, the spires of the city. No one had seen him leave. He let out a small sigh. His father would be so angry if he found out where Adric was going.

He turned and faced the grove of whistle-wood trees. The trees bent and huddled together like old men. The pitted bark caught the wind, sent it through with a tone that changed in pitch with the wind speed. Some said the Old Ones lived in the whistle-wood trees. Adric believed it. He thought he saw faces shifting in the black wood.

The moans grew into shrieks. Adric put his hand in his pocket and gripped the bell. The Enos wouldn't hear him, not on an afternoon like this. They would think the bell chime was the cry of a tree. He stared at the hint of the cave opening that he could see through the trees. He might never get another chance to approach the Enos Cache.

He closed his eyes and swallowed heavily. The tree shrieks sounded almost like laughter. He wondered what the Old Ones thought of him, a ten-year-old boy shivering at the edge of the grove. They knew his future. And so, said the legends, did the Enos. He had to know if he would be a strong leader like Gerusha, or if he would become as useless as his father.

The wind rustled his hair and then died. The shrieking laughter faded. Adric pulled the bell from his pocket. He gripped the handle when a hand covered his own.

"No need, Highness." The voice was soft, raspy, as pitted as the whistle-wood trees.

Adric made himself turn, although his heart thudded against his ribs. An old woman stood beside him. Her skin was dark, wrinkled, and cracked. Her wispy white hair hung to her shoulders. She wore a long gray robe belted at the waist. She looked normal except for her eyes—eyes with no whites, eyes as black and deep as the mouth of the cave.

Her hand tightened on his. "You have come to find out if you will be loved."

He shook his head. His heart had moved into his throat. "I—" His voice broke and he cleared his throat. "I came to find out my future."

Her smile was slow. "A ruler is loved differently than any other, Highness."

"I didn't come here to find out about love," he said. He had never been this close to an Enos before. He didn't realize how spooky the black eyes were, how alien they made a face. "I came to find out what will happen to me."

The wind began again. The trees let out a soft, deep hum. When Adric didn't answer her question, the Enos sighed. "Very well, then. Come with me."

She led him through the whistle-wood trees to a small clearing. No grass covered the floor, only dirt and the stumps of trees. A small stone hut with a ridged roof sat in the center of the clearing. Adric stopped. "Aren't we going to the cave?"

The Enos looked at him. A clear point of light radiated from her eyes. "Do they teach you nothing at the palace?"

The Enos shook her head. "Humans are not allowed into the halls of the Cache Enos, Highness. It is our agreement."

"Oh," Adric said, feeling a familiar frustration. He wanted to know so much and they allowed him so little. The ballads said nothing about pacts with the Cache Enos. He followed her across the soft dirt and into the hut.

The hut was chill and damp, even though Kilot had not seen rain for many months. The Enos lit three candles, casting a soft light about the room. A wooden table sat in the center of the room, surrounded by four chairs. A cot rested off to one side, near the fireplace. In the half-light the Enos seemed to have no eyes at all.

Adric pulled out a chair and sat at the table. He ran a hand along the pitted surface, feeling the ridges and bumps. The table was made of whistle-wood. He tried to stop his hands from shaking. Carving whistle-wood was forbidden.

The Enos sat across from him. "Place your hands flat on the table," she said.

Adric did as he was told.

"You wish to see your future," she said, and he could hear the question in her tone. He nodded. She moved a candle onto the table. "I will do my best, but remember: time travels in circles through the mind. All future, all past, all present, is a living entity that exists on its own plane."

She covered his hands with her own. Her palms were cool and work-roughened. A sharp pulling, almost a pain, traveled through him and out his fingers. The wooden surface of the table turned hot, and the Enos flung her head back. For a moment Adric thought she was going to faint. Then she brought herself upright, her eyes empty.

"I see a man running through the forest, a pack of hounds at his heels," she said, her voice flat. "He wears rags, but carries the white mists of power within his heart. The same man sits on a dais, hearing petitions. The people believe him to be their protector, but the one he protects is you."

The whistle-wood burned into his palms, but the Enos's hands froze Adric's fingers and wrists. His eyes stung and a throbbing began in the back of his head.

"They train you to be ruled as your father is ruled, as your grandfather was ruled before him. A knife glistens in the darkness. A simple silver ring adorns the hand that guides the weapon on its deadly path, the path that seals the darkness forever."

She released him. He yanked his hands off the table and held them against his chest. The pain had grown worse.

The Enos bowed her head, took a deep breath, and then looked at him.

"What does it mean?" Adric asked.

Her eyes were a faint point of candlelight reflecting in the darkness. "I do not know, child," she said. "I never know."

"But you said you would tell me what my future is." Adric rubbed his hands. His palms were reddening, blistering.

"And so I have," she said. "I did not tell you I would interpret the meaning, for I cannot. I can see the present, Highness, perhaps only a bit more clearly than you can."

The Enos smiled, extinguishing the candlelight in her eyes. "The Old Ones think it can. You wanted me to tell you a bright, beautiful future, to wipe away your sadness. Yet you want to be a great leader like Gerusha. Great leaders are born of hardship, Highness. No one loved Gerusha either."

"My father loves me." Adric held his sore hands together, wishing he had some ointment.

The Enos pinched out the candle on the table. "That is not what your heart tells me."

Adric extended his blistering palms to her. "You burned me."

She extinguished the second candle. The near darkness made her seem younger. "Pain is the price we pay for knowledge, Highness," she said softly.