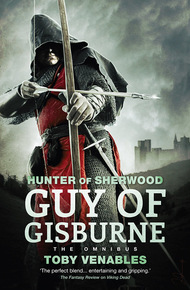 Toby Venables is a novelist, screenwriter and lecturer in film and creative writing at Anglia Ruskin University in Cambridge. He grew up watching old Universal horror movies when his parents thought he was asleep, reading 2000AD and obsessing about Beowulf. There was probably a bit more to it, but he can't quite remember what it was.

He has since worked as a journalist and magazine editor – launching magazines in Cambridge, Peterborough, Oxford and Bristol – and once orchestrated an elaborate Halloween hoax for which he built and photographed a werewolf. He still works as a freelance copywriter, has been the recipient of a radio advertising award, and in 2001 won the Keats-Shelley Memorial Prize (both possibly due to typing errors).

His first novel (for Abaddon) was The Viking Dead – a historical-zombie-SF mashup which has been described as "A fantastic mix of history, violence and horror" and "ludicrous fun". He is also author of the Hunter of Sherwood trilogy in which Guy of Gisburne is the hero, and Hood a bit of a rotter. These novels have garnered some charitable reviews, including one which essentially implied the author was the bastard son of Bernard Cornwell. Which was nice.

Guy of Gisburne by Toby Venables

England, 1191. Richard Lionheart has left the realm bankrupt and leaderless in his quest for glory. Only Prince John seems willing to fight back the tide of chaos threatening England – embodied by the traitorous 'Hood.'

But John has a secret weapon: Guy of Gisburne, outcast, mercenary, and now knight. From intercepting the jewel-encrusted skull of John the Baptist to investigating a string of grisly deaths linked to the Prince's own past, Guy is John's hound, combating chaos and fighting the enemies of England wherever they may be found.

From Ireland to Marseilles and as far as the Levant, aided by his faithful squire Galfrid and the beautiful and secretive Mélisande, Gisburne battles his way with sword, lance and bow in England's name, drawing ever nearer the day he will have to confront his oldest and greatest foe...

The Tower of London

THE GAUNT EDIFICE of the Conqueror's great keep stood skull-white against the dark winter sky. He could see it more clearly now, illuminated by the cold light of the waxing, three-quarter moon. Crouched low in the small, blunt-ended craft, he stilled the oar and allowed the boat to drift for a moment on the icy, ink-black flow of the evening tide. Drops of freezing water flicked his face as, with numb fingers, he hauled the oar aboard. In the near-impenetrable dark of the boat's interior, the damp, heavy wood jarred noisily against the thwart. He uttered a curse, his eyes darting to the shoreline. No movement; just the shifting, black mirror of the water, his own foggy breaths and the powdery swirl of fine snow that blew about him, its dusty specks glinting coldly in the moonlight – colourless ghosts of the sunlit motes of summer.

In the past hour, the sky had cleared to reveal a starlit canopy. It would get colder yet. His curious garb gave back almost no light – rendered him little more than shadow – yet he had hoped the moon would maintain its shroud a little longer to better mask what lay ahead. There would be no more snow, at least, and only the foolish or desperate would venture out on such a bitter night (he laughed to himself – which was he?). He had seen a few lingerers, further upriver: London's lost and helpless, or those hurrying to finish their day and reach their hearths – if hearths they had. But here, there was no life at all. Spitting length to his left, on the northern shore, a jagged fringe of dirty ice edged the lapping water, giving way to a pitch-black inlet. A blunt spur of water that thrust a full furlong into the land, but only upon the west side; the failed attempt at a moat, over which – though he could not yet see it – stood the stone bridge that led to the Tower's gatehouse.

Beyond it, where the bank resumed, the cold, curved stonework of the Bell Tower marked the southwest corner of the new outer walls that rose up from the riverbank ahead. On the bank, patches of virgin snow sparkled in the dim light like ground glass. No foot trod here – human or animal. There were not even the forked marks of birds.

He knew there should be guards upon the new battlements, but he also knew that they relied on precisely this assumption. In reality, night patrols of the riverside curtain wall were lax and erratic – especially after midnight, and all the more so since the dramatic siege of the past month. But now, the Most Hated Man In England having been ignominiously ejected, the crisis was thought to be past. The decimated Tower guards – stretched beyond the limit of their capabilities, but not dreaming of further assault upon the most secure place in England – were weakened, disorganised and complacent, a fatal combination. And while its thick walls and iron-strapped doors afforded prisoners no chance of escape, information, he had discovered, was not so easily contained. He knew, for example, that the nearest guard would not be on the parapet at all, but in the octagonal Bell Tower on the new outer wall's southwest corner, partly the worse for drink, and clinging to a brazier. They did not expect trouble. They could not even imagine what kind of trouble could threaten them. They did not expect him.

He turned his attention back to the grim turrets and stern, square walls of the White Tower, thrusting above the castle's new ramparts like cliffs of ice. It would be a different story there.

The great keep was visible all over London. By day, its whitewashed exterior shone blindingly over the mud and squalour of the city. By night, it loomed like an ominous phantom rising from the darkness of the boneyard. Everpresent, watching, warning. That had been its purpose from the start. This was no cathedral to inspire men to great deeds. It was a demonstration to all, of the Norman invader's fierce dominance over his newly conquered capital.

He had been dead a century, but, by accident or design, the White Tower had captured in stone many of that king's own qualities. It was implacable, grim – even brutal. It had sophistication of mind in its features, but little time for delicacy. It did not seek to hide its purpose. Even in its stark, simple beauty – the unfussy, towering pilasters, the simple, arched and slotted windows – it was practical, stern, plain. It did not do anything by half measures. Its stout stone walls – entirely square, entirely vertical – stood almost a hundred feet high, and were fifteen feet thick at the base.

Turning from the Tower's grim face, then, he took up the oar and let his eyes scan the gloomy, lifeless shores once more, glancing back briefly at the dark bundle of equipment in the boat – the crossbow, the thin rope, the slender steel grapple, its metal entirely sheathed in delicately stitched brown leather. The preparations had been thorough. But as he drew silently closer, the oar dipping in the near-frozen swell of the Thames, he watched the task grow more formidable before his eyes.

It was a calculated effect. The Tower was not only built to withstand brute force, but to crush and wither resistance before it even began; to inspire awe in the hearts of all who stood for the King, and sap the will of those who would stand against him. And this, he knew, was no empty threat. Its reputation went before it. A supreme symbol of royal power and military might, long envied across all Christendom, its walls had never been breached.