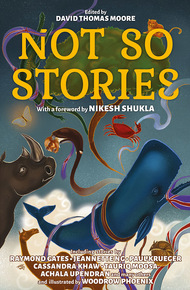 Born in Australia, David Thomas Moore has lived and worked in the UK since the mid-nineties, and has been writing for roleplaying magazines, fiction websites and short story anthologies for around the same time. He lives in Reading with his wife Tamsin and daughter Beatrix. You're glad you met him.

Not So Stories edited by David Thomas Moore

Once upon a time, Rudyard Kipling's Just So Stories—fantastical yarns of wondrous creatures in faraway places—bewitched children across the world. But times change. Today, Kipling's writing tells us a different tale; of a love of Empire, and the troubling legacy of British colonialism.

In Not So Stories, writers of colour from around the world reclaim these stories and remake them into something new. Something different. Something that belongs to us all.

"Tiger," Spider said one day, inching through the ferns to Tiger's lair, where the smell of carrion sat like a coin on the tongue. "Tiger, you must tell me. How did you become so deadly?"

The feline yawned, his tongue lolling free, and he laughed in a voice that made Spider think of the monsoon. "I was born this way, littlest of sisters. When I opened my eyes, I found teeth in my mouth, claws in my paws, muscles that rippled and heaved beneath my fur like the deepest waters of the sea. I was born a predator. There was no method to it, no effort. It is my gift and my privilege and my joy. But tell me, why do you ask?"

"No reason," Spider said carefully. Their friendship was purely circumstantial. Spider was too small, too bitter to appeal to Tiger's palate, the crunch of her exoskeleton displeasing between his teeth. But that did not mean he could not gobble her down. "Well. One reason."

"Oh?" said Tiger. Like all cats, he was very curious.

The trees shook with his mirth. Birds poured from the foliage, abandoning their nests, and the air teemed with bright, desperate colours. Tiger slapped a Parrot from its flock, pinned its body beneath his massive paw. "You would have your children contest mine for territory?"

There was the crack of small bones parting under a tremendous weight.

Spider continued: "I am not a fool. I know that the jungles belong to you. I know that the trees are bloody from the war between Jaguar and Leopard. I know the savannah is the property of Lion, and that the bones of your kills have been tithed to Hyena, their entrails to Vulture. Neither I nor my children would dare impose."

With her one sleek leg, Spider drew her body closer to Tiger's perch. The sunlight broke in her eyes, so that for a moment, Best Beloved, it looked like she'd stolen the stars for her own edification.

"But we would like to be more appealing sport, Tiger."

"Oh?" said Tiger again as he suckled on the ribs of the Parrot.

Spider saw her opening, but she was wise, Best Beloved, as all small and helpless things must be. Because of that, she did not smile. Instead, Spider husked her voice and crooned. "Yes, Tiger, O Wisest of Cats, Best Adored of Predators, Most Beautiful. What joy is there in life when one cannot provide entertainment for their betters? If we were quicker, we'd be more pleasing to hunt. But now—"

She wiggled her solitary leg in clear disappointment.

"—we are no more interesting than fruit."

Tiger considered her argument in silence, tail twining around his branch. He sighed and feathers tumbled from between his teeth, his chin daubed with vermilion.

"But you are no prey of mine, Spider."

Of all the creatures in the jungles and the savannah, the air and the water, the pastures and the graveyards of things small and big, Tiger loved but one: himself and none other. Not even his children—who, in turn, adored only themselves. You must understand, Best Beloved, that this is not meant as reproach. Cats are their own masters, will only ever listen to the whim of their blood, their own fickle desire.

"No. But you are partial to the taste of Coatimundi, fond of Macaw's sweetness, and always so complimentary about the way Shrew serves perfectly as an appetizer. What a feast Monkey would be if only he was more muscled, more sleek! Can you imagine, Tiger? Can you imagine how savoury he would be?" Spider clacked her mandibles in satisfaction. "All because of me and mine."

"That," purred Tiger, "would not be displeasing."

He uncoiled then from his branch and leapt onto the soil, silent despite his great size. Tiger, Best Beloved, was so fearsome that not even the air dared to speak of him, or whisper of his passing. Nevertheless, Spider persisted.

"How would you accomplish this, littlest of my sisters, Mother of They who Nourish Monkey and Macaw?" Tiger cocked his massive head. "And what would you ask of me to fulfil this strange need of yours?"

"The stripes in your ruff, Tiger," said Spider. "Those tiny lines of shadow, like the silhouettes of ferns and small wildflowers. I'd fashion them into legs for my children and me."

In those days, O Best Beloved, before Man knew to dream of cities, when the skin between worlds was thin enough that you could look into death and converse with those who came before you, Tiger had far more stripes than he did today. I am sure you can see where this story is leading, but be patient, Beloved. A denouement is nothing without its narrative.

"And how many would you need?"

"Seven," said Spider. She had considered this carefully. Two were ideal for those who travelled great distances, and four was the number preferred by beasts that hunt, like Tiger and Crocodile. Briefly, she'd flirted with the thought of forty, but her body was too small to accommodate such numbers.

Though he was too dignified to tell her so, Tiger found the entire premise laughable. Eight legs, indeed. But the ludicrousness was, in part, what led Tiger to consenting to Spider's request. If she failed at transforming her kin into more enticing prey, he would at least have the pleasure of laughing at her foolishness.

So Tiger lowered his head, and allowed sly Spider to harvest his stripes.

That night, Spider returned to the home she'd made in an enormous banyan, its roots burrowed through the husk of his host. The leaves were pearled with eggs, milk-grey and splendid. Those of her children who were old enough to do so attended to their unborn siblings without complaint, all the while mulling the mathematics of the zephyrs, the geometry of perfect corners.

"Children of mine, come close," Spider chittered. "I have presents."

They swarmed from the stones, the cracks in the branches, the curling stamens of the hibiscus, the orchids, the black violas. Mother, mother, mother, they hummed, their eyes glowing like moons. What have you brought us, mother?

It was then and only then that Spider allowed herself a smile. Under the eyes of her young, Spider, the first of her species, wove Tiger's stripes into bladed filaments, into muscular limbs furred like a bumblebee's belly, into a hundred thousand variations—whatever her children might desire. And by the last of that night, when the indigo had seeped between the mountains, all of Spider's children, Best Beloved, were as you know them now.

That is, however, not the end of this story.