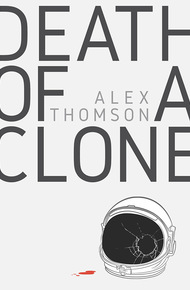 Alex Thomson has worked in the publishing industry for the last twelve years, selling translation rights for children's books, gardening books, yoga books, crystal books, cookery books, and lately sci-fi and fantasy books. He wrote Death of a Clone on the train during his daily commute to London, scribbling away in biro in a notebook, surrounded by sweaty commuters. He has two small and lively boys, which explains why trying to write at home was not always a realistic option. His short fiction has been published in the Nocturne anthologies. When not writing, he can be found whiling away the hours in board game cafés or playing the bongos.

Death of a Clone by Alex Thomson

The Overseers may call it Hell, but for Leila and the other clones, the mining base on asteroid Mizushima-00109 is the only home they've ever known. But then Leila's sister Lily is murdered, and the Overseers seem less interested in solving the crime than in making their mining quota and returning to Earth.

Leila decides to find the murderer, just like the heroes of her old detective novels would. But Hell is a place of terrible secrets, and courage and determination—and a love of mysteries—may not be enough to keep Leila from ending up like her sister.

I AM SHARING a jeep with Brenda, Bess, Juan and Jolly; one of the two Jays—not sure which—is driving. It is the yellow jeep, nicknamed Banana. We are on our way to East 3, a sector with a high concentration of tunnels and mineshafts, in the process of being bled dry of all its metals. The ground is uneven, and my head bounces and judders in time with the bumps. We are all in our suits, scratched and dirty, but lightweight and easy to move around in. Our heads are covered by a hood that connects to the suit, with a plastic visor for us to look out. We are squeezed together in the back, and I can feel Juan or Jolly next to me, his hip pressed against mine.

The Jays are small, but tough and wiry—though in their suits they just look small. I once read the phrase 'tough as old boots,' and I thought that fitted them perfectly—with their black leathery skin, and the sense they could bend and bend, but would never snap. If, for some reason, we had a civil war on Hell, I can't help feeling the Jays would be the last ones standing.

There's a crackle, and Juan or Jolly, whichever is next to me, speaks into my channel. We are inches apart but he doesn't even incline his head towards me as he speaks, which is just the kind of annoying but faintly amusing thing the Jays do all the time.

"Leila. Hello. This is the first time in… twenty-eight cycles that we've shared a work shift," he says, his voice blurred by hissing and static. Bess, on his other side, glances at him: she can see he's speaking but unable to hear him.

"The Rota archive," he says, in the clipped staccato the Jays always use. "It was barely five minutes' work to find out."

I hear the ghost of a smile through the static. "No point. Just observing. I've seen your sister on several occasions recently, but not you."

"Who are you, anyway? Juan or Jolly?"

"What makes you assume we're Juan and Jolly?" cuts in the same voice, but with slightly different interference, and I'm annoyed to realise the second Jay has been listening on the channel.

"You're both down on the Rota for this shift," I say. "And shouldn't you be focussing on driving?"

"Pfft," says a Jay, I've lost track which now. "The Rota. What makes you think we follow the Rota?"

"The Overseers haven't checked our brands for a long time," says a Jay, and the other responds with a raspy laugh.

THE FUNDAMENTAL PROBLEM with the Jays is that they lack an Overseer to manage them. Overseer Fedorchuk came down to Hell with them, and named them—he died a long time ago. None of us can remember what he looked like or how he died, and the other Overseers won't talk about him. It must have been soon after our arrival for it to be so shrouded in mystery. But regardless, none of the three Overseers has yet taken responsibility for them. Mr Ortiz is in charge of the Ays, Mr Reynolds the Bees—really it should be Mr Lee, with his two sole charges, but he has so far managed to avoid that conversation.

As a result, provided the Jays do their job and don't cause too much disruption, they have license to run riot. The only way to distinguish them is with knowledge of the Rota, and the assumption they are following it. Sometimes I'm certain they are deliberately clouding their identities—just for the fun of it, I assume; I can never see much purpose—but short of ripping off their clothes and examining their brands, there's no way to prove anything.

The Jays' great passion is chess. One of the items sent down for Leisure was a single miniature chessboard, with plastic black and white pieces. A white rook is long lost and has been replaced with a drill bit. They run a simple system—whichever Jay is in possession of the board, keeps it until another Jay beats him. In the event of a stalemate, the holder keeps the board—and needless to say, between identical brothers, there are a lot of stalemates. So to wrest the board away from his brother, a Jay has to become more and more aggressive, take uncharacteristic risks. And the longer a Jay can hold on to the board, the more he can crow over his brothers.

Do they (could they) ever deceive each other? Swap identities mid-game? Would it make any difference? A few times, I have sat down to watch a game—two mirror images, hunched over the tiny board, both staring at it without the slightest movement. Once, it was Jupiter and Juan playing, I must have sat there for over twenty minutes while Jupiter decided on his move—the result was a pawn, moving forward one square. I could swear the two of them were deliberately slowing down their play, for their own amusement.

I CLEAR THE trailer of debris, and lug it over by its rope to the jeep. The two Jays have already disappeared into a mineshaft, where their heavy-duty machinery is found, and the Bees are listening to Mr Reynolds, who is pointing towards the top of a ridge. It's their role to do their tests and predict where the rich seams of metal are going to be found—to map out the whole asteroid while we do our best to take it apart.

A small mountain of jet-black ore—'swag,' as our little community likes to dub it—is waiting for me at the mineshaft entrance. I lean down and take a piece in my gloves, rubbing my fingers against the gritty texture. Then I pick up a shovel, and start to load the rocks into the trailer. Soon I am in a rhythm, a mindless repetition of digging and chucking, digging and chucking. There is no sound in the vacuum around me, but my imagination fills in the clatter the rocks ought to be making as they land in the trailer.

After some time, Andrew crawls out the mineshaft, dragging another load behind him on a tarpaulin. His suit is streaked with black. He must be exhausted, but he picks up a shovel and starts helping me to load up.

We are nearing the end of the pile of swag when he turns to me and speaks on my channel. "You know, you need to have a word with your sister," he says.

"Yeah. My brothers aren't happy. She keeps sticking her nose into our business."

He shakes his giant hooded head. "Questions, questions, too many damn questions. Just tell her to back off."

"I have no idea what you're talking about."

He lifts an enormous rock with his shovel, and hurls it into the trailer. "Speak with her."

Then he stomps off and ducks his head back into the mineshaft.