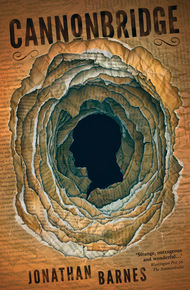 Jonathan Barnes is the author of two novels, The Somnambulist and The Domino Men. He contributes regularly to the Times Literary Supplement and the Literary Review and is the author of several scripts for Big Finish Productions. He is currently writer-in-residence at Kingston University.

Flamboyant Matthew Cannonbridge was touched by genius, the most influential mind of the 19th century, a novelist, playwright, the poet of his generation. The only problem is, he should never have existed, and recently divorced 21st century don Toby Judd is the only person to realise something is wrong with history.

Cannonbridge was everywhere: he was by Lake Geneva when talk between Byron, Shelley and Mary Godwin turned to the supernatural; he was friend to the young Dickens as he laboured in the blacking factory; he was the only man of note to visit Wilde in prison. His extraordinary life spanned a century. But as the world prepares to toast the bicentenary of Cannonbridge's most celebrated work, Judd's discovery leads him on a breakneck chase across the English canon and countryside, to the realisation that the spectre of Matthew Cannonbridge, planted so seamlessly into the heart of the 19th century, might not be so dead and buried after all...

"Tell me," he urges. "What troubles you? Was it something about our game?"

"I simply believe that the telling of tales should not be a game."

"You understand that I meant only to provide us with a little amusement?"

"Yes. But then all the world is a joke to you."

The lord gives no sign that he disagrees with her judgement. "Do you not believe it to be so?"

"I can see how you might form such an opinion."

"You choose your words with care, I think. Extrapolate."

They walk through the theatre, into a library, an antechamber and out into the main corridor of the house. In the distance: the outer door, heavy and fortified.

The woman's words are hurried, as though the swift speaking of them may serve to hide their meaning. "Your position, my lord. Your power. And, above all, your money. These things protect you from the truth of the world."

The man does not reply but merely steps rather clumsily onwards, as though concentrating now to the exclusion of all else upon the feat of forward motion.

At last, they reach the door. Although they have heard no further knocks—and for all that they know the visitor may have departed—both can sense the presence of something that does not truly belong on the other side, something waiting which ought not to be there at all. As they open the house to the storm, the woman and the lord dare not look at one another.

Outside, drenched and framed by the glowering sky, his arrival heralded by another clap of thunder, stands a stranger. Black-clad, dark-haired, his face lean and intelligent, his eyes a penetrating shade of blue, he seems almost to have been brought to this place by the storm itself. Although kindly in his manner there is even now, even at this, the earliest of all known phases, something about him—some dormancy, some potential—which makes the couple step, instinctively, half a pace backwards.

In spite of the tempest, the stranger smiles. "I was expecting servants."

"The servants have fled, sir. Appalled, they said, at our depravity."

The stranger's smile does not falter. "You must be Lord Byron."

The object of this observation nods crisply.

"Not yet, I fear. And I hope that you'll forgive me for arriving unannounced and without an introduction."

"What do you want?" asks the lord.

"Only shelter. For tonight. Nothing more. Shelter from the storm. And perhaps a little company. I can recompense you handsomely for both."

"I did not speak of money."

"I have heard (I cannot at present recollect where or from whom) that tonight you tell tales. Stories meant to curdle the blood and to quicken the beatings of the heart."

Byron inclines his head. If he is surprised, he takes pains not to disclose it. "That is so."

"Then I've come to help. To contribute, if I can."

"As chance would have it, I know just such a story—the most terrible, and I would warrant, the most chilling of them all."

He smiles again and this time neither of them can resist the force of it.

The stranger, soaked yet resolute: "My lord, the storm is quite unrelenting."

"Then come in," says Byron and how odd it is, how very odd, to hear that curious note of deference in his voice. "And be right welcome."

"Forgive me," says the girl, "but I did not hear your name."

"I did not give it." The stranger glances behind him, somewhat nervous all of a sudden, as though he suspects himself to have been followed, as though some shadow dogs him. But, almost at once, uncertainty fades and the smile comes again. "My name is Cannonbridge. It is Matthew Cannonbridge."

"Then pray come in, Mr Cannonbridge."

And the dark-haired man, invited, steps inside.

For a long time to come, Mary will tell herself that it was all coincidence—how lightning struck close by at the very moment when the stranger crossed the threshold, how in that instant she should herself have felt a tremor in her heart as if she were suddenly unwell and how (and this, she will tell herself over and over, must surely have been her imagination) she seemed to hear, quite distinctly, though she knows it to be impossible, the infant having died some fifteen months beforehand, the desperate, mournful weeping of her child.