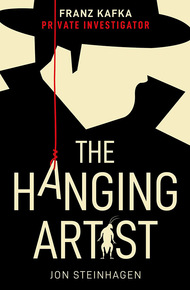 Jon Steinhagen lives in what is known (somewhat affectionately) as The Chicagoland Area, near the historic Brookfield Zoo. His writing career began in theatre, first as a composer and lyricist for several musicals (particularly Inferno Beach, The Teapot Scandals, The Next Thing, and The Arresting Dilemma of Mr. K, a musical adaptation of Kafka's The Trial), then as resident playwright at Chicago Dramatists (his notable plays include The Analytical Engine, ACES, Successors, Devil's Day Off, and Blizzard '67). As a screenwriter, he has written Party Favors, and is developing two television series, Willing Spirit and New Kid. Somewhere along the way he began writing stories, too, and many are collected in The Big Book of Sounds (Black Lawrence Press). He has received numerous Joseph Jefferson Awards for his work in Chicago theatre as either author, actor, or musical director, and can be found on twitter as @JonSteinhagen (inventive fellow, this Jon Steinhagen), where he can be found blathering on about his ridiculous ideas for movies, his collection of vinyl records, and his desire for cookies to be delivered every time he does something he should have done weeks ago.

The Hanging Artist by Jon Steinhagen

"Trust me," the insect repeated. Franz did not.

What if Franz Kafka did not succumb to tuberculosis at the age of 40? What if he awoke the day after his supposed death to find himself attended by the giant insect he once imagined in his own story The Metamorphosis?

And what if he were recruited by a mysterious agency to investigate a rash of bizarre, mysterious murders plaguing 1924 Vienna? Murders that are possibly connected to an equally mysterious performer who commits suicide every night at the music hall (but cannot be connected to any crimes)?

The Hanging Artist leads the newly rehabilitated Franz Kafka on an absurdist round of discoveries, the solution of which is more fantastical than anything he imagined.

FRANZ KAFKA AWOKE one morning from unpleasant dreams, to find himself face to face with an enormous insect that was attempting to take his temperature; the insect, however—either confused as into which end the thermometer was to go or set upon giving Franz an abrupt and rude awakening—had the thermometer nowhere near Franz's mouth.

Franz recoiled, and was surprised to find he had the strength to recoil. When last he checked—the night before?—he had been too weak to do anything except close his eyes in what he thought would be his final slumber, but here he was, awake and recoiling from the insect with the thermometer.

Franz took in the insect's domed brown belly, divided into stiff arched segments; and its numerous legs, pitifully thin compared to the rest of its bulk, which moved in various unsettling directions all at once. At the moment, one leg wielded the dreaded baton-sized thermometer while two others poured water from a battered ewer into a glass tumbler.

"I'll forgive you so long as you change the destination of that thermometer," Franz said.

Said. He hadn't croaked, he'd said. His clear voice surprised him more than the fact that the giant insect tending to him also possessed the power of speech.

Franz assumed he was deep in a dream, although it was unlike any of the dreams he'd endured his forty years of life: bright, sunny, calm, and courteous. He ruled out 'dream' and tried to adjust his thinking to reality.

The room, a regular human room, only rather too small, sat in stillness between four antiseptic walls. Beyond the bed was a spindly chair meant for visitors and a shabby wardrobe missing its knobs. Next to Franz was the bedside table, to the surface of which a small electric lamp had been screwed. The lamp and the table stood in front of the room's sole window, its shadeless panes clear and giving onto a view of—where?

"You're still in the sanitarium," the insect said, offering Franz the water. Franz, reacting from instinct, grimaced and turned away before it could touch his lips. "You must be thirsty," the insect said. "Drink."

The insect's voice was soft and unrefined, crude but not unpleasant, like velvet gravel running down a sluice. Its head was a brown sphere of exaggerations: shiny black eyes the size of dinner plates and a mouth resembling a complicated gardening tool, which made scissoring motions when it spoke.

"You can manage this now," the insect said, pressing the water upon on him. "Trust me."

Franz nearly trusted the thing, but aggressive memories of pain kept him from taking the water. His throat was raw and dry, a convulsive hell useful only for producing spasms of red hot knives followed by blood, neither of which could be considered joyful.

"Trust me," the insect repeated.