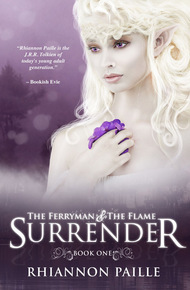 Rhiannon is a booksmith from the North, telling her fantastical tales to unsuspecting folk on mountains, in valleys and mostly in cities around the world. She holds a PhD in Metaphysical Science and Parapsychology, which is to say she happens to know a lot about what goes bump in the night. When she's not writing she's singing karaoke, burning dinner, and hiding her superhero identity. She'd like to own a unicorn one day, as long as it doesn't eat her. You'll find her sipping iced cappuccino despite her allergy to coffee at yafantasyauthor.com.

How far would you go to save everything you ever loved?

Kaliel was warned about her love for the Ferryman. One day he will marry the land and leave Avristar forever. She doesn't listen, and because of what she is—a Flame—one of nine apocalyptic weapons, she sparks a war. In a desperate attempt to save her home and her love, Kaliel tries to awaken Avred, not knowing she may have to make the ultimate sacrifice.

Nothing was ever really perfect.

Kemplan dangled from a rung on the ladder, high in the skies of the library. Stacks upon stacks of books stuffed into shelves in any manner lay around him. He scanned the worn etchings of symbols in search of the book he needed.

The one about the Ferryman and the Flame, their original disastrous end. Specifically it was named after her, the Flame, but the book chronicled the chaos, burning, suffering. Nothing from that time survived. All of it combusted, life splattered into stars and patterns of spilled milk on an endless black sky.

Kemplan was supposed to burn it.

Of all the methods of destroying information, the only way to cleanse anything from the Great Library for certain was to burn it. The parchment should have burned, but its vile message refused to be snuffed from existence. It was destined to live on, continually threatening the very miracle of life hanging by threads.

Kemplan moved his hand over the spines, some of them detaching from the covers. His fingers splayed across a damaged book and when he removed his hand the spine fell into the abyss below him. The fireplace was so far away. All he had were thin ribbons of light from an artificial sun hanging over him.

He glanced at the book with the missing spine and pulled it off the shelf. He would have to mend it. There was needle and thread in a box under his leather chair. That would do the trick, stitch it up and all would be fine.

He turned the book over in his hands carefully, trying not to drop the front or back cover. He ran a finger through the dust and gasped. His foot faltered, he tripped and fell into the shadows, the book falling above him. It quickened past him and slammed on the floor. He cursed under his breath and waited for the collision. The fall shook his feeble body hard. He blinked and waited for his nerves to begin firing.

He was used to this incessant immortality, no fear of death, but longing for it. Time had passed in sparks since Tor ordered him to destroy the books about the Flames.

He found every single one of them save for the last. He coughed and rolled onto his side, the book beside him pristine, no further damage. He rummaged for the spine and found it. Stretching across the creaky worn floorboards he pulled himself to his knees. Flickering light from somewhere unknown flashed across the cover of the book.

He recognized the title.

It was another name he never wanted to hear again. Of the eleven Lords and Ladies of the Valtanyana, Cassareece was the one obsessed with the pursuit of perfection. He didn’t need to open the book to know the tale, it was still told to little elven children on Nazole and Talanisdir.

Cassareece was a vain woman with an obsessive heart. She wanted perfection, assassinated what was imperfect, and fought to perfect what was hopeless.

Sometimes an act of sainthood isn’t saintly at all, and soon Cassareece and her fetishes for pretty clothes, endless summers and beautiful architecture caught up with her. The people lashed out. No matter how much they slaved over her need for perfection, nothing was ever good enough.

Cassareece hunted them, ended their lives with her bare hands, silenced their cries with her own. She left their rotting carcasses to bleed in the streets of her peaceful kingdom.

Kemplan waddled over to the end table next to the leather chair and set the book on it. He wanted to burn it, but it wasn’t about the Flames. He settled into the chair and glanced at the salamanders. Their shapes flashed fast and furious, like fish jumping out of water, their sheer glittery scales caught by the glint of sunlight for a second before they splashed back into the pond. He picked up the needle and thread from the box under his chair, and began stitching the book together.

Cassareece wasn’t the worst of the Valtanyana, but she was deadly in her own way. He glanced at the high ceiling of the library, his thoughts still circling around the last book about the Flames, about her, The Amethyst Flame.