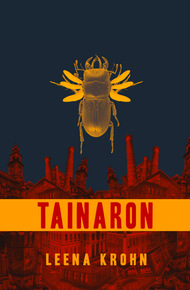 The classic novel by an iconic Finnish author, a finalist for the World Fantasy Award. Tainaron: a city like no other, populated by talking insects, as observed by the nameless narrator, who is far from home... Tainaron consists of a series of letters sent beyond the sea from a city of insects. Tainaron is a book of changes. It speaks of metamorphoses that test all of nature from a flea to a star, from stone and grass to a human. The same irresistible force that gives us birth, also kills us. Nominated for the prestigious Finlandia prize and the World Fantasy Award, this is the perfect introduction to the work of a modern fabulist.

THE MEADOW AND THE HONEY PATTERN

How could I forget the spring when we walked in the University's botanical gardens; for there is such a park here in Tainaron, too, large and carefully tended. If you saw it you would be astonished, for it contains many plants that no one at home knows; even a species that flowers underground.

But most of all I like the meadow attached to the gardens, where only wild flowers grow: cornflower, cotton thistle, toadflax, spiked speedwell. But you would be wrong if you supposed them to be ordinary flowers of the field. No, they are some kind of hybrid, supernaturally large. Many of the knapweeds are as tall as a man, and their corollas are as broad as a human face; but I have also seen flowers into which one can step as if into a sunny bower.

It gives me pleasure to imagine that I might one day take you there, beneath the thistles. Their lovely corymbs are veiled by a downy web, which floats high above like the crowns of trees on a beach promenade.

You would enjoy a visit to the meadow, for in Tainaron it is summer and one can look at the flowers face to face. They are as open as the day itself and the hieroglyphs of the honey-patterns are precise and clear. We gaze at them, but they gaze only

at the sun, which they resemble. It is so difficult to believe, in the warmth of the day's heart—just as difficult as before the face of children—that the colour and light of which they are made are matter, and that some time, soon, this very night, their dazzle will be extinguished and will no longer be visible.

Much happens in the meadow; it is a stage for fervent activity and a theatre of war. But everything serves just one purpose: immortality. The insects who are pursuing their own interests there do not know that they are at the same time fulfilling the flowers' hidden desires, any more than the flowers understand that to the insects, whom they consider their slaves, they are life and livelihood. Thus the selfishness of each individual works, in the meadow, for the happiness of all.

But it is not only the ordinary hover-flies and sawflies that come to the meadow of the botanical gardens to amuse themselves: the idle cityfolk spend their free moments here, whiling away their time in a way that is undeniably strange to us.

‘Admiral! Admiral!' I heard Longhorn shout delightedly one Sunday, when once again we were wandering along the paths that criss-cross the meadow.

I looked around me past the flower-stalks—some of them were as strong as the trunks of young birch trees—but I could not see whom Longhorn had been talking to until he pointed to the corolla of an orchid-like flower. On its brilliantly red, slightly mottled lips there sat—or rather, skipped about on the spot—someone who seemed very anxious and very happy.

This Tainaronian waved all his legs at Longhorn, and began to whine earnestly: ‘This way, ladies and gentlemen, please don't be shy!'

I must admit that his behaviour bewildered me, for he went on with his unsteady dance, bouncing from one petal to another and from time to time rubbing his backside against it. All of a sudden he dropped limply flat on his face and seemed to chew enthusiastically on the fine, downy fluff that straggled around the base of the lip. Well, we were in a public place, and I turned my face away from such debauchery.

But Longhorn peeped at my face and began to smile; and that only made me more angry.

‘What a puritan!' he said. ‘You disapprove of lonely people's most innocent and cheapest weekend amusements? They make love to the flowers and the flowers make them drunk; they go from flower to flower and at the same time pollinate them; is that not beneficial to the entire meadow, the entire city?'

At that very moment Longhorn's friend leaned over toward us from the broad, generously curving lip of the orchid, which swayed and rocked violently beneath him. Now I could see that he was stained from head to foot with sticky pollen, and when I looked upward, shading my eyes from the sun, a sweet droplet trickled from his long, fumbling proboscis and on to my lips. I licked it away; it was not unpleasant, but at the same time I remembered some lines I had read long ago.

Appeased, I would have liked to have recited them at once to Longhorn, but his friend was now speaking incessantly.

‘My dear friends,' the Admiral stammered, ‘I wager you have never seen nectaries like these, aaaah, follow me, quickly, I know the way . . . '

And with that he disappeared into the depths of the huge corolla, so that I could make out only one of his hind legs, wriggling deep in the quivering cavity.

‘Well then,' said Longhorn amicably, ‘let us continue on our way. Perhaps I may introduce you some other time. Let us continue now, and see whether the meadowsweet has flowered.'

As we wandered beneath the flowers, I knew their desire and their thirst, knew that what was visible of them, all their finery, was merely a stepping-stone for their seed. And I could not stop myself from teasing Longhorn by reciting the lines that the foolish Admiral had just recalled to my mind:

For what are anthers worth or petals

Of the heart of the flower, the central flame!

He seemed absent-minded as he listened, and finally he interrupted me.

Quite right, I thought I could distinguish a desperate howling that came from the south, from the other side of the field. This was what Longhorn had been listening for, throughout my recitation.

We had turned in the right direction, for we did not have far to go before we heard an anxious voice panting, ‘I'm here, here!', and we saw, once more, a flower as big as a room, this time a glowing ultramarine, where a little mannikin was struggling, apparently stuck in its funnel-like stigma.

‘Well, well,' said Longhorn, glumly, ‘this is just what I expected. This is a vincetoxicum, a fly-trap.'

And he directed his words to the ensnared creature: ‘You are not the first to have met this fate.'

And Longhorn climbed nimbly into the sparkling blue corolla, leaning on the axils of the stem. Without delay and briskly he grasped the victim beneath the arms. Hup!—and at the same moment there was a hissing sound like silk tearing, the corolla sagged downward, and both the helper and the flower's prisoner rolled on to the lawn.

But before I could reach them under the broken herb, both had risen to their feet and were brushing pollen off themselves, so that the air was dusty with a glittering haze.

‘But you are limping,' said Longhorn sternly to the shy creature he had saved.

‘Just a little accident,' said the luckless one, glancing at the ravaged plant as if a sudden attack could still be expected. ‘There was some kind of trap in there . . . '

‘Never trust a flower,' Longhorn advised. ‘Next time, think where you put your head.'

I do not believe that the flower's victim intended ever to return to the meadow. He was already limping off under equally treacherous plants, and had forgotten to say thank you. Longhorn linked arms with me, and I was grateful, for I felt I needed support, as if it had been me who had suffered in the prison of the vincetoxicum.

The meadow murmured around us as I thought, and its scents began to make both of us feel faint. We walked under a cloud of meadowsweet—they were indeed in full flower—but at that moment I would rather have been walking on regular, hard, reliable paving stones.

But before me there constantly rose new eddies, glowing with light, strange, incomprehensible in their silence. I saw the silky glimmer of the flowers, their wings and carinas, I saw their dull down and their purple lustre and their seeds, which a gust of wind hurled from their tight capsules. Ouch! One of them hit my cheek, hurting me; it was as big as a cartridge, while others popped as they opened so that I jumped into the air. I heard thuds as nutlets fell from their open hulls, and sulphur-yellow spurs and swollen lips barred my way. My neck was tickled by the fleecy tips of bracts, bristles and seed-down, and the searing colours forced their way in through my pupils, however much they tried to shrink, and into my nostrils, palate, ears the cries of the honey-pattern and thousands of impudent scents.

‘No, we do not know them,' I said to Longhorn, and he inclined his head silently.

Across the ground, which hid all the roots, the cold of the approaching evening began to move. While the sun still blazed on those large faces, which were now closing, I had not doubted or asked. But as soon as the first pale portent of withering rose toward the sky and we turned toward the city, all I knew with certainty was that I was as lost as I had been before.