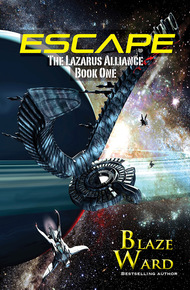 Escape - The Lazarus Alliance: Book One by Blaze Ward

When enemies ambush Lazarus, he must flee in his new, experimental warship, then destroy it before they can learn his secrets.

Aiming the ship on a self-destruct course, both he and the ship accidently survive.

As well as stumble across a new alien realm that nobody knew existed.

Alone and bereft, Lazarus must find a way to survive in this foreign empire, make friends, and then find a way home.

The beginning of a new epic space opera series pitting all sides and dozens of alien species in a new war for the future of the entire galaxy.

The Lazarus Alliance, book one.

It was an old human adage, dating back well before men ever took to the skies, let alone space: A captain goes down with his ship. Especially an experimental warship design like Ajax, pushing the envelope of science every direction, almost into the realm of magic.

Alone, this one starcruiser should have been able to take on an entire Patrol of Westphalian Phalanx vessels: four Phalanxes and an Archer, with a reasonable chance of success. Unfortunately, they'd blundered into a full GunWall while during this shakedown cruise: sixteen Phalanxes, four Archers, and a CommandWall.

And still given better than they got, but it hadn't been enough.

He would have coughed as he looked around the smoke-filled bridge and considered his impending death, but the vacuum suit he wore kept everything clean and crisp, in spite of the death and mayhem that had occurred around him. The last of his surviving crew were finally blasting their way clear in the escape pods. He had remained behind to contemplate his failure. Standing orders called for him to arm the scuttling charges right now and blow himself and his final command to kingdom come, however he knew doubt.

That a Westphalian scientist would somehow be able to piece together enough of the wreckage to understand what he and his team had managed here. That they might manage to build their own version of Kirov's Lance, a weapon as much superior to the standard Star Lance as that beam was to the much smaller Star Spear. Worse, Westphalia would use such a weapon, perhaps such a ship to conquer the rest of the sector, when the Rio Alliance was just trying to halt the Westphalian invasions.

He took a look around. The damage hadn't befallen them fast enough that any of the corpses of his crew remained here on the bridge with him, but he knew that their ghosts would haunt him angrily for denying them a proper burial at sea in a place where their kin could perhaps come visit one day.

But his duty came first.

"This is your final warning, Ajax," the Westphalian CommandWall vessel, the ship in charge over there, transmitted triumphantly.

He hadn't surrendered, even when it was inevitable. Just ordered his crew to abandon ship and prayed that the Alliance would be able to trade them home eventually.

Without him, most of the rest couldn't tell Westphalia anything they hadn't been able to read off their own scanners. An experimental warship, compact and deadly enough that Westphalian officers would warn each other about what had happened today.

They could be taught fear as well. Doubt. He just had to make sure the lesson would stick.

He unbuckled from his command seat and staggered across the bridge to where a starpilot had died not five minutes ago, when a shot finally speared the bridge hard enough to kill Ajax as well.

There was still blood on the chair and station as he sat, the remains of his pilot that would stick to the outside of his suit, but that was the cost of surviving this day. Of exacting some level of revenge on the very gods of fortune that had dropped the two forces into each other's laps.

He programmed the star drives to a spot where the scans had shown darkness. A star-birthing nebula so dense with gases and new fusion lights that they would never find his corpse or his ship, to discover what had happened today. Here There Be Dragons kind of place.

All the power that had been running the Kirov got channeled into the star drives instead, leaving the shields as strong as they had been for most of the battle.

He stared once more at the shattered remains of a Westphalian GunWall and smiled.

He didn't believe it for a moment, but he still snarled the thought at them, as if his terrible rage alone would be enough to touch his enemies from beyond whatever grave he was about to consign himself and his ship to.

I will return for you.

And then he slammed a palm down on the controller and leapt into infinity.