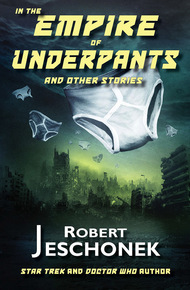 In the Empire of Underpants and Other Stories by Robert Jeschonek

Tomorrow's here, and it's weirder than you can imagine! Find out just how weird it gets in this collection of 18 mind-blowing science fiction tales by USA Today-bestselling Star Trek and Doctor Who author Robert Jeschonek. Don't miss these stories of sentient underwear, a zombie-fighting robot priest, hallucinatory hippos, hyper-advanced chickens, talking snack cakes, murderous slapstick robots, warriors who kill for love, and a world where standing still means certain death. This treasury of stories, gathered together for the first time anywhere, will shine a light on possible futures that are closer than you think…and so far beyond anything you know, you might not be able to find your way back.

I soar through the air, my white hyper-cotton body bunching and rolling on the soft morning breeze. Times like this, I feel fine and free, a pair of smart-briefs gliding through nature like a bird or a cloud.

But then I always come back down to earth in the end.

My left leg loop catches on the tip of a branch, and I swing to a stop. While I'm up there, I sing a little song, as my kind loves to do, in praise of the morning and being alive—a true classic.

"We can't wait to get in your pants." My high-pitched voice is generated by the sound threads woven into my fly, which flutters when I sing. "We will fill your drawers with joy."

It's a commercial jingle, one of many that once advertised my particular brand of genius undies. I sing it loud, though there aren't any commercials these days—and then I change the words, asking one of the great questions of life in the modern world.

"What does a left leg loop feel like around an actual left leg?" That's the question of which I sing this time. It's a question I sing about often, as if I'll ever know the answer.

Which of course I won't. All the left legs are gone now. All the live, human ones, that is, and the humans they belonged to.

When I'm done singing, I contract and twist the smartlastic fibers in the caught leg loop, working my way off the branch. I drop to the ground below, which is still muddy from last night's rain, and land with a flop.

"No problemo!" Mud becomes a real nothing-burger when you've got my mad skills.

As a true smart brief, the most advanced underwear ever designed, I was made to repel dirt and moisture with a flick of my hyper-cotton panels. Chemical films baked into the threads push contaminants right off, leaving behind only my bright white material that looks like it's just been through the wash...though it never needs laundering. And that's a good thing, on a journey like mine.

Because I've been on the move for weeks...

...months, my internal timer corrects me...

...and who knows when I'll get to enjoy the comforts of home again.

It's a price worth paying, though, being on the road for so long. If I succeed, I might find a cure for the sickness that's afflicting my fellow smart-underpants back home. I might find the fabled Magic Panties of the Plains, the ones with the healing powers beyond the ken of AI folk like me.

That's "AI" as in "Apparel Intelligence," in case you're wondering.

On the way to my next destination, I squirm and roll through the muck at a breathtaking ground speed of a few feet per minute. In the old days, briefs like me traveled the world at incredible speeds, worn by human folk who raced around in cars or flew in airplanes or rockets. What must it have been like to be a tighty whitey in those glorious times?

If only all the humans hadn't died out in the Great Erection a decade ago, I might have had the chance to find out.

"You'll never be lost again. These briefs are your best friend." It's another song of the lost humans, a commercial jingle, and I sing it as I go. "Wherever you land/if you sit, run, or stand/you'll know you've got a buddy in your pants." I sing it as if those vanished folk are more to me than a thousand million facts and images bubbling in the database of my woven-in AI mind. I sing it as if I ever even saw a living, breathing human in the flesh, let alone filled my body with its form.

But I had just been sparked to life in a factory by robotic underpants engineers when the Great Erection had its way with humanity. It was my curse, since I never got to know human folk...and also my salvation. For if I'd been worn by a human when the end came for that species, I would have had a much harder time escaping to the outside world to begin my new life.

Rolling myself up in a tube, I wriggle through a thicket of thorny bushes and never catch a single snag.

"Underpants power!" It's a little something I say sometimes when I kick ass.

Unrolling on the other side of the thicket, I flex my elastics—then hear the soft keening on the breeze and realize I'm not alone.

"Need a bosom buddy? Never fear. Pack your rack in our brainy brassiere." It's sung with an accent, but I've heard the words before. Even before I look around, I know who's singing them. "We're all about a wiser bust. We support the higher you." Anywhere I've ever been, that's the song of a smart-bra, plain and simple.

And there are more smart-bras in the clearing before me than I've ever seen in one place before. They are strung on a tall, stout tree, shrouding it completely as if they'd grown there.

They must have flown here like me, by looping elastic on something sturdy, pulling back as far as they could, and slingshotting into the wind. But this tree must block a flight path, catching errant bras as they pass with cups flapping and straps fluttering like streamers.

I call out to them to the tune of a bra-song I know, substituting my own words for the classic lyrics. "How did you all get here? What happened to you?"

Every bra on the tree starts yelling at once. Hundreds of voices of all pitches and timbres clamor for attention, drowning each other out.

"Wait! Please!" I shout, with the gain on my sound threads cranked all the way up. "One at a time!"

But the lot of them just keep jabbering. And it keeps getting louder.

I try again. "What happened to you?"

More babble. If there's a straight answer here, I can't make it out.

Something happened to these smart-bras, but what? How and why would so many of them malfunction or go crazy at once?

And what if it's something that could do the same to me?

I wish I could help them. They're kindred garments, cut from the same cloth.

But the folks at home are depending on me. If I don't make it back soon with a cure from the Magic Panties, they might all be dead.

As much as underpants and bras go together, I need to stick to my mission. I can't risk getting pulled away by a bunch of lingerie.