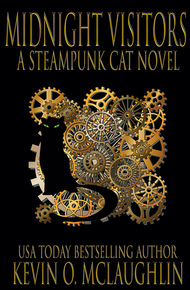 When a cat's person becomes targeted for assassination, what's the poor feline to do? Save the day with tooth, claw, and brains, of course!

Noelle has seen it all as a street cat – or so she thought. Adopted by one of the foremost inventors of the kingdom, life has been pretty good. But everything changes when a rival uses his tech toys with murderous intent.

She'll have to pull out all the stops to save her person. And maybe use up a couple of those nine lives. But if they think she'll stand idly by when her person is in danger, they're in for a rude surprise!

Noelle opened one eye lazily, viewing the world through the narrowest slit, and let her tail drift down from her nose. She was as tired as a cat could be. It had been a long night, and she knew tonight would be more of the same. She'd more than earned her nap, but Noelle had heard her name called, which would never cease to pique her curiosity, if not her interest.

"Noelle, there you are!" Her person ambled amiably over to where she rested on the windowsill, carefully setting aside the candle he carried to avoid singing her fur. His name was Henry, and he was old but rather wise as these two legged beings went. Not a cat, no. But a good being. He'd taken her in on a cold night in the middle of winter, and given her a spot by his warm fireplace and a name that had something to do with a human celebration. When one of his friends said he should dump her back out in the snow – talking about black cats being bad luck – Henry had scoffed at the notion.

She'd gone on to train him well, these past three years. And somewhere along the line, to the wonder of the foot-free cat she'd been before, she'd become his as much as he was hers.

To illustrate the point, she sat up, looked up at him with blinking eyes, and gave a soft "Mreow?"

He reached into a pocket of his waistcoat, fishing about for some of the small morsels he regularly carried there for her. He was a good person, and this was a good place. She was glad she'd found it, even if there were...difficulties.

Henry plunked the first tidbit down in front of her nose. She gave it a few dainty sniffs before wolfing it down. Just for appearances, of course. One could never seem to be too eager. It had been work training her human, and she knew better than to let that slip, even for a moment. No matter how fond she had grown.

"You're a good cat," Henry said, laying another treat down for her. She gulped that one down too. "I just don't understand why you won't chase the mice like other cats do!"

He sighed, stroking her fur absently. She purred in response. The answer to his question would have been obvious, if he'd been a cat. But he wasn't, so she had to make due as best she could.

"They were into the grain again last night. I found one bag chewed open, spilled all over the floor of the closet."

Noelle kept up her purring, and he continued stroking her.

"A good cat," Henry said again. He closed his eyes, relaxing. "If you would only deal with the mice, please. I have enough to worry about. My invention must be complete by the end of the week, or the King will withdraw my funding." He opened his eyes again, and Noelle matched his bright blue gaze with her own yellow eyes. "He told me so himself, you know. Me! In an audience with royalty!"

The old man jumped back to his feet, alive with an energy that belied his years. "It's back to work for me, then!" he cried. Noelle canted her head sideways a bit, letting his renewed enthusiasm wash over her like the heat of a sunbeam. "Much to do!" Henry rushed from the room.

Then returned, peeking around the corner of the doorway to smile at Noelle. "And you rest. I am sure you will find a way to solve the problem of our midnight visitors." With that, he was gone – returned to his workshop upstairs.

Noelle exhaled slowly, settling back into the windowsill. If only he knew how big a problem they really had with midnight visitors. He wouldn't be so worried about the mice, then.