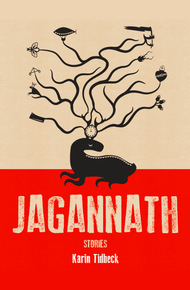 "Karin Tidbeck lives and works in Malmö, Sweden. She's published prose and poetry in Swedish since 2002, with publications in journals like Jules Verne-magasinet and Lyrikvännen. Her English publication history includes Weird Tales, Tor.com, Lightspeed Magazine and the anthologies Steampunk Revolution and The Time-Travelers Almanac. Her 2012 short story collection Jagannath won the Crawford Memorial Award in 2013 and was shortlisted for the Tiptree Award and World Fantasy Award. One of the stories, "Augusta Prima", won the SF & Fantasy Translation Award."

Enter the strange and wonderful world of Swedish sensation Karin Tidbeck with this feast of darkly fantastical short stories. Whether through the falsified historical record of the uniquely weird Swedish creature known as the “Pyret” or the title story, “Jagannath,” about a biological ark in the far future, Tidbeck’s unique imagination will enthrall, amuse, and unsettle you. How else to describe a collection that includes “Cloudberry Jam,” a story that opens with the line “I made you in a tin can”? Marvels, quirky character studies, and outright surreal monstrosities await you.

Franz Hiller, a physician, fell in love with an airship. He was visiting a fair in Berlin to see the wonders of the modern age that were on display: automobiles, propeller planes, mechanical servants, difference engines, and other things that would accompany man into the future.

The airship was moored in the middle of the aviation exhibit. According to the small sign by the cordon, her name was Beatrice.

In contrast to the large commercial airships, Beatrice is built for a maximum of two passengers. An excellent choice for those who live far from public airship masts or do not wish to be crowded in with strangers. Manufacturing will start soon. Order yours today, from Lefleur et Fils! Franz had had no previous interest in airships. He had never seen one up close, let alone travelled in one. Neither had he any interest in love. At thirty, he was still a bachelor; his prospects were good, but he had been profoundly disinterested in any potential wives his parents had presented to him. His mother was becoming more and more insistent, and sooner or later Franz would have to make up his mind. But then he found himself here, in Berlin, facing this airship: Beatrice, her name tolling like a bell.

Franz couldn't stop looking at her. Her body was a voluptuous oblong, matte skin wrapped tightly over a gently rounded skeleton. The little gondola was made of dark wood (finest mahogany!) and embellished with brass details (every part hand-wrought!), with thick glass windows that rounded at the edges. Inside, the plush seat was embroidered with French lilies, facing an immaculately polished console. Beatrice was perfect. She bobbed in a slow up-down motion, like a sleeping whale. But she was very much awake. Franz could feel her attention turn to him and remain there, the heat of her sightless gaze.

He came back the next day, and the next, just to look at Beatrice and feel her gaze upon him. They could never touch; he once tried to step inside the cordon but was brusquely reprimanded by the guards. Franz could sense the same want from her that filled him, a longing to be touched.

He sought out the representative of Lefleur et Fils, Lefleur the younger, in fact: a thin man with oil-stained fingers who looked uncomfortable in his suit. Franz offered to buy Beatrice outright; he would write a check on the spot, or pay in cash if needed. Out of the question, Lefleur the younger replied. That airship there was a prototype. Not at any price? Not at any price. How could they start manufacture without the prototype? Of course, monsieur Hiller was welcome to order an airship, just not this one.

After two weeks, the fair closed. Beatrice was taken home to Lefleur et Fils' factory in Paris. Franz fantasised about travelling to the factory, breaking into it at night and stealing her; or pleading his case to the owners, who would be so touched by his story that they would let go of her. Franz did none of this. Instead, he moved out of his parents' home, much to their consternation, and left for Berlin where he found new employment and rented a warehouse on Stahlwerkstrasse. Then he placed an order.

Two months later, a transport arrived at the warehouse on Stahlwerkstrasse. Four burly men who didn't speak a word of German unloaded four enormous boxes, and proceeded to unpack the various parts of a small airship. When they left, an exact copy of Beatrice was moored in the warehouse.

The realization dawned on Franz, as he stood alone in the warehouse studying his airship. This new Beatrice was disinterested. She hovered quietly in the space without a trace of warmth. Franz walked along her length. He stroked her skin with a hand. It was cool. He traced the smooth, polished mahogany of her gondola with his fingers, breathing in the aroma of fresh wood and varnish. Then he opened the little door and gingerly seated himself inside, where a musky undertone mingled with the smells of copper and fresh rubber. He imagined that it was Beatrice. He summoned the sensation of warm cushions receiving him, how she dipped under his weight. But this Beatrice, Beatrice II, had a seat with firm stuffing that didn't give.

"We'll manage," said Franz to the console. "We'll manage. You can be my Beatrice. We'll get used to each other."