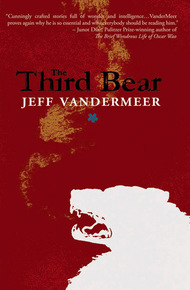 The Third Bear by Jeff VanderMeer

The award-winning short fictions in this collection highlight the voice of an inventive contemporary fantasist who has been compared by critics to Borges, Nabokov, and Kafka. In addition to highlights such as "The Situation," in which a beleaguered office worker creates a child-swallowing manta ray to be used for educational purposes and "Errata," which follows an oddly familiar writer who has marshaled a penguin, a shaman, and two pearl-handled pistols with which to plot the end of the world, this volume contains two never-before-published stories. Chimerical and hypnotic, this compilation leads readers through the postmodern into what is emerging into a new literature of the imagination.

It made its home in the deep forest near the village of Grommin, and all anyone ever saw of it, before the end, would be hard eyes and the dark barrel of its muzzle. The smell of piss and blood and shit and bubbles of saliva and half-eaten food. The villagers called it the Third Bear because they had killed two bears already that year. But, near the end, no one really thought of it as a bear, even though the name had stuck, changed by repetition and fear and slurring through blood-filled mouths to Theeber. Sometimes it even sounded like "seether" or "seabird."

The Third Bear came to the forest in mid-summer, and soon most anyone who used the forest trail, day or night, disappeared, carried off to the creature's lair. By the time even large convoys had traveled through, they would discover two or three of their number missing. A straggling horseman, his mount cantering along, just bloodstains and bits of skin sticking to the saddle. A cobbler gone but for a shredded hat. A few of the richest villagers hired mercenaries as guards, but when even the strongest men died, silent and alone, the convoys dried up.

The village elder, a man named Horley, held a meeting to decide what to do. It was the end of summer by then and the leaves had begun to disappear from the trees. The meeting house had a chill to it, a stench of thick earth with a trace of blood and sweat curling through it. All five hundred villagers came to the meeting, from the few remaining merchants to the poorest beggar. Grommin had always been hard scrabble and tough winters, but it was also two hundred years old. It had survived the wars of barons and of kings, been razed twice, only to return.

"I can't bring my goods to market," one farmer said, rising in shadow from beneath the thatch. "I can't be sure I want to send my daughter to the pen to milk the goats."

Horley laughed, said, "It's worse than that. We can't bring in food from the other side. Not for sure. Not without losing men." He had a sudden vision from months ahead, of winter, of ice gravelly with frozen blood. It made him shudder.

"What about those of us who live outside the village?" another farmer asked. "We need the pasture for grazing, but we have no protection."

Horley understood the problem; he had been one of those farmers, once. The village had a wall of thick logs surrounding it, to a height often feet. No real defense against an army, but more than enough to keep the wolves out. Beyond that perimeter lived the farmers and the hunters and the outcasts who could not work among others.

"You may have to pretend it is a time of war and live in the village and go out with a guard," Horley said. "We have plenty of able-bodied men, still."

"Is it the witch woman doing this?" Clem the blacksmith asked.

What Clem and some of the others thought of as a "witch woman," Horley thought of as a crazy person who knew some herbal remedies and lived in the woods because the villagers had driven her there, blaming her for an outbreak of sickness the year before.

No one could answer, least of all Horley. As Horley stared at all of those hopeful, scared, troubled faces, he realized that not all of them yet knew they were stuck in a nightmare.

Clem was the village's strongest man, and after the meeting he volunteered to fight the beast. He had arms like most people's thighs. His skin was tough from years of being exposed to flame. With his full black beard he almost looked like a bear himself.

"I'll go, and I'll go willingly," he told Horley. "I've not met the beast I couldn't best. I'll squeeze the ‘a' out of him." And he laughed, for he had a passable sense of humor, although most chose to ignore it.

Horley looked into Clem's eyes and could not see even a speck of fear there. This worried Horley.

"Be careful, Clem," Horley said. And, in a whisper, as he hugged the man: "Instruct your son in anything he might need to know, before you leave. Make sure your wife has what she needs, too."

Fitted in chain mail, leathers, and a metal helmet, carrying an old sword some knight had once left in Grommin by mistake, Clem set forth in search of the Third Bear. The entire village came out to see him go. Clem was laughing and raising his sword and this lifted the spirits of those who saw him. Soon, everyone was celebrating as if the Third Bear had already been killed or defeated.

"Fools," Horley's wife Rebecca said as they watched the celebration with their two young sons.

Rebecca was younger than Horley by ten years and had come from a village far beyond the forest. Horley's first wife had died from a sickness that left red marks all over her body.

"Perhaps, but it's the happiest anyone's been for a month," Horley said.

"All I can think of is that he's taking one of our best horses out into danger," Rebecca said.

"Would you rather he took a nag?" Horley said, but absent-mindedly. His thoughts were elsewhere.

The vision of winter would not leave him. Each time, it came back to Horley with greater strength, until he had trouble seeing the summer all around him.

Clem left the path almost immediately, wandered through the underbrush to the heart of the forest, where the trees grew so black and thick that the only glimmer of light came from the reflection of water on leaves. The smell in that place carried a hint of offal.

Clem had spent so much time beating things into shape that he had not developed a sense of fear, for he had never been beaten. But the smell in his nostrils did make him uneasy.

He wandered for some time in the deep growth, where the soft loam of moss muffled the sound of his passage. It became difficult to judge direction and distance. The unease became a knot in his chest as he clutched his sword ever tighter. He had killed many bears in his time, this was true, but he had never had to hunt a man-eater.

Eventually, in his circling, meandering trek, Clem came upon a hill with a cave inside. From within the cave, a green flame flickered. It beckoned like a lithe but crooked finger.

A lesser man might have turned back, but not Clem. He didn't have the sense to turn back.

Inside the cave, he found the Third Bear. Behind the Third Bear, arranged around the walls of the cave, it had displayed the heads of its victims. The heads had been painstakingly painted and mounted on stands. They were all in various stages of rot.

Many bodies lay stacked neatly in the back of the cave. All of them had been defiled in some way. Some of them had been mutilated. The wavery green light came from a candle the Third Bear had placed behind the bodies, to display its handiwork. The smell of blood was so thick that Clem had to put a hand over his mouth.

As Clem took it all in, the methodical nature of it, the fact that the Third Bear had not eaten any of its victims, he found something inside of him tearing and then breaking.

Almost sadly, with a kind of ritual grace, the Third Bear pried Clem's sword from his fist, placed the weapon on a ledge, and then came back to stare at Clem once more.

Clem stood there, frozen, as the Third Bear disemboweled him.