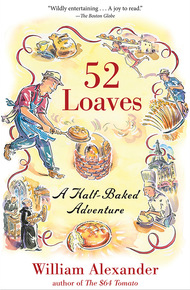 William Alexander is the author of the best-selling memoir, "The $64 Tomato," and "52 Loaves: A Half-Baked Adventure," his hilarious and moving account of a year spent striving to bake the perfect loaf of bread.

His latest book is "Flirting With French," about his often riotous attempt to fulfill a life-dream of learning French.

The New York Times Style Magazine says about Alexander, "His timing and his delivery are flawless." He has appeared on NPR's Morning Edition, at the National Book Festival in Washington, DC, and was a 2006 Quill Book Awards finalist. Alexander has been a frequent contributor the New York Times op-ed pages, where he has opined on such issues as the Christmas tree threatening his living room, Martha Stewart, and the difficulties of being organic.

When not gardening, baking, or writing, Bill keeps his day job as director of technology at a psychiatric research institution, where, after 36 years, he persists in the belief that he is a researcher, not a researchee.

William Alexander is determined to bake the perfect loaf of bread. He tasted it long ago, in a restaurant, and has been trying to reproduce it ever since. Without success. Now, on the theory that practice makes perfect, he sets out to bake peasant bread every week until he gets it right. He bakes his loaf from scratch. And because Alexander is nothing if not thorough, he really means from scratch: growing, harvesting, winnowing, threshing, and milling his own wheat.

An original take on the six-thousand-year-old staple of life, 52 Loaves explores the nature of obsession, the meditative quality of ritual, the futility of trying to re-create something perfect, our deep connection to the earth, and the mysterious instinct that makes all of us respond to the aroma of baking bread.

My heart was pounding so hard at the airport security checkpoint, I was certain the TSA agent would see it thrusting through my jacket.

"Laptop," I blurted out for no apparent reason, my voice cracking like a teenager's on a first date as I placed my computer into the plastic tray.

"Liquids." The TSA inspector held up my regulation Baggie stuffed with three-ounce bottles and nodded approvingly.

I reached into my backpack and casually pulled out a half-gallon plastic container filled with a bubbling, foul-smelling substance. "Sourdough." I might just as well have said, "Gun!"

"Uh-uh, you can't bring that on a plane!" a TSA official stationed at the next line called out. I wanted to say, "Who asked you?" but sensibly kept my mouth shut as I looked around nervously. Thanks to that blabbermouth, every passenger and TSA employee at the security checkpoint was looking my way.

"Can he bring dough?" another inspector yelled.

A buzz had now started, with murmurs of "dough" audible from the passengers behind me, all of whom, I'm sure, hoped they weren't on my flight.

A tense and chaotic ten minutes later, I found myself talking with a stone-faced supervisor.

"Sourdough?" He sighed with the heavy air of someone who didn't want to deal with a situation—any situation.

"Twelve years old!" I beamed. So that I could say it wasn't a liquid and thus subject to the three-ounce rule, I'd added half a pound of flour to the wet sourdough before leaving the house. Unfortunately, this had the effect of stiffening it into something with an uncanny resemblance to plastique explosive. As the supervisor started to run a wand around it, I held my breath, half expecting it to beep myself.

"A thirteen-hundred-year-old monastery in France is expecting this," I offered.

His trained poker face remained blank, forcing me to pretend he'd asked why.

"They managed to keep science, religion, and the arts alive during the Dark Ages, even risking their lives to protect their library from the barbarians who burned everything else in sight. After thirteen centuries, though, they've forgotten how to make bread."

Still no reaction. None. Trying to lighten the mood, I added, "The future of Western civilization is in your hands."

That bit of hyperbole got his attention. "You're a professional baker?"

He arched an eyebrow. But no matter. Whatever transpired in the next few minutes, I was boarding that plane with my starter. I had to. During nearly a year of weekly bread making, I'd disappointed my wife, subjected my poor kids to countless variations on the same leaden loaf, and, most of all, let myself down, time and time again, loaf after loaf, week after week. Well, I was not going to let down the monks at l'Abbaye Saint-Wandrille de Fontenelle.

Granted, I was as unlikely a savior of a monastery as you could imagine—a novice baker who'd lost his faith and hadn't set foot in a church in years, carrying a possibly illegal cargo of wild yeast and bacteria practically forced on me by an avowed atheist—but nevertheless I was determined to succeed, for I was on a mission.

A mission from God.